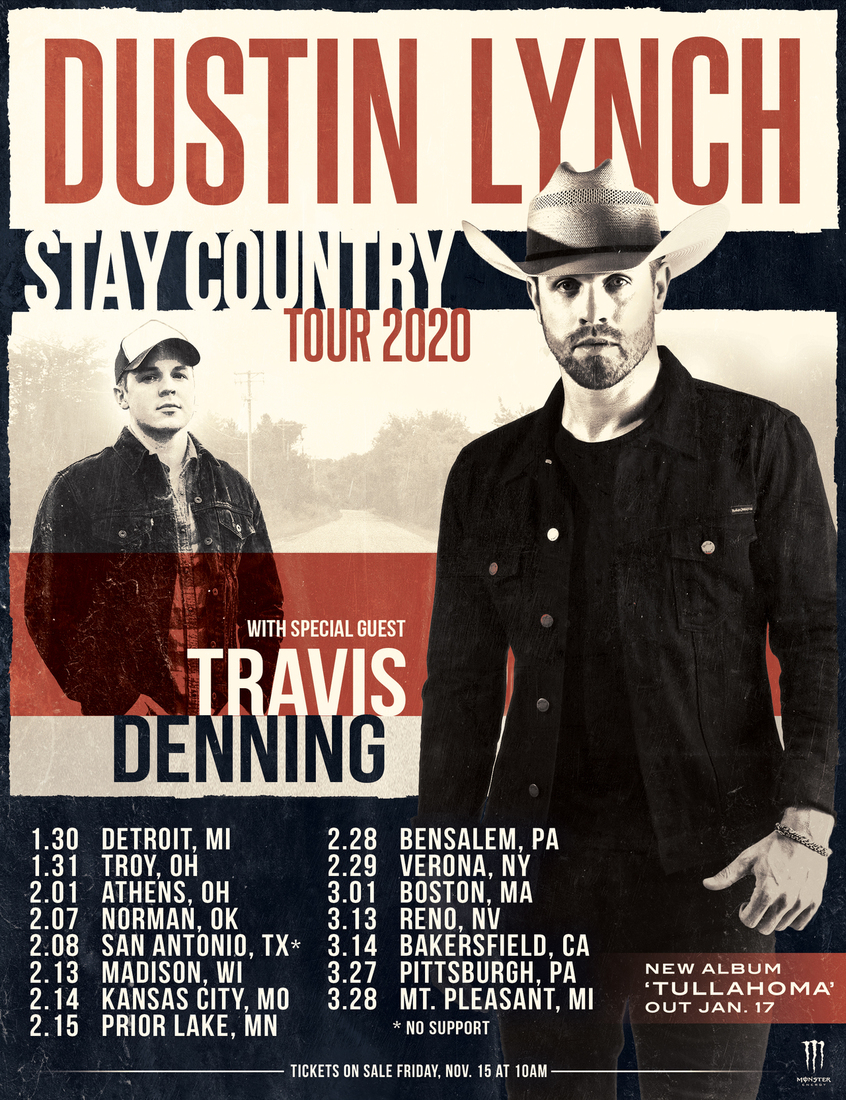 Broken Bow Records hitmaker DUSTIN LYNCH is using his fourth album to recount the Country saga of a true “Small Town Boy,” setting January 17 for the release of TULLAHOMA.

Named after the acclaimed star’s Tennessee hometown, the ambitious
self-portrait comes after eight years of sustained success including six
#1s, six GOLD and PLATINUM certifications and membership in the
historic Grand Ole Opry – but it finds Lynch taking stock of himself
like never before.

“It’s all about me and growing up in my hometown,” he explains. “Every
song on this album points to something that happened to me or my close
friends and family, and that’s really cool. I’m very proud of where I’m
from, and proud of this record because it will hopefully make my
hometown a little more famous than it already is.”

Incorporating the three songs on Lynch’s RIDIN’ ROADS EP – including his current single of the same name – and most-recent #1 “Good Girl,” TULLAHOMA
marks a creative step forward for both the artist and his
co-writer/co-producer, Zach Crowell. The longtime friends spearheaded
the project from start to finish – the first time Lynch has used a
single producer for a whole album – letting a universal story about
coming of age and discovering yourself unfold.

“I’ve done a lot more living than I’ve done in the past, because this is
the first time I’ve been able to tour and also feel like I have a life
outside of that,” says the hard-working artist, who just finished
another milestone year on Thomas Rhett’s VERY HOT SUMMER TOUR.

“It’s figuring out what I enjoy about life the most – outside of music.
The kind of stuff my mom and dad, my family and my friends back home did
growing up. Outdoors stuff like hunting and fishing, hanging out in the
backyard around a bonfire, just connecting. I long to be that kid
again, and I think we all do. You get to a certain point in life and
start reflecting on why you’re where you’re at … and I’ve just figured
out that’s what makes me tick. That’s why I work hard.”

In addition to the album, Lynch is also announcing his next headlining
run – fittingly dubbed the STAY COUNTRY TOUR 2020. Kicking off January
30 in Detroit, Michigan, the trek will crisscross the entire U.S. with
opener TRAVIS DENNING.

Tickets for select dates of the STAY COUNTRY TOUR 2020 go on sale
Friday, November 15 at 10 a.m. local time, and a portion of each sale
will benefit The Cowboys and Angels Fund
– which supports various philanthropic causes including an intentional
focus on children’s charities. The Cowboys and Angels Fund was
established by Lynch in 2018 at The Community Foundation of Middle
Tennessee to help to make a difference in the lives of those in need.

A native of Warner Robins, Georgia, singer/songwriter Travis Denning’s
current Top 40 single “After A Few,” is ascending the country radio
charts. The “memorable” song showcases Denning’s “future star power” (Billboard)
and was co-written by Denning with Kelly Archer and Justin Weaver. The
track follows his Top 40 debut single “David Ashley Parker From Powder
Springs.” The Mercury Nashville recording artist is out on the road this
fall with Riley Green, with dates continuing through the end of the
year. Denning has previously opened shows for Cole Swindell, Alan
Jackson, LANCO and when he is not touring, he is in the studio working
on his debut album. Denning has been spotlighted by Rolling Stone
for his “everyman worldview that evokes his small-town, big-hearted
upbringing and a sound that is a wide tent – fun, modern country with
rock-guitar licks” and was selected this past year as an Opry NextStage
recipient and CMA KixStart Artist, as he makes his mark within the
industry. Inspired at a young age, Denning developed a love for Country,
pop, rock and heavy metal and started playing local bars from the age
of 16, as he built a strong following from his distinctive songs and
raucous guitar solos. Denning moved to Nashville and secured outside
cuts by Jason Aldean, Justin Moore, Michael Ray and Chase Rice. A
prolific writer with an unquestionable stage presence, Denning caught
the attention of Universal Music Group and signed a record deal in 2017.
For more information, visit travisdenning.com.