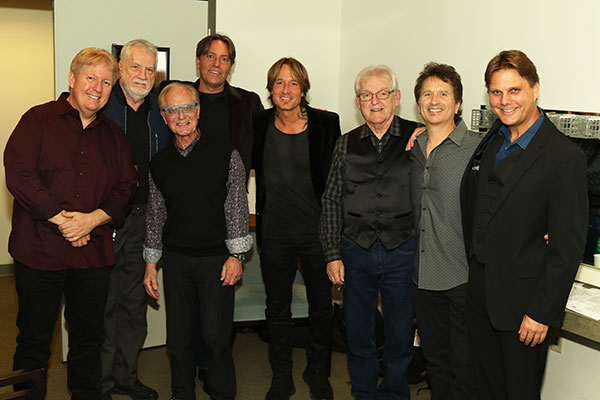 Over a three-day period, country music history was made as Don Williams: Music & Memories of The Gentle Giant
premiered at the Schermerhorn Symphony Center with the Nashville
Symphony, original members of Don’s band and never before seen video
footage of Don Williams live in concert from around the world.

As the show opened, those in attendance gazed at the 25-foot wide video
screen, which flashed album covers, photos and footage highlighting
Don’s nearly 50-year career in country music all while the Nashville
Symphony performed a specially crafted overture. Keith Urban, who made a
surprise appearance on Saturday night to watch the show he curated,
popped up on the video screen to explain the concept of the show and to
set the tone of the evening on what people would be witnessing. Then the
night came to life!

Members of Don’s touring band, 5 in total, along with the Nashville
Symphony kicked off a night of music that included twenty-five of Don’s
most recognizable songs. From “Good Ole Boys,” to “Some Broken Hearts
(Never Mend),” to “Tulsa Time,” to “I Believe In You,” all songs
showcased just how powerful Don’s baritone voice, laid back personality
and delivery of songs inspired and affected people of all backgrounds
while proving that music has no boundaries. The video footage, which
came from Africa, Ireland, and Branson, spanned from the 1980’s to 2014
and highlighted Don’s massive international appeal.

“When first hearing the concept of this show, it was hard to comprehend
bringing a show together with the original band, a full symphony and Don
Williams on a big screen and it actually working,” says Adam Marshall, a
fan who attended all three nights. “I just didn’t understand it, but as
a Don Williams fan I wanted to see it. After the first night I bought
tickets for the next two shows. When I closed my eyes, I truly believed
Don was sitting on his stool and singing to me live on stage. A few
times during the show it was very chilling and surreal, especially
towards the end when Don interacts with the audience as if he was really
there performing and the audience was singing back to him.”

Much like the touring shows that involve Elvis, Roy Orbison and others,
Don Williams will hit the road in 2020 breaking boundaries and making
the Country Music Hall of Famer the first country artist to tour
post-death.

Subsequent moves to Capitol Nashville and RCA kept Williams on the
charts into the 1990s, as he continued to play for huge crowds on the
road. His success in the United States is well-documented, but the music
of Don Williams has made him an international star – with followings in
such places as Africa, England and New Zealand. He has placed 52
singles in the top-40 on the Country charts in the United States, with
17 going all the way to the top spot. Williams was a member of The
Country Music Hall of Fame and The Grand Ole Opry. Williams appeared in
the films W.W. and the Dixie Dancekings and Smokey & The Bandit II with Burt Reynolds.