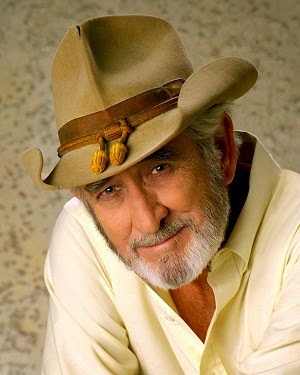 Nashville,
Tenn. (March 27, 2015) – With his easy-going style and laid back
nature, Don Williams has become one of Country Music’s most-beloved
performers both in the United States, as well as abroad. Williams
announces the Spring and Fall legs of his 2015 tour, bringing his hits
to fans old and new.

“Mercy, the fans have kept us going for years, and I am glad to share the music with them once again,” says Williams.

Williams first came to prominence in the 1960s as a member of the
folk group The Pozo-Seco Singers. The trio recorded several hit records,
with the biggest being “Time.” By 1971, Williams had gone solo, and had
signed a publishing deal with Jack Clement. The Hall of Fame producer
was so taken with Don’s style that he offered him a recording contract
with his JMI Records in 1972. Early hits included “Atta Way To Go” and
“Come Early Morning,” as well as “We Should Be Together,” which became
his first Billboard top ten hit from 1974. He then moved to ABC
/ Dot (Later MCA), where the hits increased. Tracks such as “Rake and
Ramblin’ Man,” “Tulsa Time,” and “Nobody But You” helped to make him one
of the most-played artists on Country Radio in the 1970s and 1980s. He
took home the Male Vocalist of the Year trophy from the Country Music
Association in 1978, and notched his biggest hit in 1981 with “I Believe
In You,” which also crossed over to the top-30 on the Hot 100.

Subsequent moves to Capitol Nashville and RCA kept Williams on the
charts into the 1990s, as he continued to play for huge crowds on the
road. His success in the United States is well-documented, but the music
of Don Williams has made him an international star – with followings in
such places as England and New Zealand. He has placed 52 singles in the
top-40 on the Country charts in the United States, with 17 going all
the way to the top spot. Williams was a member of the Grand Ole Opry in the 1980s, and appeared in the films W.W. and the Dixie Dancekings and Smokey & The Bandit II with Burt Reynolds.

Williams’ most recent album was 2014’s Reflections, which
earned the singer his highest peak on the Country Album chart in three
decades. Known as “The Gentle Giant,” Williams was inducted into the
Country Music Hall of Fame in 2010.