DOLLY PARTON MOVES UP THE OFFICIAL UK CHART LANDING AT NUMBER 2, HER HIGHEST CHARTING ALBUM POSITION WITH BLUE SMOKE – THE BEST OF ALBUM 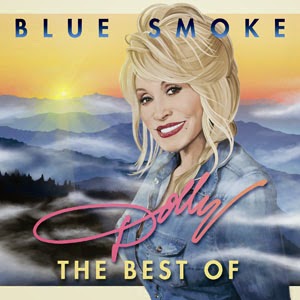 London,
England (July 27, 2014) – Even two weeks after Dolly Parton returned to
America from Europe, where she performed to SOLD OUT shows, Dolly is
making headlines with the continued growth in album sales of Blue Smoke – The Best Of.  In its seventh week since release, Dolly, once again, made history as Blue Smoke – The Best Of
climbs the Official UK chart to Number 2, her highest ever album chart
position.  The album debuted at Number 6, moved up to Number 4 where it
remained a few weeks, then jumped to Number 3.  No slowing down for
Dolly!

“Wow, Number 2!,” says Dolly Parton.  “I am so excited.  They say
when you are Number 2, you try harder. Thanks to all the fans out there,
as this would not be possible without all of your love and support.
Thanks again!”

With the recent success of her first two single’s “Home,” and “Try,”
as well as the album’s worldwide success and her amazing and now
legendary Glastonbury appearance, Dolly Records and Sony Music
Masterworks are releasing “Lay Your Hands On Me,” a song penned by
Richie Sambora and Jon BonJovi.  Fans who attended night one of Dolly’s
“Sold Out” show at London’s O2 Arena caught a piece of history as Richie
Sambora graced the stage to create an unparalleled performance.  And if
it couldn’t get any better, the 150,000+ fans who attended Glastonbury
received an encore performance as Sambora just couldn’t get enough
Dolly.

Blue Smoke – The Best Of, includes Dolly’s 42nd studio album Blue Smoke
featuring tracks “Home,” “Blue Smoke,” “Try,” and the new duet with
long-time collaborator and friend Kenny Rogers! Alongside comes her
greatest hits on Disc 2 featuring the classics such as “Jolene,” “9 to
5,” “Islands in the Stream,” “Little Sparrow,” “Here You Come Again,”
and “I Will Always Love You,” plus many more.

Dolly remains the most honored female country performer of all time.
She has achieved 25 RIAA certified gold, platinum and multi-platinum
awards, and had 25 songs reach Number 1 on the Billboard Country charts,
a record for a female artist. She has 42 career top 10 country albums
and she has 110 career charted singles over the past 40 years.
All-inclusive sales of singles, albums, hits collections, paid digital
downloads and compilation usage during her Hall of Fame career have
topped a staggering 100 million records worldwide.