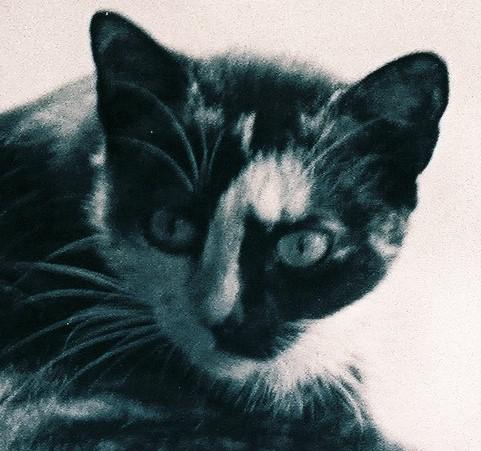 From the very beginning, when we first brought Skeeter home with us Swampy had taken a ‘big brother’ and very protective attitude towards her. As time went on it became obvious that the two of them had developed a strong loving bond. That is quite different from many dog and cat stories. But we were living a different lifestyle than most people who own dogs or cats.

Many a morning I’d wake up, and look out my front door, and on my front porch I would see happiness and contentment at its finest. Swampy and Skeeter would be cuddled up together, and sound asleep in the little wooden house I had built for Swampy. What a beautiful, heart-warming sight it was. Love can be wonderful. And to see it, and know it every day is even more wonderful.

For the most part the two of them lived outside, and they seemed to enjoy it. At feeding time, and several other special occasions they would come inside with me. One such extra special occasion occurred on a hot and sultry mid-August afternoon. I was sitting on the steps of the front porch enjoying the scenery and watching Swampy and Skeeter at play over by the wood pile. They sure knew how to have a good time, and it was real a pleasure to watch them. Skeeter would slap Swampy’s tail,and he’d turn around, and chase her a little ways. Sometimes they played with an old sock like two dogs would do. They were fun, and I enjoyed them.

Looking up at the huge Live Oak tree that shaded our house I noticed its leaves had begun turning slightly upside down. That is a strong indication that rain might be coming. The green tree frogs began to sing, and the cricket frogs joined in. We could also hear the sound of a narrow mouth toad. Out in the Okefenokee the daytime singing of the frogs is another very accurate barometer. It usually means that rain is on its way, or as in this case was just about here.

Sure enough, a moment later we heard the ominous crackling sound of thunder not far away. Clouds quickly began to form, blocking out the sun, and the wind suddenly picked up speed. We knew it was coming our way, and it was coming fast! Skeeter was paying no attention to the weather. She was now over by the big live oak tree playing with an acorn that one of our squirrel neighbors had mistakenly left behind.

The first lightning bolt struck just before the rain started pouring down. It was especially frightening because it struck just a short ways from where we were. Then the heavy down pour began. Our front porch had a roof over it, and I found myself running towards it. Swampy was hot on my heels. Skeeter was still playing over by the oak tree.

The second lightning bolt struck. It felt like it had landed right on top of us! And it almost did! It actually hit the huge oak tree where Skeeter was playing, not ten feet away from us. It went clean through the tree, splitting a part of its trunk and into the ground below! For one horrible second I saw Skeeter crinch up with every hair on her body standing straight out! In panic and pain she uttered a loud cry of helplessness and collapsed in a heap on the ground. My poor little cat had been struck by lightning! I jumped off the porch, and ran over to her. She was lying there on the ground motionless. As I picked her up I could not tell if she was breathing. Hurrying into the house with her in my arms, and close to my heart, I was praying, “Oh, God! Oh, God, please don’t let her die”! Once inside the house, I laid her limp body gently down on the couch and rushed to the closet to get her a towel! As I was drying her off, thank God she began to breathe! She was unconscious yet every now and then her body would move in a jerking fashion. I was not sure what else I could do for her. But since she was sound asleep I decided to just let her rest there on the couch. Every now and then I would check on her, especially to see if she was still breathing. In my desperately worried mind I did not know if she would live or not. She stayed unconscious on thecouch for two days. Not sure that she would make it, I worried about her and prayed for her the whole time………

……Thank God, she finally woke up. And when she did, she climbed down off the couch. And once again we were hearing that familiar Skeeter the Cat demanding meow. When I picked her upand held her in my arms. She began to purr contentedly. She seemed to have no ill after effects from her near death experience with the lightning. And apparently she had already forgotten about it. The whole time she had been unconscious she had been without water or food, so I brought her food and water bowls in from the porch, and filled them up. Purring like a happy healthy cat she ate and drank voraciously. And oh I felt a trememdous relief. Thank God Skeeter was back to normal….

There is a lot more to this story… www.okefenokeejoe.com