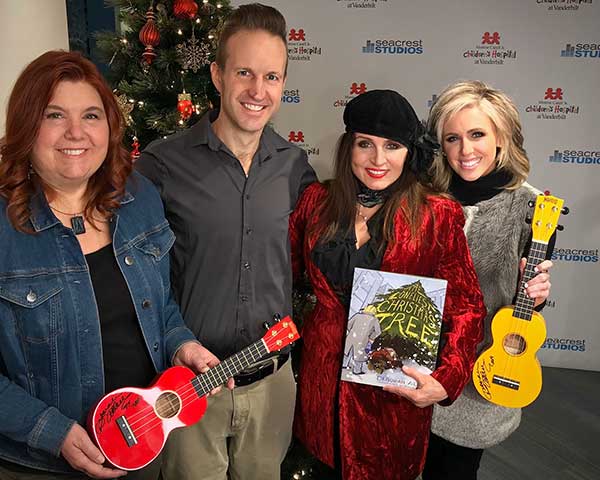 Country music veteran Deborah Allen helped spread holiday cheer to children in need this year by stopping by Seacrest Studios in the Monroe Carell Jr. Children’s Hospital at Vanderbilt, where she read her children’s book, The Loneliest Christmas Tree.
While there, Deborah made a special surprise presentation to the
Children’s Music Department by supplying 90 ukuleles for children who
are battling illnesses to learn and play, while staying in the hospital,
which were sponsored by REMRAF inc., Music and Arts and Davitt and
Hanser.

“Christmas is a wonderful time of love and giving. This year I was so
excited to stop by Seacrest Studios at Monroe Carell Children’s Hospital
at Vanderbilt to visit with the children and read my children’s book, The Loneliest Christmas Tree,”
says Allen. “It was an honor to have the opportunity to offer musical
inspiration by bringing beautiful ukuleles to children during this
joyous season through my relationship with good friend Shane Farmer.”

Deborah Allen’s The Loneliest Christmas Tree is in its second
printed edition, and is also now available as an audio / video book with
limited edition autographed copies at www.DeborahAllen.com.

To make a donation to Vanderbilt Children’s hospital, visit www.childrenshospitalvanderbilt.org/information/ways-help.

Allen also participated in the annual Christmas 4 Kids tour bus show at the Hendersonville Walmart where she was joined by other celebrity artists like 3 Doors Down, NSYNC’s Chris Kirkpatrick, T. Graham Brown, Mo Pitney
and many others. The event and celebrity shopping party benefits
underprivileged families and their children by giving them a special
opportunity to see the inside of the star’s tour buses, along with
meeting some of the music industry’s top artists before going on an
all-expenses paid shopping spree funded by the Christmas 4 Kids charity
and sponsor donations.

“Seeing the joy and excitement in the children’s eyes is what Christmas 4
Kids is all about!” said Allen. “It is so rewarding to be able to bring
happiness and delight to the children, but the truth is they are as
much a blessing to our hearts as we are to theirs. Christmas 4 Kids is a
beautiful circle of love.”

To make a donation to Christmas 4 Kids, visit www.Christmas4Kids.org.

Deborah Allen is one of those rare artists who forged their own path to
success and ended up building a world-class career in the process. An
extraordinarily talented singer, songwriter, producer and performer,
Deborah’s unique abilities as an artist may be matched only by her
enthusiasm and creativity as an individual. It is that formidable
combination of spirit and talent that keeps the Grammy-nominated
entertainer in demand.

Allen has penned more than 2,000 compositions for hundreds of artists,
including smash hits by LeAnn Rimes, Brooks & Dunn, Patty Loveless,
Conway Twitty, Tanya Tucker, Janie Fricke, John Conlee, Isaac Hayes,
Diana Ross, Sheena Easton, Fleetwood Mac and more. On her own, Deborah
climbed the charts with hits such as “I’ve Been Wrong Before,” “I Hurt
For You,” “Rock Me,” “If You’re Not Gonna Love Me,” “Wrong Side Of
Love,” “Break These Chains” and her signature song, “Baby I Lied.” In
some ways, “Baby I Lied” confirmed the idea that an artist could have
success in different formats with the same song – a precedent that would
prove to be years ahead of the crossover trends of today. “Baby I Lied”
not only appealed to Country and Pop radio listeners, earning multiple
Million Air-Play Awards in the process, but it also resulted in a pair
of Grammy nominations for the Delta songstress – one as a vocalist and
one as a songwriter.

Throughout her phenomenal journey of hits and accomplishments in every
facet of her career, Deborah Allen remains true to her vision. From her
discovery by Roy Orbison, to her friendship with Shel Silverstein, her
work with Prince, Deborah creates art entirely on her own terms. With a
distinguished career built on success after success as a performer,
songwriter and producer, the dynamic Delta singer from Memphis,
Tennessee, has no plans of slowing down anytime soon. That’s simply not
Deborah Allen’s style.