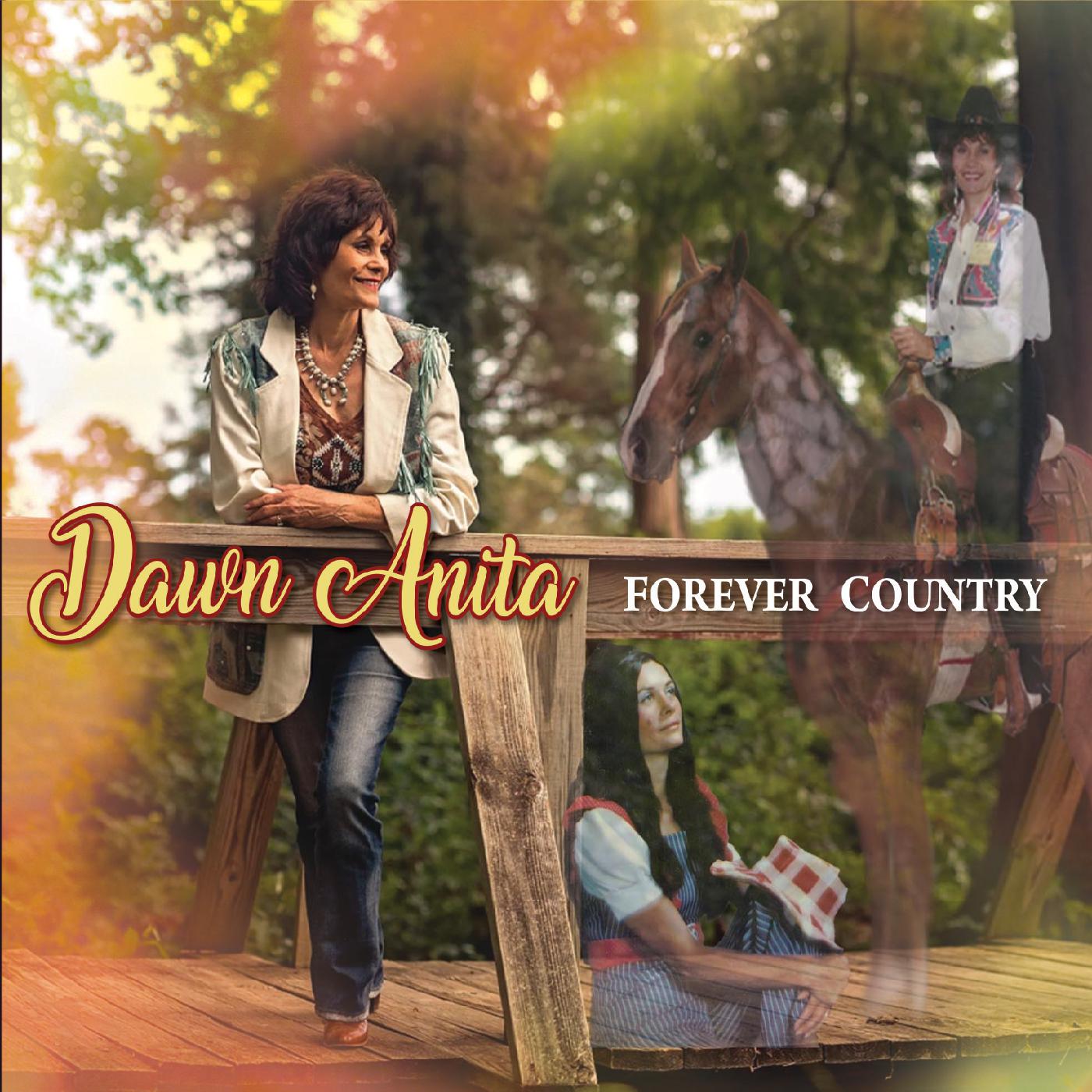 Born Dawn Anita Diffie, this woman of Country Music has lived an amazing musical world life from start to this very day as she continues to record and distribute the very best of Country, Western, and Western Swing which is played worldwide and shows no signs of slowing down.  Dawn has just released her latest Country Album aptly titled, “Forever Country”

The Diffie family has more than Dawn Anita in the light of music, Her nephew Joe Diffie actually started his professional career on the stage with Dawn Anita and she loves to tell that story today.  Her musical family spent many years singing together every time there was a family gathering. The following is from the words of Dawn Anita.  It has been an enlightening and rewarding experience to speak with this royalty of Country Music.  I share her words with you here.

“It’s hard to believe my career is now going on 51 years, and I am blessed to still be able to do what I love, .. write, record, perform and sing! I’ve recorded music lots of places in my career from Oklahoma to Dallas to Los Angeles to Nashville and places in between. I’ve been blessed to work with some of the finest musicians in all of those studios who made my music come alive. I have had the privilege of meeting and performing with so many stars, like Tanya Tucker, Johnny Rodriguez, Hank Thompson, Bill Mack, Leon Rausch, Mel Tillis, Willie Nelson, Johnny Russell, Kenny Serratt, Faron Young and Joe Diffie to name a few. If I had signed that recording contract in 1973 with RCA, I might now just be a ”has been,” but  Never Mind What Cou ld1ve Been, I’m  still going strong thanks to  all of the dj’s and radio stations who are still playing my music. Through the years I’ve recorded lots of material that has never officially been released, and this new album ”FOREVER COUNTRY” is a sampling of that music. I wrote or co-wrote eight of the songs on the album, there are two cover songs and two songs that were written by two of my song writing buddies. I be­ lieve this collection of songs will satisfy not only the traditional country music fans but will have broad appeal to lots of folks. 2020 was such a hard year for everyone and I was not able to get in the studio, so I decided it was time to release these songs, and I hope that you will enjoy this music. I’m overwhelmed at the support I’ve had from so many folks in­ volved in the music business, the dj’s, radio stations and my fans. As long as y’all want to listen, I’ll keep bringing you more music. I’ve recorded songs in many genre’s, country, western, gospel, and even a trucking album, and I’m hoping I can continue to bring you more and more of my music for a long time to come. I will also be recording some new songs as soon as I can get in the studio.”

Dawn Anita continues to record today.  Just this last week she completed a recording session in Ft. Worth, Texas where she recorded a new 5 song E.P. to be released as soon as it is produced and mastered.  There is nothing that slows her passion for the talents she has been blessed with.  With her husband of 64 years at her side, Dawn Anita and Jerry keep on, keepin’ on.

In 2017 Dawn Anita was crowned Ms. Senior Oklahoma.  The next year she was awarded the Academy of Western Artists Female Western Artist of the Year.  In 2017 she was also named as Pro Cowboy Country Music Artists Assn. as Top Five Female Vocalist.   Dawn Anita is also a published writer, having written the story of when she and her husband Jerry Plumlee rode all the way from Oklahoma to Nashville Tennessee on horseback to attend the CMA Fanfest.  That book was titled “One More Last Chance”.    The Bio on her website reads like a who’s who in Country Music.

Dawn Anita’s roots are deeply embedded in country music. She grew up in a musical family and has been singing since the age of 7. Her folks would host regular Saturday Night Music Fests, and folks would come from miles around to sing and play music, and she could hardly wait to get her turn to get up and sing. A real cowgirl, she was raised on a ranch in southern Oklahoma, and she and her husband currently live on a ranch near where she lived as a child. She is equally at home on horseback or on the stage singing or reciting her cowboy poetry. She has performed throughout the US, Canada and the Caribbean. Early in her career she spent five years singing with the famed Texas Playboys and has performed with artists like Red Steagall, Hank Thompson, Mel Tillis, Johnny Russell, Johnny Rodriguez, Charley Pride, Willie Nelson, Gene Watson, Joe Diffie and Tanya Tucker. She has received numerous awards during her career for her singing, song writing and poetry, including “Female Vocalist & Entertainer of the Year” at the Oklahoma Opry, and she was named the 2017 Ms Senior Oklahoma of America. She has released several albums over the years, and in November 2017 she released a western album entitled Down on Wildhorse Creek, which was nominated for Album of the Year with the Academy of Western Artists Association and the Pro Cowboy Country Artist Association. In November 2018, she released an album entitled The Country In Me , and it was nominated as Album of the Year with AWA.. In March 2019 she was named by AWA as the 2018 “Western Female Vocalist of the Year.” Her album Saddlin’ Up For God, Country & Cowboys was released in October of 2019, and is still receiving lots of air play in the states and overseas. One of the songs she wrote on the album entitled “Stand Up I’m Talkin’ About Texas” was listed as the No 1 most played song by western DJ’s according to the Fall 2019 edition of Western Way. She also released an EP with her son Jerry Don Plumlee entitled “Raisin’ Hell In Heaven,” and she and Jerry Don have nominated by AWA for Pure Country Duo with AWA, and the album has been nominated as Pure Country Album. In addition four of the songs have been nominated as as Pure Country Song. Dawn Anita was so sad to learn of her nephew Joe Diffie’s death in March of 2020 from Covid. She released an EP of 5 unreleased duets that she and Joe had recorded prior to his signing with EPIC. She felt it is a great legacy and folks all over the world are enjoying listening to these tunes. This EP has also been nominated as Pure Country Album with AWA, and the song “Sweet Dreams Die Hard” has been nominated as Album of the Year. As you listen to Dawn Anita’s  music, you will be enchanted with her pure vocals and her original style. Some songs will bring a tear to your eye, some will make you laugh, and some will set your toes to tappin’, and they all are sure to be pleasing to your ear!

There’s just something in Dawn Anita’s heart that pushes her forward with the talents God gave her, and in my opinion, one of those talents is the passion and drive to accomplish with flair, anything she sets out to do. This lady of Country is by no means through with Country Music, and Country Music is not through with Her.