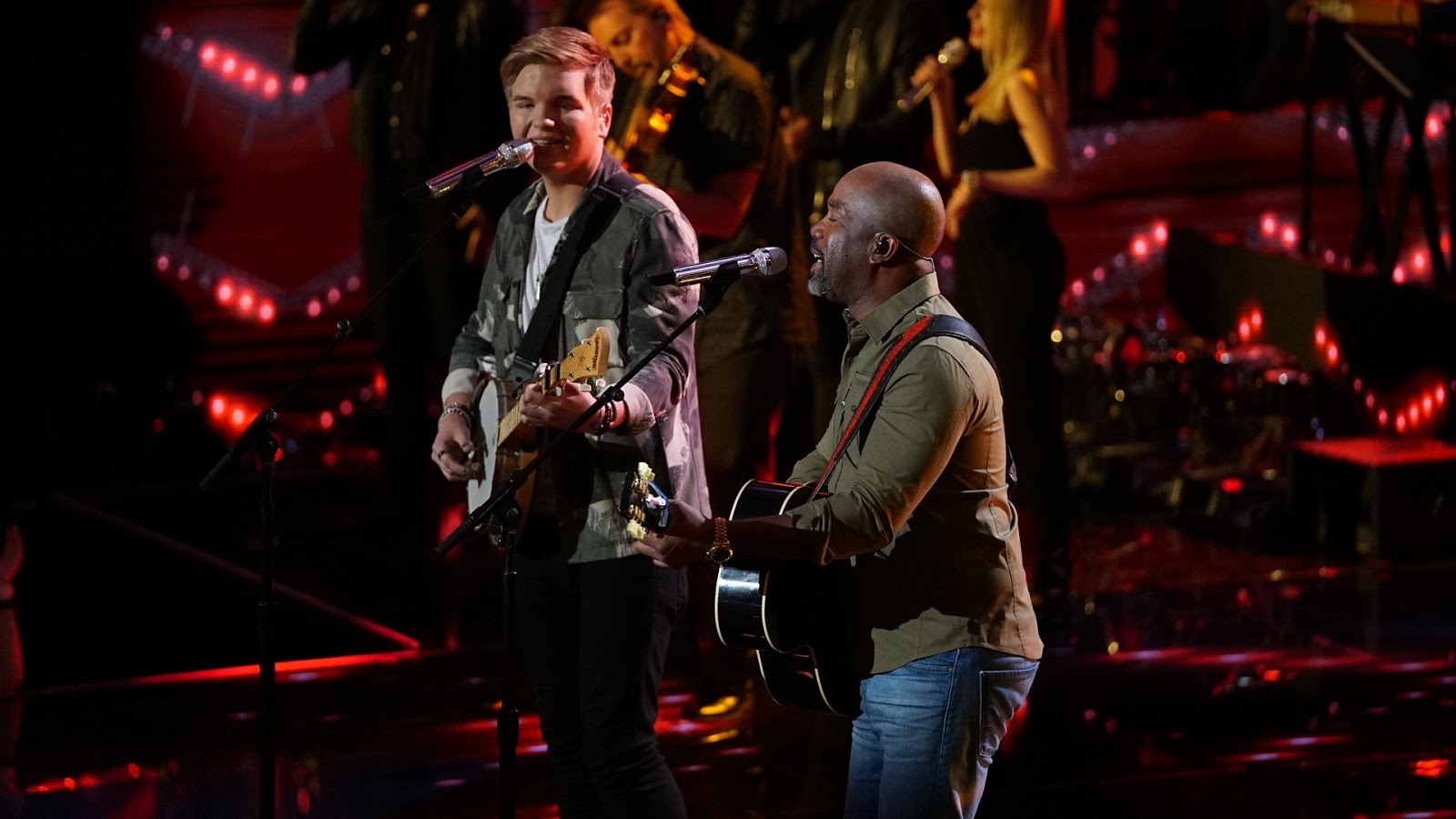 “It’s so inspiring to see how much talent, passion and ambition these
contestants have,” said Rucker. “I loved being a part of Caleb’s
experience on ‘American Idol.’ He’s got that old school voice.“

Rucker, whose current single “For The First Time” is currently in the
Top 3 on the country charts, will return to national television on
Thursday, May 24 at 11:35 p.m. EDT as the musical guest for a special
Fleet Week episode of “The Tonight Show Starring Jimmy Fallon” on NBC.

The man Billboard calls “one of the torch-bearers for the
format” will again bring a selection of his country music hits to fans
nationwide as he graces the “TODAY” plaza stage for the Citi Summer Concert Series on Friday, May 25 starting at 7:00 a.m. EDT.

Rucker will continue his summer of music with the ninth annual “Darius and Friends”
show benefitting St. Jude Children’s Research Hospital at the Ryman
Auditorium in Nashville on Monday, June 4, as well as his co-headlining Summer Plays On Tour with Lady Antebellum, kicking off Thursday, July 19 in Toronto, Ontario.

Rucker first attained multi-Platinum status in the music industry as the
lead singer and rhythm guitarist of GRAMMY award-winning Hootie &
the Blowfish. Since releasing his first country album in 2008, he has
celebrated four summits to the top of the Billboard Country
albums chart and earned a whole new legion of fans. In 2014, Rucker won
his third career GRAMMY award for Best Solo Country Performance for his
4x Platinum selling cover of Old Crow Medicine Show’s “Wagon Wheel,”
off his album, True Believers. Rucker’s first two country albums, Learn To Live and Charleston, SC 1966 produced
five No. 1 singles including “Come Back Song,” “This,” “Alright,” “It
Won’t Be Like This For Long,” and “Don’t Think I Don’t Think About It.”
Southern Style, his fourth studio country album, features his seventh
No. 1 single “Homegrown Honey,” co-written by Rucker, label mate Charles
Kelley of Lady Antebellum, and Nathan Chapman. Rucker’s latest album on
Capitol Records Nashville, When Was The Last Time, featured
the lead single “If I Told You,” his eighth No. 1 on country radio.
The album’s second single, “For The First Time,” is currently Top
3-and-climbing.