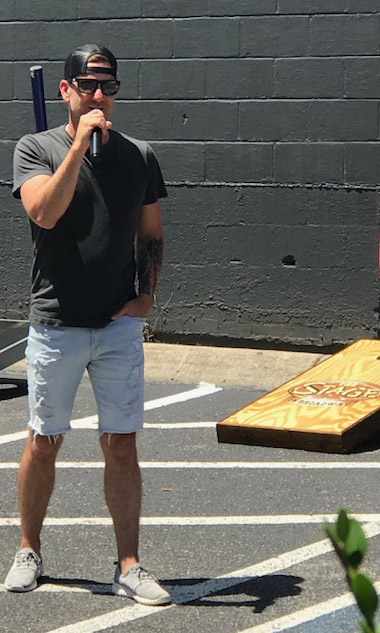 Raises hundreds of thousands of
dollars with celebrity friends

It was Celebrity Cornhole Challenge time in
Nashville on Tuesday, June 5. The celebrities – and hundreds of fans – turned
out at the City Winery to enjoy a warm, pre-CMA-Fest afternoon of fun for a
good cause: to raise aware and funds for Fight Colorectal Cancer (Fight
CRC).  This is a cause very close to my
own heart. My brother Shannon died from colorectal cancer at the age of 39 and
his death could have been prevented simply by a colonoscopy.

In case you are not familiar with cornhole,
it is a game in which small bags filled with dried corn or beans are tossed at
a target consisting of an inclined wooden platform with a hole at one end.  Points are scored when a contestant tosses
his or her corn bag into the hole (3 points) or onto the board (1 point). The
game was said to originate in Germany in the 14th century and was
revived by settlers in Kentucky in the 19th century.

Craig was joined by LOCASH, Walker Hayes,
Brett Kissel, Russell Dickerson, Jerrod Niemann, Brett Young, Lindsay Eli,
Tegan Marie, Morgan Mills, Taylor Phillips, Dee Jay Silver, The Cadillac Three
and other celebrities who tried their cornhole skill (or lack of it) to
entertain the fans who cheered them on.

During a break in the action, I asked
Craig, how did this event come about?

“Six years ago, I wanted an event that
honored my dad,” said Craig.  “He was 36
years old when he died of colon cancer, so I thought, what can I do to honor
him? And to have fun and do something different, you know? A lot of people are
having free concerts, golf tournaments, fishing tournaments.  But no-one is having a cornhole tournament.
So then, I thought it was a pretty cool play on the whole corn hole / colon,
that sort of thing! So that’s how it all started.  Now we’re at year number six and I feel it’s
just getting bigger and better.” 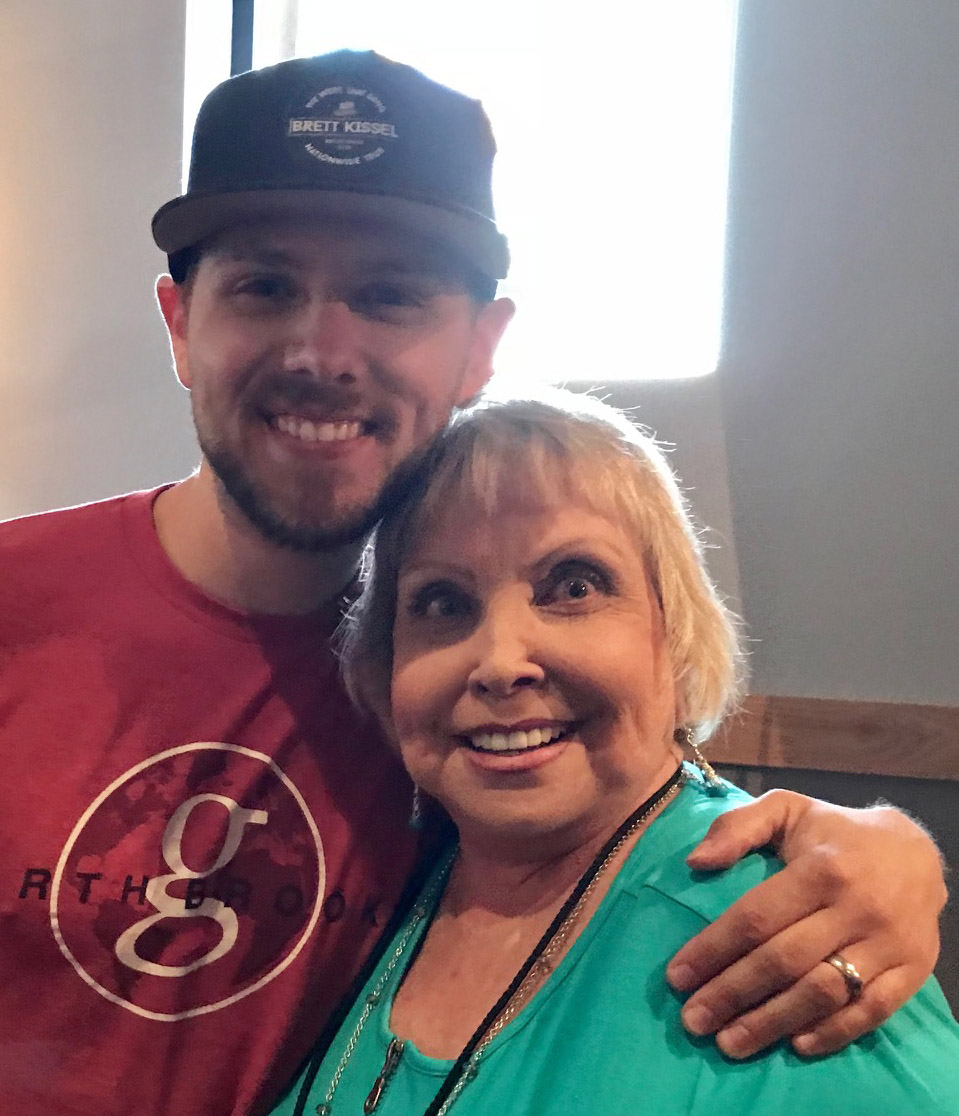 As Brett Kissel took a break to grab a
bottle of cold water, I asked him how it felt when he opened for Garth Brooks,
the dream of every singer and songwriter.

“It was the best thing I’ve ever been able
to do in my career,” he said. “I’ll tell you, every night that I got to step
out on stage to perform and open the show, and then a few times when I got to
be on stage and sing with Garth in front of his crowd, I’m telling you
Preshias, that was exactly what Cloud Nine feels like! I believe that there are
moments that are similar to what heaven could feel like, and that was like a
heavenly moment.”

“And I’ll tell you a Brad Paisley story,”
added Brett, recalling another unforgettable moment.  “My first trip to Nashville was about 2003 or
2004. I went to ASCAP to meet with a gentleman named Ralph Murphy who is a big
advocate for international acts who come to Nashville and are trying to get
their foot in the door. I was just about to turn fourteen years old and after
my three o’clock meeting, he said ‘stick around because at five o’clock Brad
Paisley is coming in and we’re throwing a Number One party for him.’ So Ralph
introduced me to Brad. His Number One song at that time was ‘Mud on the Tire’
and Brad took a picture with me and he gave me an autograph that said ‘To
Brett. I’ll save you a spot on my tour.’ Fast forward ten years, and in 2014,
2015 and 2016, I got to go out on the road with Brad Paisley!”

(Brett’s family has also had to deal with
the effects of cancer, making his appearance at this event a very personal
one.  Knowing that I am a survivor of the
same type of cancer, Brett asked that we have our photo taken together for this
article.) 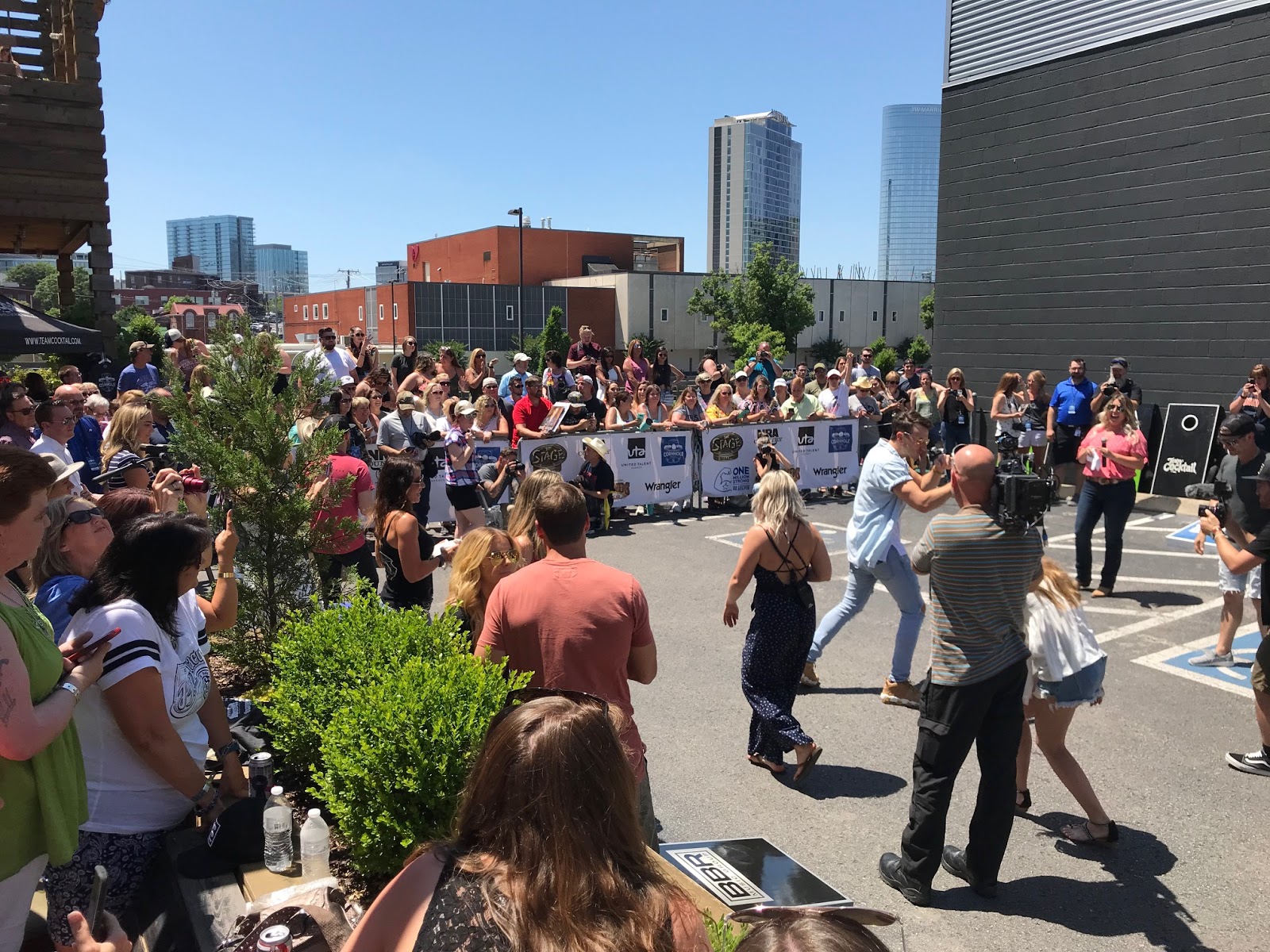 At fourteen years old, Tegan Marie was the
youngest competitor in the Cornhole Challenge. Now signed to Warner Music
Nashville, she has just released her new single, ‘I Know How to Make a Boy Cry’
that she co-wrote with Nathan Chapman. She is scheduled for numerous
appearances during CMA Fest 18.

I asked Tegan how she felt, competing in
the Cornhole Challenge with all these crazy men.

“Craig is one of my dearest friends,” she
said. “I love him so much. I’m just here to get my game on and to help raise
money to fight cancer.”

Craig Campbell’s Cornhole Challenge has
raised more than $300,000 to help fight colorectal cancer, and Tuesday’s event
was set to add even more to the fund the efforts at Fight CRC. Colorectal
cancer is the second-leading cause of cancer death among both men and women.
The organization hopes to increase awareness that early detection through
colonoscopies can save lives.

If you’d like to know who won the Cornhole
Celebrity Challenge, it was… Craig Campbell! But the real winner is Fight CRC,
who receive all the funds raised by this event.

(I can personally attest to that: If my
brother Shannon had undergone a colonoscopy, they could have caught his
colorectal cancer in the very early stages and his life would have been saved.
However, his health insurance would not pay for the procedure due to his young
age.  Colonoscopies save lives! –
Preshias)