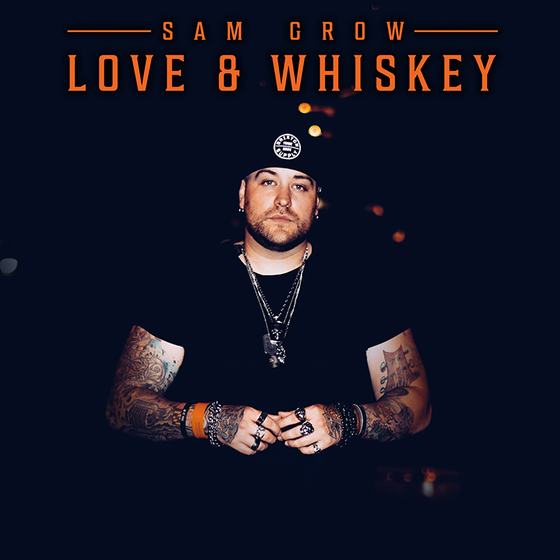 Emerging
country star Sam Grow’s new 12-track studio album, “Love And Whiskey,”
is readying for release on Average Joes Entertainment May 3, 2019.
“Love And Whiskey” was produced by Jacob Rice and represents the best of
modern country. Pre-order the album here and instantly receive the new single, “Nobody’s You.” Fans can sample the new music live on Grow’s 17-City tour commencing April 25 (more dates to be announced).

Grow, named one of Billboard’s “7 Country Acts to Watch in
2019,” is a seasoned songwriter and performer. His strong vocal delivery
and impactful lyrics hook the listener from the very first note. “Love
And Whiskey” is a self-portrait that speaks to listeners as if they had
written this collection of songs themselves.

From the unpredictability of romance on the title track, “Love And
Whiskey,” to the playful “Battle of the South,” and fondly remembered
places on “God Made Small Towns,” to the emotional “Drink About That,”
and heartbreak on “I’m Not Him,” the new album highlights Grow’s insight
as a singer, his ability to convey loneliness, love and laughter. Grow
co-wrote all but three tracks on the album.

Grow’s first two singles, “History,” and “Boots,” have received early praise from industry tastemakers including Billboard Magazine and Music Row Magazine. Music Row Magazine’s,
Robert Oermann, said that Grow is “on board with strong bids for future
stardom,” and that his first single, “History,” has a “wonderfully
strong, expressive delivery,” and “…has hooks-a-plenty.” “History” is
currently spinning on Spotfiy’s “New Boots” playlist.

“On Love And Whiskey I’ve found out who I really am,” Grow insists.
“This record allowed me to take all the things I love about country
music and music in general and put it all together.”

A native of Mechanicsville, Maryland, Grow was named one of Billboard Magazine’s “7
Country Acts To Watch in 2019.” He released his debut self-titled EP in
2014, gaining him chart success at #8 on the iTunes Country Albums
chart. It was followed by the album, “The Blame,” that charted at #5 on
iTunes, #8 on Billboard’s Top Country Albums chart and #2 on Billboard’s Heatseekers albums chart.