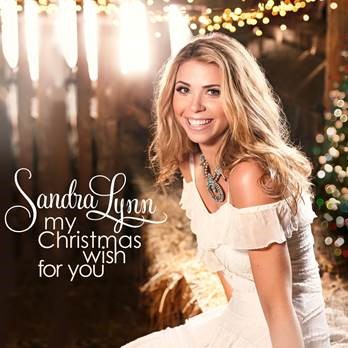 Just
in time for the holiday season, country music up-and-comer, Sandra
Lynn, will be releasing an original Christmas song, “My Christmas Wish
for You” via iTunes, Spotify and all digital and streaming services
on Monday, November 19th. The encouraging and hopeful track
can easily be placed within the cannon of modern holiday classics.
Lynn’s warm vocal backed by the simple instrumental throughout the song
creates an embracing feeling of comfort from the first note.

“I am so thrilled to release my first Christmas song, and honored that
songwriters’, Linda Thompson and Richard Marx entrusted me to bring
their beautiful lyric and melody to life,” said Lynn. “It truly is such a
universal and timeless message that I feel rings true not only during
the holiday season, but throughout the entire year.  I’m incredibly
grateful to producer, Ben Fowler and all of the amazing musicians that
helped bring this track to life, and am so excited for the world to hear
“My Christmas Wish for You” for the very first time this holiday
season,” elaborates Lynn.

Also on Monday, November 19th, Lynn will
celebrate a career milestone when she makes her debut at the historic
Ryman Auditorium in Nashville, TN by performing “My Christmas Wish for You” at the 2018 Christmas 4 Kids live
concert event. The non-profit concert works to provide underprivileged
children in Middle Tennessee with their very own Christmas shopping
spree. The funds generated by the Ryman concert, are used to give over
400 children from 29 different schools, a day-long shopping excursion.

“It is not only a dream come true to get to perform at the ‘Mother
Church’ of Country music, sharing the stage with several other artists I
look up to, but also such a joy to be able to support an amazing cause
that will help so many children throughout middle Tennessee this
Christmas.”

Since launching herself as an independent artist in 2014, singer and
songwriter, Sandra Lynn, has established herself as one of country
music’s sweetest rising voices. Lynn began singing at the age of seven
and immediately gravitated toward such iconic artists as Trisha Yearwood
and Dixie Chicks, as well as Shania Twain and Faith Hill. Since then,
Lynn has spent much of her time in Music City with some of Nashville’s
hottest songwriters and hit-makers, including Rascal Flatts’ Jay
DeMarcus, Dave Brainard, Ross Copperman (who produced Lynn’s single,
“Afterparty,” which was picked up by SiriusXM’s The Highway, along with
her song “Bar-Hoppin”), Jeremy Spillman, Hall of Famer members Gary Burr
and Tom Schuyler, Tia Sillers, Victoria Banks, among many others. Lynn
has also made a name for herself on the live circuit, opening for Brad
Paisley, Kenny Chesney, Cole Swindell, Kenny Rogers, Jana Kramer, and
Josh Thompson, as well as performing during CMA Fest at Milwaukee’s
Summerfest, and playing local Nashville venues, including 3rd and Lindsley, The Wildhorse Saloon, and The Listening Room. In 2018, Lynn released her deeply emotional EP, FIGHT, produced
and engineered by Grammy-winner, Ben Fowler which kicked off a
three-part series of EPs documenting the push and pull of a couple
trying to save their relationship.