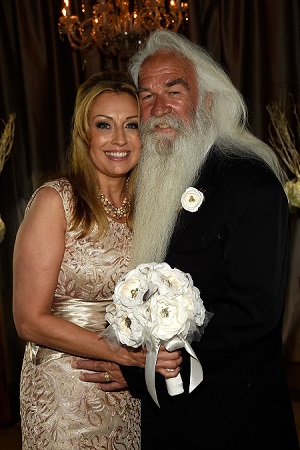 NASHVILLE,
Tenn. (August 31, 2015) – The Oak Ridge Boys’ William Lee Golden is no
longer a single man. The Country Music Hall of Fame inductee and country
music legend known for his deep baritone voice married Simone Staley in
a private ceremony among a small group of close family and friends in
Nashville, Saturday, August 29. Celebrities in attendance of course
included Golden’s confidantes, Duane Allen, Richard Sterban and Joe
Bonsall of The Oak Ridge Boys, among others. 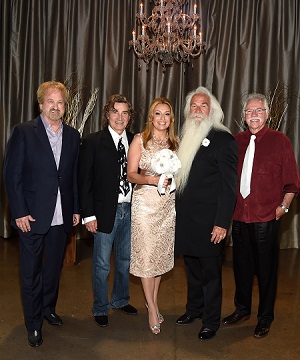 The two long-time friends’ love story, captured by journalist Matt Bjorke on WilliamLeeGolden.com, is straight out of a fairytale, having re-kindled their friendship after 27 years.

At the age of 18, Staley purchased the Oak Ridge Boys’ Together album
and was instantly drawn to the picture of Golden on the front of the
album cover. She somehow felt as if she would meet him someday, and by
the fall of that same year, she was sitting in the front row at her
first Oak Ridge Boys concert. Golden threw a scarf her way, and she
happened to catch it, as if the two were destined from day one.

In October of 1980, the two finally met at a show at Knott’s Berry
Farm, and the attraction was instant. They would spend time together
over the next couple of years, however, their lives went in two
different directions after a show in 1982, and they lost touch.

Fast forward to May of 2009, when they both had recently lost their
mothers, they reignited their friendship and bonded over their mutual
love of art and painting. Simone painted a portrait of Golden, which she
gave to him back in the 80s, that he held on to for all of those years —
and even pulled from the destruction after his home was destroyed by a
tornado. It was the memory of her that he saw when he looked at it.

“Although it was a portrait of me, I could see her face every time I saw that painting,” said Golden.

“I had always wondered if he held onto that painting,” said Staley.
“It was probably silly to do so, but I just felt very strongly about it
after pouring my heart and soul into it.”

By summer of 2013, Golden invited Simone to come to Tennessee and go
to Alabama and Florida with him to visit family and friends. The time
spent traveling together allowed them to get to know one another even
better, and it was that trip that solidified what they already knew –
that they couldn’t be without each other.”

The two plan to reside in their home they found together in 2013 in
Middle Tennessee with their loving pets — happily ever after.

“It’s been the most beautiful experience, together,” Golden said.