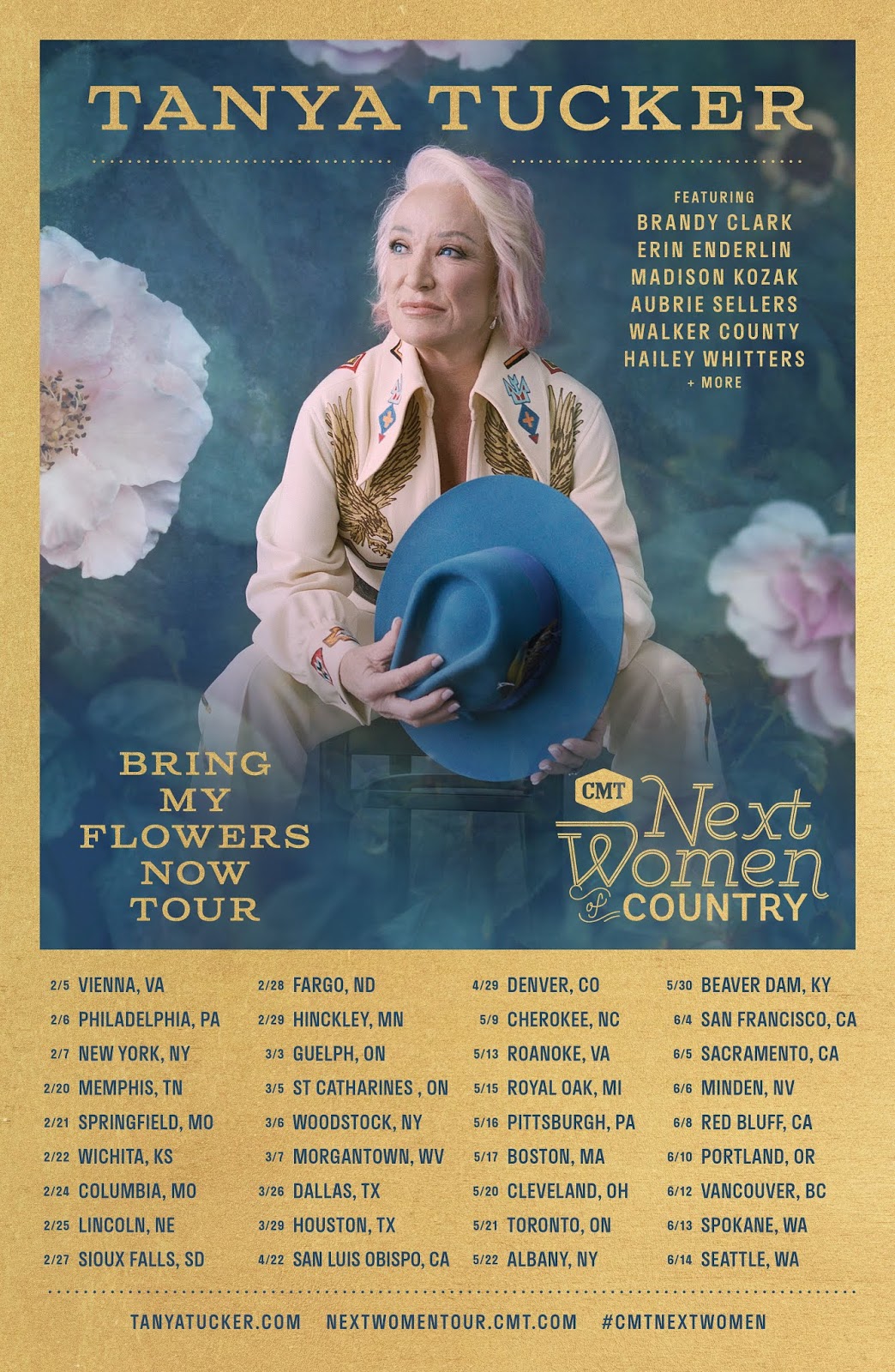 Today, CMT-awarded and GRAMMY®-nominated music icon and original female outlaw Tanya Tucker, whose critically acclaimed album While I’m Livin’landed at No. 1 on Rolling Stone’s 40 Best Country and Americana Albums of 2019, revealed the 2020 tour dates for the “CMT Next Women of Country: Bring My Flowers Now Tour.”
Kicking off on February 5, the CMT tour will make stops in such major
cities as Boston, Dallas, Houston, New York, Ontario, Vancouver and
more. Fans can sign up for early access to presale tickets on TanyaTucker.com. Tickets for the majority of the dates go on-sale beginning this Friday, December 13 at 10:00 am local at CMT.com and TanyaTucker.com.

Joining Tucker on tour will be a variety of CMT’s Next Women of Country alum, including Aubrie Sellers (2017), Brandy Clark (2013), Erin Enderlin (2017), Hailey Whitters (2020), Madison Kozak (2020) and Walker County
(2020), as well as Shooter Jennings, who will appear at various stops
along the tour. Additional dates and openers to be revealed at a later
date.

“We are honored to have the original woman of country, THE Tanya Tucker,
headline our biggest Spring tour to date!” said Leslie Fram, Senior
Vice President, Music Strategy & Talent. “We’re also thrilled to
announce that some of the incredibly talented ladies from our Next Women
of Country franchise will be joining Tanya on tour.”

Born in Seminole, Texas, Tanya Tucker had her first country hit, the
classic “Delta Dawn,” at the age of 13 in 1972. Since that auspicious
beginning, she has become one of the most admired and influential
artists in country music history, amassing 23 Top 40 albums and a
stellar string of 56 Top 40 singles, ten of which reached the No. 1 spot
on the Billboard country charts. Tucker’s indelible songs include some
of country music’s biggest hits such as the aforementioned “Delta Dawn,”
“Soon,” “Two Sparrows in a Hurricane,” “It’s a Little Too Late,”
“Trouble,” “Texas (When I Die),” “If It Don’t Come Easy” and “Strong
Enough To Bend.” Tucker is also the recipient of numerous awards,
including two CMAs, two ACMs and three CMT awards. Recently, Tucker
received four GRAMMY® Award nominations including Song Of The Year:
“Bring My Flowers Now,” Best Country Album: While I’m Livin’, Best
Country Solo Performance: “Bring My Flowers Now,” and Best Country Song:
“Bring My Flowers Now.” The four nominations lead all 2020 Country
GRAMMY® nominees.

A staunch advocate for country music’s female artists, CMT launched its “Next Women of Country”
campaign in 2013 in an effort to support and expose developing female
talent, both signed and unsigned, in a male-dominated format. The
campaign showcases emerging female artists across all CMT screens
throughout the year, and in the six years since its launch, CMT has
expanded the initiative to include five CMT NEXT WOMEN OF COUNTRY Tours,
anchored by superstar acts including Jennifer Nettles, Martina McBride
and Sara Evans; a CMT.com digital series titled NEXT WOMEN OF COUNTRY
LIVE; and more. Notable alumnae of the franchise who have achieved both
commercial and critical acclaim, include Kacey Musgraves, Kelsea
Ballerini, Maren Morris, Lauren Alaina, RaeLynn and Lindsay Ell. The
2020 tour is sponsored for the second consecutive year by Burlington
Coat Factory.