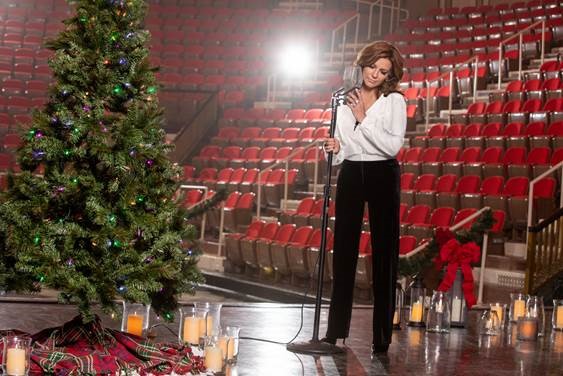 This holiday season, country music icon and lifestyle influencer,
Martina McBride, has been busy helping spread a little Christmas magic
to her fans. Whether it be by setting the mood for your annual holiday
party with her recently released jazz influenced and symphony orchestra
backed album, It’s The Holiday Season, or by helping craft perfect recipes for your family and friends with her new cookbook, Martina’s Kitchen Mix: My Recipe Playlist for Real Life and current show on Food Network, “Martina’s Table” (airing Sundays at 12pm ET/PT), McBride has all your holiday entertaining needs covered!

Most recently, McBride has been on the road with her The Joy of Christmas Tour 2018, which just had a stellar sold-out three night run
at Nashville’s own Schermerhorn Symphony over the weekend. Each stop on
the tour has incorporated the amazing talents of local orchestras as
McBride delivers her jazzy take on everyone’s favorite holiday standards
and her classic hits.

McBride also treated viewers of the 92nd Annual Macy’s Thanksgiving Day Parade to her rendition of “Most Wonderful Time of Year” atop the Balsam Hill float. She was also on hand at this year’s Rockefeller Center Christmas Tree Lighting
event where she performed “Winter Wonderland” standing in front of the
New York spectacle that draws thousands of visitors to the city from
across the globe.

Up next, fans can catch McBride on “Live! with Kelly and Ryan” on Tuesday, December 11th
where she will be in the kitchen showing the hosts a few of her
favorite recipes that are perfect for holiday entertaining. She will
return to the show on Monday, December 24th for their special Christmas show where she will perform.

Martina McBride is a multiple Grammy©-nominated country singer, whose
vocals have kept her at the top of the charts garnering six #1 hits and
20 top 10 singles. Selling more than 18 million albums to date, she has
earned 14 Gold, nine Platinum, three Double Platinum and two Triple
Platinum certifications. In addition, she has been honored with more
than 15 major music awards, including four wins from the Country Music
Association and three Academy of Country Music Awards for Female
Vocalist of the Year. She recently released a new Christmas album, It’s The Holiday Season,
that features her favorite Christmas standards, all with the backing of
a symphony. Martina also hit the road for The Joy of Christmas 2018
tour where she enlisted the talents of local orchestras to back her
jazzy renditions of everyone’s holiday favorites. Apart from music,
Martina remains active as a lifestyle influencer. She recently released
her latest cookbook, Martina’s Kitchen Mix: My Recipe Playlist for Real Life and also premiered her new show, Martina’s Table,
on Food Network. The lifestyle program will offer viewers a glimpse
into how she entertains at home, sharing her recipes and cooking tips
that make her the queen of the kitchen. Martina is also passionate about
her charity initiative Team Music Is Love, which has been responsible
for many successful fundraising and volunteer projects helping causes
such as hunger relief, cancer research, combating domestic violence and
helping children in need.