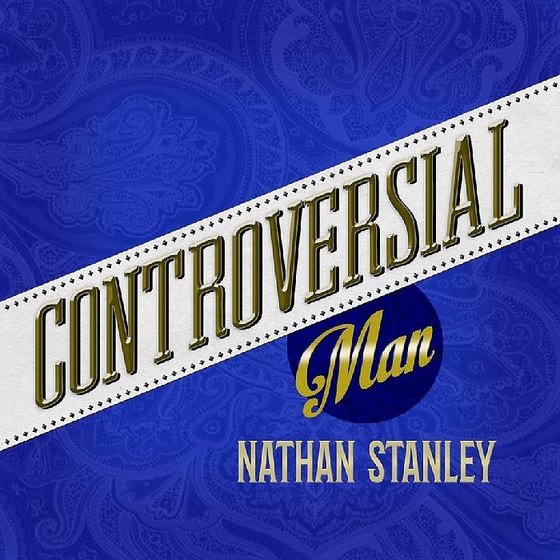 (September 12, 2017) Nashville, Tenn.— The highly-anticipated follow-up album to Nathan Stanley’s award-winning EVERY MILE album, CONTROVERSIAL MAN, is a diverse collection of songs old and new. The 12-track country-roots project (released September 6 and available via iTunes or by calling 615-491-2074), includes both original offerings as well as renditions of Stanley’s favorite Country classics. (Radio programmers can download the album at AirPlay Direct at www.airplaydirect.com/controversialman.)

CONTROVERSIAL MAN celebrates
Nathan Stanley’s biggest influences, both personally and
professionally. To honor his Lord and savior, Jesus Christ, the 2014
Dove award-winning artist includes several Gospel songs, including his
original current single, “Why Do We Walk So Blind” (currently going for adds–available at Air-Play Direct to Christian Country radio via digital download). Stanley also pays tribute to his legendary grandfather, Dr. Ralph Stanley, with the notable track “He’ll Always be Papaw to Me.” His duet with Patty Loveless, “All I Have to Offer You is Me,” is
a traditional stand out. Stanley rounds out the album by performing
signature songs of a few artists he most admired, including Gene Watson‘s “Before the Hammers Could Ring,” Elvis Presley’s “I Can’t Help Falling in Love with You,” George Jones’ “Choices,” and most poignant, Glen Campbell’s “Gentle on My Mind.”

“I worked on this album for a long time,” says Stanley. “I wanted it to honor those who have sort of guided my steps,” he adds. “The
fabric of who I am as an artist, and as a person, is like a
one-of-a-kind quilt. It’s been stitched together and patterned after
those I admire most: God, the Father; my grandfather, Dr. Ralph Stanley;
Glen Campbell; Elvis Presley; Gene Watson; and George Jones. They’ve
all been a definite part of my personal influence and musical tapestry.”

CONTROVERSIAL MAN was
not an easy project for Stanley to deliver. Last year was particularly
rough as he struggled with the pain and loss of his “Papaw,” the
legendary Dr. Ralph Stanley.
For two decades, Nathan had worked alongside his beloved grandfather.
Still traveling and doing shows until a few months before his passing,
Nathan was the last lead singer and business manager for the icon and
The Clinch Mountain Boys when Dr. Stanley fell ill, passing away in June
of 2016, just a few months later.

“I’ve thought a lot about my life–who I am and the people in it,” says Stanley. “I now know my heart and I’m ready to sing again,” he adds. “I’m
excited about this album and I feel that CONTROVERSIAL MAN is the best
work I have done so far. I’m so proud of how it turned out.”

Despite being born into musical royalty, Nathan Stanley (sometimes referred to as the “Prince of Bluegrass”)
has never attempted to be a carbon-copy of his grandfather. When it
came to his own music, Nathan has always heeded the early-career advice
he gave him–“don’t be afraid to carve your own path.”

With nine solo albums to his credit, Nathan has done just that. In 2011, his single “White Dove” with Vince Gill landed at #1 on the Inspirational Country Music (ICM) Chart, and his album, MY KIND OF COUNTRY, was named “Classic Country Album of the Year” by the National Traditional Country Music Association. In 2014, Nathan signed a recording deal with Willow Creek Records (Nashville) and released his album, EVERY MILE, garnering a coveted GMA Dove Award for “Bluegrass Album of the Year.” In 2016, Nathan was named “ICM Inspirational Bluegrass Artist of the Year.”

Filled
with conviction, emotion, and traces of old ghosts from days gone by,
Nathan stays true to his country, bluegrass, and gospel roots…and his
faith is no secret to anybody. Every time he steps out on a stage he
lets his audiences know that his blessings and talent is a gift from
God.

1. Gentle on My Mind

2. He’ll Always Be Papaw to Me

7. I Will Not Compromise

8. I Can’t Help Falling in Love

11. Before the Hammers Could Ring

CONTROVERSIAL MAN is available via iTunes or by calling 615-491-2074. Radio programmers can download the full album at www.airplaydirect.com/controversialman.