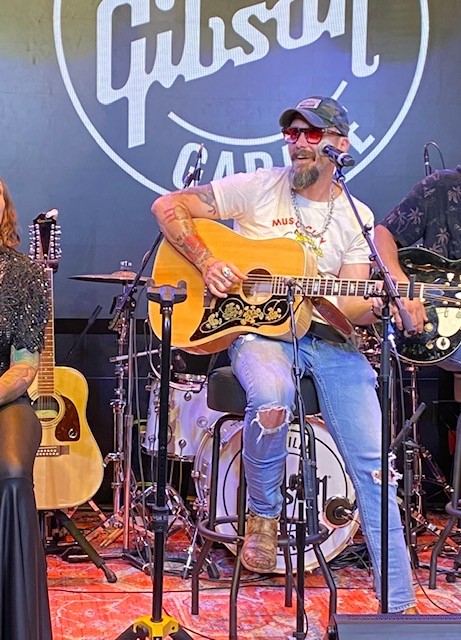 I had an incredible CMA Fest week.  I had my good friend Judy Mayes join me for some super media fun and Catrina Engelby helping us with photos!

The CMA Music Festival came in like a “Hurricane” (no pun intended) with 2022 CMA Entertainer of the Year Luke Combs. Luke invited 9,000 of his closest friends and fans to celebrate his number one songs (this makes thirteen in a row) and kicked it off Wednesday night at BMI Nashville’s parking lot. He brought his friends and co-writers to celebrate and perform with him. His special guests were; Drew Parker, Randy Montana, James McNair, Dan Isbell, Tyler Reeve, Rob Williford, Jonathan Singleton, Hailey Whitters, Thomas Archer, Wyatt Durrette, Ray Fulcher and Shane Minor.

Speaking of celebrations…Happy one year anniversary to the Gibson Garage in downtown Nashville. They had some amazing special guests including my kid Elvie Shane (“My Boy”), Ernest, Callista Clark, Danielle Bradbury, Tiera, Eric Pasley performing for the fans. Darius Rucker made a surprise visit, presenting a special donation for the Gibson Gives, the company’s philanthropic charity. He did a bang-up job as always. They also had special events, prizes, giveaways, and of course country music stars. Love it when the Gibson’s execs come out to visit and mingle.

If you were close to downtown, you could not keep from hearing the great music coming from the city center. All the stages were free (Except Nissan Stadium) so you had the cream of the crop, the newcomers and our favorite ‘go-to’ artists. Every song I heard brought back a memory to me and I just became a fan of the indie artists coming out. #RaleighKeegan is one of my top favorites (and not because he is a Kentucky basketball fan!) He really does have the good looks of Johnny Cash and ELVIS!

Another one to look out for is American Idol alum Alex Miller. As a matter of fact, country superstar and Idol judge Luke Bryan said to Alex, “Boy, you can sing … thank you Jesus!” He is a Kentucky boy, what can I say? Seriously check him out at www.alexmillercountry.com. Please, please download his amazing single “Through With You.” He co-wrote it with my good friend Jerry Salley. TRUST ME ON THIS ONE.

Next up is another Idol alumni and winner of Season 19.  They sure can pick talent. Chayce Beckham performed all over CMA Fest. He does have the female fans! Check out “Tell Me Twice” and you will hear it! #JordanFletcher is one of Sirius XM’s 2021 Highway Finds and he released a new song called “Death and Taxes” on June 10. The song follows his debut EP titled True Stories via Triple Tigers and produced by Dave Cobb.

#IanFlanigan has toured his whiskey-soaked voice and evocative lyrics across America. In 2020, Flanigan was a celebrated finalist on NBC’s The Voice, finishing third as the representative from Team Blake. Flanigan has, since then, continued to tour as direct support to Trace Adkins and Chris Janson. He has released his debut single, “Grow Up” featuring Blake Shelton with 1.2 million streams and counting.

Here come the girls!  I got to catch Caitlyn Smith at the Listening Room in March – so awesome. She was part of the ‘who’s who’ shows for this year’s Tin Pan South celebration. Caitlyn also just wrapped her 14-date headlining run across the U.S. and spent the last year opening for George Strait, Reba, Little Big Town and Old Dominion. She also self-produced and just released a new 7-song project, titled High, (Monument Records).

Hailey Whitters is the co-writer of her single “The Neon.” It is one of my favorite songs right now. She opened up for Luke Combs in celebration of songwriters at BMI’s parking lot, as noted above. Big Loud Nashville drops her single “Everything She Ain’t” to radio on June 27. BTW the lyrics are so dang clever!

Hope you caught artist-songwriter #LilyRose (Big Loud Records/Back Blocks Music/Republic Records) during CMA Fest. Rose has released “Stronger Than I Am.” The seven-track album has her raw talent and R & B weaving through it like stardom weaving it through her music path. Thank you TikTok! Check out “Villain” and you’ll see I speak the truth… Just sayin’.

Another TikTok story of yellow brick road is #PriscillaBlock. Her honest approach to women on her song titled “Thick Thighs“ paved the way for her song “Just About Over You” to take her to the big show and get her first number one at radio. She is on the road opening up for her music heroes.

Platinum-selling, award-winning group LANCO made a huge hit this year. They definitely love the stage. “Low Class Lovers” is their current single with some great lyrics (sample: “She said you’re pretty cool for a white trash guy / As she puts her best lipstick on”) and the official video is out too.  You can watch it here: https://www.youtube.com/watch?v=96CkFwe3eUI.

I am so happy I got to see two of my favs:  I met Mark Wills in 1996 at the Longhorn and he went on to become the 218th member of the Grand Ole Opry on January 11, 2019. The other one is Darryl Worley. Once again, I met Darryl at the Longhorn in (I think!) 1998.  He would drink coffee and we would talk about how we couldn’t wait to see him on tour. He also wrote one of my favorite patriotic songs “Have You Forgotten.”

Two of my highlights was getting to see my former ‘music kid’ Elvie Shane who showed what he was made of at the Gibson Stage! Then we were headed to the media room and we ran into one of the music kids that I met when she first moved to town to chase her dreams. I met Lainey Wilson when she was around seventeen or eighteen. She can tell you some “Things a Man Oughta Know” (the title of her breakout No. 1 single). I know the sacrifices these two artist-songwriters have made. I wish they gave awards just for that!!!

We got to catch Love and Theft at their show on the Dr. Pepper Amp Stage.  Of course, they sounded pumped and happy to be back. You could see it in their “Angel Eyes”!  Catch their cool new lyric video on YouTube for “Accidentally on Purpose.”

Some of the other artists I hope you caught at the CMA Fest: Chapel Heart (LOVE THEM!) Cameron Marlowe, After Midtown, Diamond Dixie, Clayton Anderson, Dustin Collins, Boomtown Saints, Allie Colleen and Dallas Remington, just to name a few.

So many incredible entertainers were thrilling the fans on the free Riverfront, Amp, Chevy Vibes and Reverb Stages! Fans who only went to the Stadium shows missed out on seeing and hearing some of the lesser-known artists, many of them rising stars who will be the stadium headliners at future CMA Fests.

Now (because I couldn’t be everywhere!) here is a roundup of the amazing CMA Fest shows at Nissan Stadium by Judy Mayes.

Tens of thousands of country music fans from all 50 states and thirty-nine foreign countries descended on Nashville for the 2022 CMA Fest which returned after a two-year hiatus.  Many had held onto their tickets from 2019 and were ready for the four-day run of music from the small stages to the large nightly shows at Nissan Stadium.  Country Music Stars thanked the fans for returning back to Music City.  Nashville weather was sunny and hot all week, but fans didn’t care, the just wanted to hear great live Country Music!

The Live shows at Nissan Stadium featured top Country superstar lineups every night. CMA Fest was being taped for an ABC-TV special to air August 3.  Fans got to see how a network special is taped as Dierks Bentley and Elle King did all their intros and outtakes on Thursday night.  It was packed with superstar performances by Darius Rucker, Jason Aldean, Keith Urban and Zac Brown Band.  A special ‘90s Country segment starred Shenandoah which was a highlight for many fans.

Friday night belonged to the women of Country Music.  Wynonna Judd came out to sing “Why Not Me,” with Carly Pearce.  Wynonna still has some of the best vocal pipes in the business!   Lainey Wilson, who deserves to be called the hardest-working artist of CMA Fest, gave a stunning vocal performance with Cole Swindell.  Deana Carter, who’s celebrating 25 years of her hit, “Strawberry Wine,” had the crowd on their feet.  Kelsea Ballerina and Gabby Barret showed the new breed of Country Music in their vocal styles.  Kane Brown and Thomas Rhett proved they can provide fun entertainment for any crowd.

Saturday night featured the powerhouse vocals of the “Lukes.”  Luke Combs and Luke Bryan belted out hit after hit for the crowd.  Randy Houser proved traditional Country Music is still loved by the fans.  Brothers Osborne rocked out the crowd with their hard-hitting guitar duos.  Carrie Underwood closed out the night with her rhinestone boots and rhinestone denim shorts.  She commands the stage with her high vocal range like no other singer.

The end of CMA Music Fest on Sunday featured a high energy wrap-up party at Nissan Stadium!  Old Dominion was a fill-in for Alan Jackson who was unable to appear.  They thanked all the fans for coming long distances and being there to support them during the hard times of the last two years.  They played a version of “Chattahoochee,” that had the crowd up and dancing.  Parker McCollum, took the big stage for the first time and wowed the crowd with his Texas charm.  Sara Evans had her whole family helping her in the band to take us back to the ‘90s.  Elle King brough out Ashley McBride to sing with her on “Ex’s and Oh’s.” It was electric!  Lady A brought the fun summertime songs to get the crowd all pumped up.  Breland joined them to sing on “Need You Now.”  Dustin Lynch and Mackenzie Porter got the crowd on their feet with their five-week number one song, “Thinking Bout You.”  The highlight of the night was when Dierks Bentley brought out Billy Ray Cyrus to sing with him on “Achy Breaky Heart.”  Billy Ray had always taken the time to meet and greet fans during the ‘90s at Fan Fair.  An interesting side note: Dierks Bentley was a former intern at the Country Music Association.  It was a great career moment for him to be closing out CMA Fest 2022!

CMA Fest came back roaring this week and everyone will be looking forward to next year! The 2023 CMA Fest will take place Thursday, June 8 through Sunday, June 11, 2023 and marks the festival’s 50th anniversary. Ticket info at https://cmafest.com.

Preshias Harris is a music journalist and music career development consultant with the emphasis on new and aspiring artists and songwriters. Her book, ‘The College of Songology 101: The Singer/Songwriter’s Need to Know Reference Handbook’ is available at   www.collegeofsongology.com   Follow her blog at  www.nashvillemusicline.com

Loretta Lynn – A legend passed away