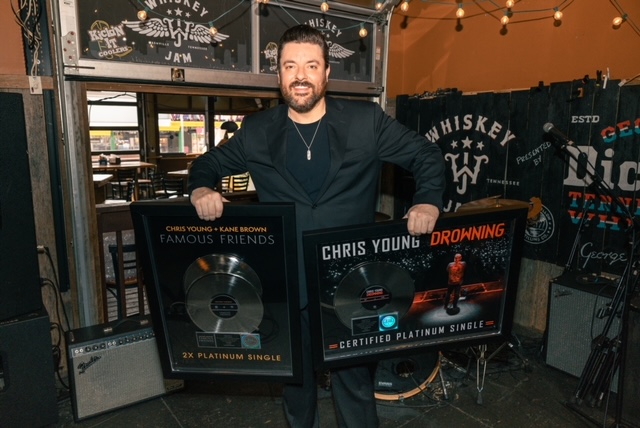 Chris Young joined friends and music industry colleagues to celebrate the success of his most recent hit.  However, this wasn’t actually a No. 1 party: the event, held on Thursday, August 4 at Winners Bar in Nashville was held to recognize another achievement.  “Famous Friends” – Young’s duet with Kane Brown – had achieved 2X Platinum status from The Recording Industry Association of America (RIAA).

At the party, Young was joined by his co-writers of “Famous Friends,” Cary Barlowe and Cory Crowder, all of whom received plaques acknowledging the song’s achievement of Double Platinum. (Kane Brown was unable to attend the event.)

On a personal note, I can remember the month when “Famous Friends” finally climbed to No. 1 on the Billboard Country Airplay charts. I was hearing the song literally everywhere I went and SiriusXM kept it in heavy rotation.

Among the guests at the party was Mitchell Tenpenny. Chris Young’s follow-up single to “Famous Friends” is “At the End of a Bar,” his duet with Tenpenny.

The program got under way as Ken Robold, Executive Vice President and Chief Operating Officer of Sony Music Nashville, welcomed all the guests. In addition to the presentation of the award for the 2X Platinum “Famous Friends,” Robold had a surprise for Young. He presented Young with an RIAA Platinum plaque for his previous single, “Drowning,” a deeply personal song for Young who co-wrote it with Crowder and Josh Hoge.

During his remarks, Young made sure everyone in the room knew how special they were to him and to the music. He recalled that the song was written during the uncertainty surrounding Covid and they had no idea if the song would even have a chance of success.

“We were all sitting there going, ‘What are we going to do? How’s this going to work out?’” he recalled, adding that despite the challenges presented by the pandemic and lockdowns, “I’ve been lucky enough to have one of the biggest songs that I’ve ever done during that period of time.  But [today] we’re getting alongside everyone from my record label, from Sony, so I’m incredibly lucky to have people in my corner and yet these [events] are fun because we get to hang ‘wall art’ and I love that part, but it doesn’t happen without every single person in this room, so, I love you guys, I love this song, I love everything that’s happened in my life.  I can’t take all the credit for it because I’ve just got great people helping me do that.”

As Young emphasized, the event was a testament to the teamwork and perseverance of everyone involved in the Platinum-selling success of both “Famous Friends” and “Drowning.”

About Chris Young: Multi-platinum RCA Records Nashville global entertainer Chris Young has accumulated an impressive list of accomplishments, including membership in the iconic Grand Ole Opry, 5 Billion on-demand streams, 13 Million singles sold, 12 career No. 1 singles, 24 R.I.A.A. Gold/Platinum/Multi-Platinum certified projects and numerous ACM, AMA, CMA and Grammy nominations, as well as wins for Performance of the Year and Collaborative Video of the Year at the CMT Music Awards. These accomplishments and more landed him in the Top 20 of Billboard’s top country artists of the decade.