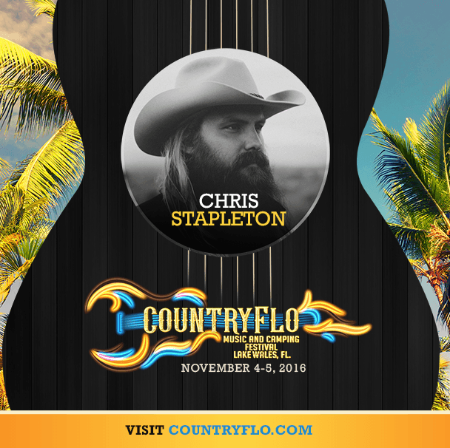 The festival is committed to their mission of celebrating the biggest
names in the genre while embracing tomorrow’s stars. Additional
performers include Thomas Rhett, Chris Janson, A Thousand
Horses, Old Dominion, Joe Nichols, The Railers, Randy Houser, Margo
Price & Country’s 12 year-old viral sensation, Tegan Marie.  CountryFlo has teamed up with artist and superstar songwriter and producer Dallas Davidson who will also perform at the event.

“It
is rare that a talent like Chris Stapleton comes along in this
business. As many of our artists do, Chris, too, has an impressive list
of awards and accolades, especially as of late. There might not be a
more accomplished artist over the past 2 years in country music. His
voice and style is unique but traditional. When asked to describe Chris
Stapleton’s music, the word that comes to mind above all others
is: timeless. Our team is extremely excited to have an artist the
caliber of Chris Stapleton as one of our headliners. His fans are so
engaging because the connection truly lies in his music and the message
he delivers. He’s genuine and stays true to himself, and I think country
music fans really respect that.”
-Tristan Farrell, Project Manager
Tickets are available NOW HERE

ABOUT CHRIS STAPLETON: Chris Stapleton boldly introduced himself to the public at-large in 2015 with the release of his breakthrough debut album, Traveller. Released in May on Mercury Records Nashville, Traveller initially debuted at No. 2 on the Billboard Country
Albums chart with more than 27,000 albums sold, making it one of the
best-selling first weeks by a debut country artist in 2015. It’s also
currently the top selling country album of 2016 and second best across
all genres (only surpassed by Adele). Moreover, the album continues to
receive extensive critical acclaim and has landed Stapleton bookings
on multiple national TV shows including recent appearances on Saturday
Night Live and CBS News Sunday Morning. Following a historic turn on the
CMA Awards—where Stapleton became the first artist to win Album of the
Year, Male Vocalist of the Year and New Artist of the Year at the same
awards—Traveller became the first album to re-enter the Billboard 200 all-genre album chart at No. 1, where it stayed for two straight weeks.

The breakthrough success continued earlier this year at the 58th Annual
Grammy Awards, where Stapleton took home two awards for Best Country
Album and Best Country Solo Performance (“Traveller”). Most recently,
Stapleton won six awards at the 51st Annual ACM Awards—Album of the Year
(for Traveller as both artist and producer), Song of the Year
(for “Nobody To Blame” as both artist and songwriter), Male Vocalist of
the Year and New Male Vocalist of the Year. With the six wins, Stapleton
ties the record for most ACM Awards won in a single year (only Garth
Brooks and Faith Hill have previously won six in the same year).

Co-produced with Dave Cobb, Traveller is comprised
of songs written throughout Stapleton’s 15-year career and evokes his
childhood when country, blues, rock and R&B swirled together to
create a distinctive sound that still resonates with modern fans.