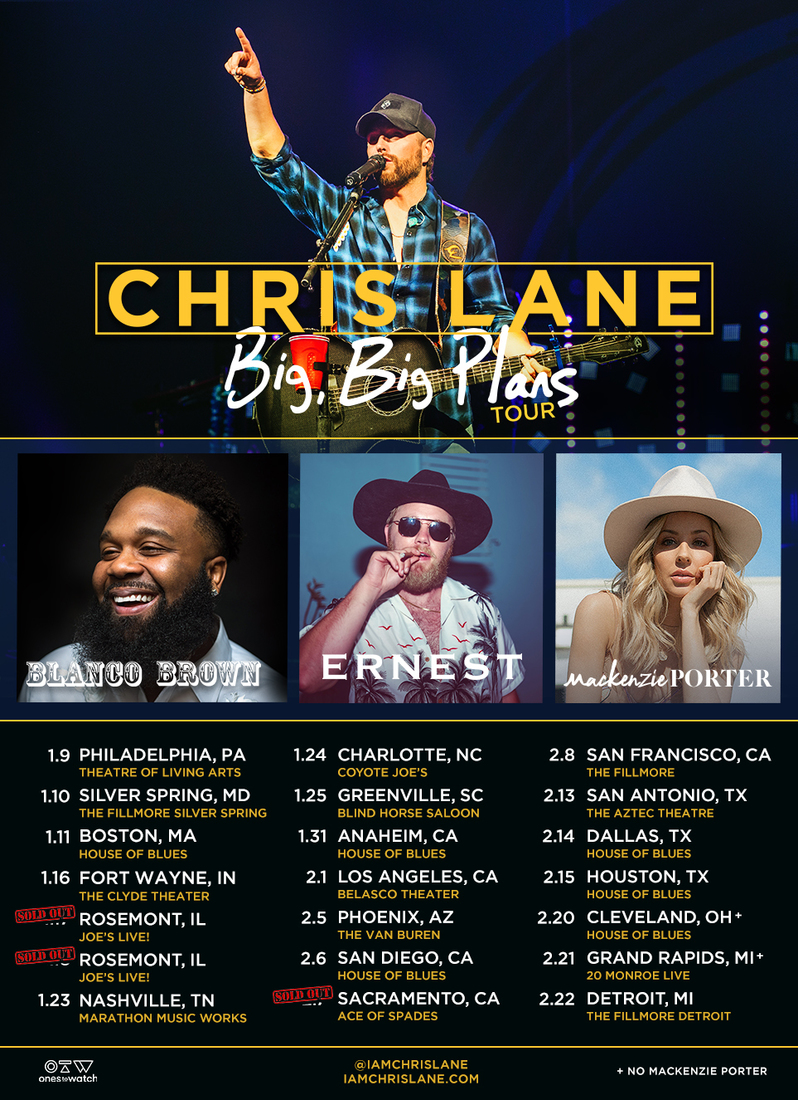 Joining the BIG, BIG PLANS TOUR in January for Lane’s coast-to-coast
run, Porter will serve as an additional special guest alongside Blanco
Brown and ERNEST. She’ll add another dimension to a tour which is
clearly resonating, with SOLD OUT shows in major markets like Chicago
and Sacramento.

“So far the BIG, BIG PLANS TOUR has been everything I could’ve imagined,
and I’m continually blown away by the energy of each crowd night after
night,” says Lane. “I’m excited to have both Blanco Brown and MacKenzie
Porter join me on this new leg along with ERNEST. I want my show to be
great from the first song to the last, and I know it will be just that
with these incredible artists!”

The news comes after a whirlwind year of personal and professional
milestones for the Country hitmaker. Between scoring another
GOLD-certified #1 with “I Don’t Know About You,” sharing the story of
his engagement and marriage to Lauren Bushnell through the chart-rising “Big, Big Plans” single and being featured in PEOPLE’s Sexiest Man Alive issue, 2019 has been a banner year – and there’s more on tap for 2020.

To purchase tickets, and to learn more about Chris Lane, go to iamChrisLane.com

Singer-songwriter MacKenzie Porter is a rising Country talent whose
sound knows no borders. Signed to Big Loud Records, she’s now emerging
behind a trio of hook-laden tracks – “About You,” “These Days” and
“Drive Thru” – all produced by Joey Moi (Florida Georgia Line, Jake
Owen, Morgan Wallen). Since moving to Nashville in 2014 from her native
Canada, she’s worked to develop a radiant Country style which threads
the needle between traditional heart and modern energy, often
collaborating with hit writing Nashville mainstays like Nicolle Galyon,
Craig Wiseman, Natalie Hemby, and Tommy English. Her signature sound has
sparked a list of headline-worthy accolades, including a prestigious
nomination for Country Album of the Year at the 2015 JUNO Awards and three Female Artist of the Year
nominations from the Canadian Country Music Awards as well as her first
Canadian #1 single with “About You.” She’s toured extensively on her
own, shared the stage with Kenny Chesney, Rascal Flatts, Blake Shelton
and Dallas Smith, and also co-starred on the Netflix series Travelers. The multi-talented artist will hit the road again in early 2020 joining Chris Lane’s nationwide BIG, BIG PLANS TOUR.