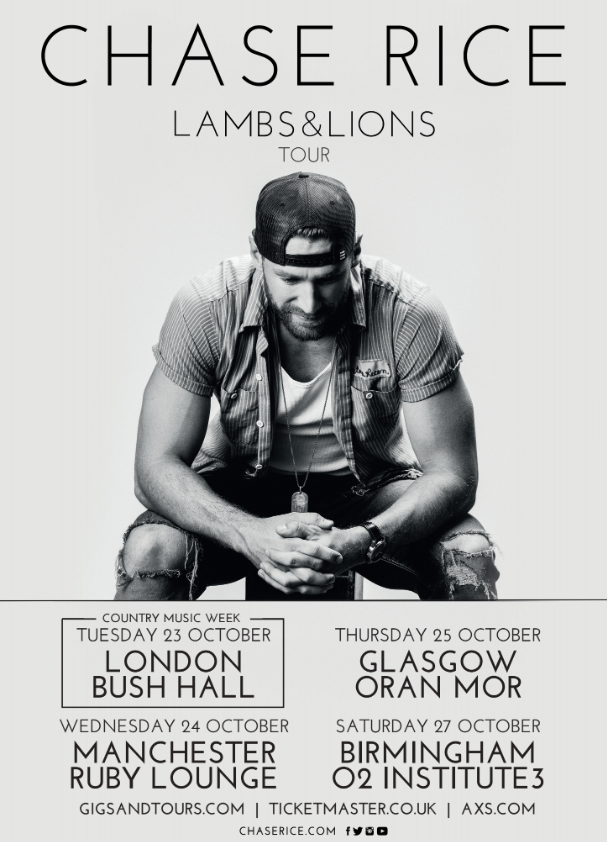 LONDON, UK (6th June 2018 – for immediate release) – One of country music’s most exciting voices, Chase Rice,
has announced a UK leg of dates for his Lambs & Lions tour this
October, following his sold-out first ever run of shows in the market
late last year, which led to rave reviews from critics including
Entertainment Focus, Lyric Magazine, and Whiskey Riff. The tour sees
Rice returning to Glasgow, Manchester and Birmingham, and a date at Bush
Hall in London as part of AEG’s Country Music Week:

The new album ‘Lambs & Lions’ is out now on BBR/BMG, with lead single ‘Three Chords and The Truth’
continuing to gain airplay on both sides of the pond, including support
from Bob Harris on BBC Radio 2, Chris Country, and many more.

ABOUT CHASE RICE:
Chase
Rice has become one of country music’s most exciting figures since
arriving in Nashville, building a loyal fan base across the world
through his energetic live shows and gaining the attention of music
critics and industry professionals alike with his edgy, eclectic sound.
The North Carolina native recently released his sophomore album, Lambs
& Lions, with new label Broken Bow Records (BBR/BMG). Rice’s debut
album Ignite the Night debuted at No. 1 on Billboard’s Top Country
Albums and No. 3 on the all-genre chart, and produced a pair of Top 5
hits, the Platinum-certified “Ready Set Roll” and “Gonna Wanna Tonight.”
After supporting Kenny Chesney’s The Big Revival Tour 2015, Rice
consistently sold out 2,500-3,000 seat venues on his JD and Jesus Tour
and Everybody We Know Does Tour, and is currently on the road headlining
his 2018 Lambs & Lions Tour. His first single from Lambs &
Lions, “Three Chords & The Truth,” is currently in the Top 25 on the
country charts and available at digital retailers now.

‘Lambs & Lions’ is out now on Broken Bow Records/BMG.
www.chasericemusic.com