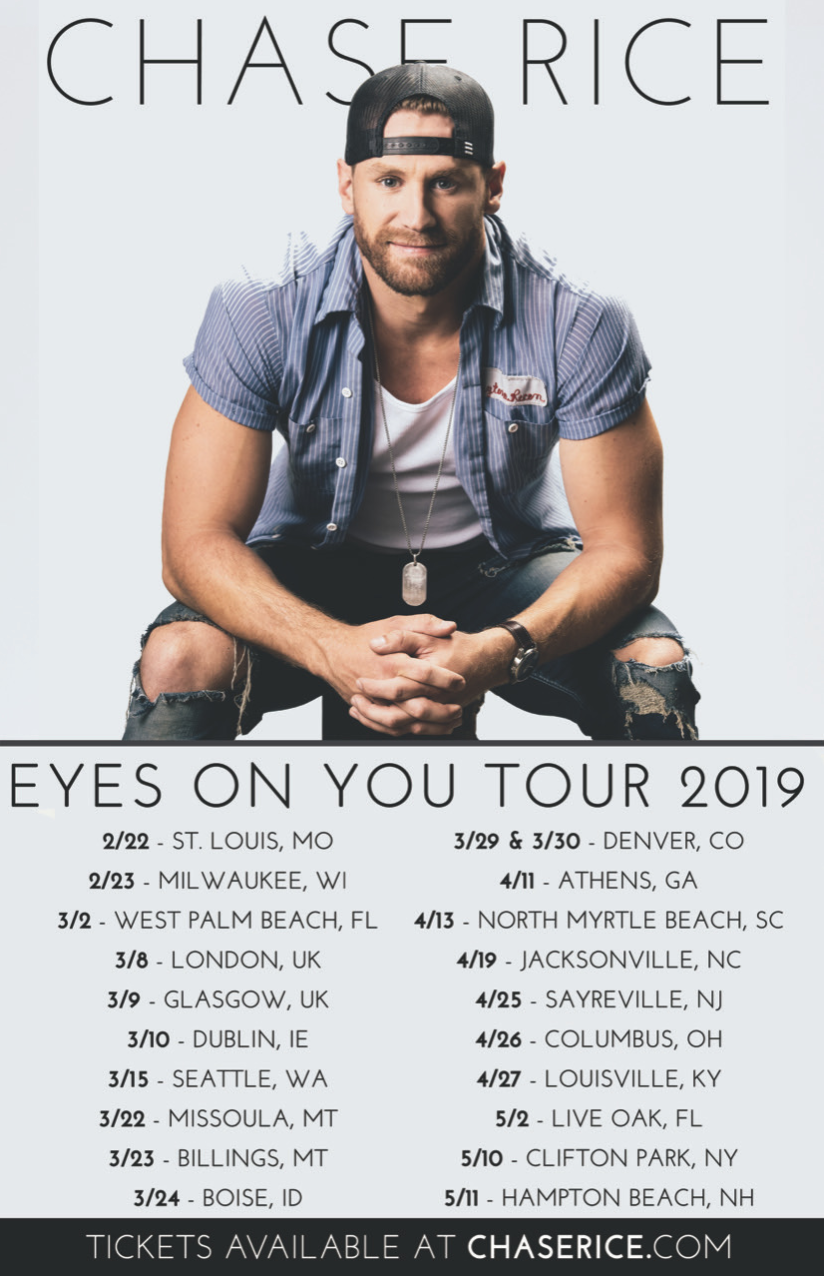 Platinum-certified entertainer Chase Rice continues his run of headlining success as he continues the coast-to-coast Eyes On You Tour into 2019, announcing 21 additional dates across the U.S. and Canada.

The second leg begins Friday, February 22 in St. Louis, Missouri and
continues through Saturday, May 11 in Hampton Beach, New Hampshire,
following Rice’s string of sell-outs on the first leg of the Eyes On You Tour as well as six shows as direct support on Luke Bryan’s Farm Tour 2018.

The Tennessean highlights his “national fan base, thanks to a ferocious touring schedule” while Taste of Country proclaims that “the unapologetic rock and R&B influenced showstoppers make his live show an event to catch.” AXS.com agrees,
remarking that “Rice commands a performance with such force and zeal,
that he will have you hooked from the time you walk in the doors to the
time you leave.”

“Having a song like ‘Eyes On You’ connect at this level has taken our
live show to another level,” shares Rice. “Every night I have to take a
minute and film them singing the words back to us on stage.”

The tour takes its name from Rice’s current single “Eyes On You,” praised by Billboard as “the latest sign for Rice that things are working” and Wide Open Country as
“the tune that elevates him to the next level… the type of song that
could become a singalong staple of Rice’s live show for decades.” The
song that became a fan-favorite at live shows and on streaming platforms
before even being announced as a single is now Top 30 and climbing at
Country radio.

Country
music maverick Chase Rice has become one of country music’s most
exciting figures since arriving in Nashville,building a loyal fan base
across the country through his energetic live shows and gaining the
attention of music critics and industry professionals alike with his
edgy, eclectic sound. The Tar Heel State native released his sophomore
album, Lambs & Lions, in November 2017 with new label Broken Bow Records. The first single from Lambs & Lions,
“Three Chords & The Truth,” was a Top 20 hit at country radio and
the follow-up, “Eyes On You,” is now Top 30 and climbing after fans
streamed it over 50 million times before even learning it would be the
next single. Rice’s debut album Ignite the Night debuted at No. 1 on Billboard’s
Top Country Albums and No. 3 on the all-genre chart, and produced a
pair of Top 5 hits, the Platinum-certified “Ready Set Roll” and “Gonna
Wanna Tonight.” After supporting Kenny Chesney’s The Big Revival Tour, Rice consistently sold out 2,500-3,000 seat venues on his headlining JD and Jesus Tour, Everybody We Know Does Tour and Lambs & Lions Tour. He recently served as direct support on the Luke Bryan Farm Tour 2018 before going overseas for a headlining U.K. run in advance of his highly-anticipated Eyes On You Tour, which continues into 2019.