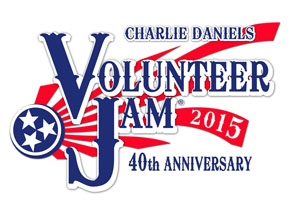 Charlie Daniels 40th Anniversary Volunteer Jam – Jam Packed
With Highlights
There were cheers, there were tears, there were standing
ovations, spontaneous sing-alongs, honored guests and music legends in the lineup.
What is was?  The Charlie Daniels 40th Anniversary Volunteer Jam at the Bridgestone
Arena in Nashville.
The Jam celebrated its anniversary in style.  For this benefit show raising funds for The
Journey Home Project, Charlie Daniels had rounded up some of his artist friends
for the occasion, and it was not just any round up – it was jam-packed (pun
intended) with megastars:  Alabama, The
Oak Ridge Boys, Travis Tritt, The Kentucky Headhunters, Ted Nugent, Phil  Vassar, Terri Clark, Wynonna, Tracy Lawrence,
Montgomery Gentry, Billy Ray Cyrus, Colt Ford, Craig Morgan, Blackberry Smoke, Michael
W. Smith,  Billy Dean, Ryan Weaver, Lee
Roy Parnell, Lee Greenwood and the surprise guests Eric Church, Jamey Johnson,
Jeannie Seely and – wait for it – Lynyrd Skynyrd.
Lee Greenwood had the honors of opening the show with his
“God Bless The USA”.  Patriotism
was the theme of the night, and very understandably and rightfully so.  Proceeds  benefited The Journey Home Project, which is
a non-profit organization with the mission of connecting donors with
organizations that do the most good helping returning veterans find their way
back to civilian life.  Additional proceeds
went to the Nashville Predators Foundation.
Emcees this evening were the media personalities Sean
Hannity and Storme Warren, who both did an excellent job entertaining the
audience between the quick changes of sets on the stage.
Most of the artists performed one song each, with the
exception of Lynyrd Skynyrd and the master of ceremonies himself and his band,
Charlie Daniels and The Charlie Daniels Band.  The sold out arena attendees got to hear hit
song after hit song from the megastars and their guests.  Lovers of the popular TV-series “Nashville”
were presented a little treat when Charles Esten, who plays Deacon, joined with
one of the stars.  It felt like every act
was a highlight, but the highlights of the highlights must have been 1. The
instrumental “Black Ice” by The Charlie Daniels Band where the band
members showcased their superb musical skills on their respective instruments
including Charlie Daniels on electric guitar and 2. Jamey Johnson with an
acoustic guitar and the ability to express every word and emotion through his
singing.  It is not every day that one,
lone man with a guitar can hold the attention of an entire arena full of people
for the duration of an entire song. That happened at the jam when Jamey Johnson
came on stage and the song choice and intensely laid back and soul filled performance
of Wood Guthrie’s “This Land Is Your Land” was both fitting and a
contrast to the program as the crowd lovingly sang along. Closed out the
concert did Lynyrd Skynyrd with their hits “Call Me The Breeze” and
“Sweet Home Alabama”, joined in on fiddle did Charlie Daniels, who
both before the show started and now at the end shouted “Ain’t it good to
be alive and be in Tennessee!”.  It
sure was.
Shelley Ridge for Country Music News International Magazine