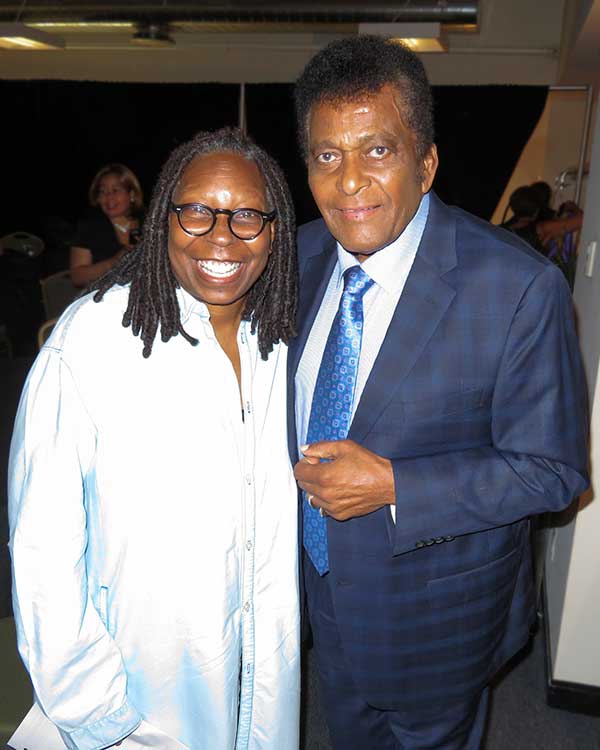 CHARLEY PRIDE SET TO PERFORM ON “THE VIEW” OCTOBER 12

NEW YORK, N.Y.
– Momentum continues for trailblazing country music icon Charley Pride
this year with an appearance on ABC’s “The View” October 12. Click here
for listings. Pride’s appearance on the “The View” will follow a
whirlwind of television and media appearances for the Country Music Hall
of Fame member, who recently released his first album in six years Music In My Heart available here.

Pride and Whoopi Goldberg ran into each other at the Recording
Academy® Special Merit Awards when Pride received the Lifetime
Achievement Award earlier this year. The honor comes after Pride’s
recent celebration of his 50th year in country music.

“Whoopi and I spent some time together in New York at the Special Merit Awards
where she was also accepting an award. We had a nice conversation and
I’m looking forward to seeing her again and performing on ‘The View’
October 12,” Pride said.

Charley Pride is celebrating more than 50 years as a recording
artist. He has enjoyed one of the most successful careers in the history
of country music and is credited with helping to break color barriers
by becoming the first black superstar within the genre. A true living
legend, he has sold tens of millions of records worldwide with his large
repertoire of hits. A three-time GRAMMY® award and Recording Academy
“Lifetime Achievement Award” winner, Pride has garnered no less than 36
chart-topping country hits, including “Kiss An Angel Good Morning,” a
massive #1 crossover hit that sold over a million singles and helped
Pride land the Country Music Association’s “Entertainer of the Year”
award in 1971 and the “Top Male Vocalist” awards of 1971 and 1972. A
proud member of the Grand Ole Opry, Pride continues to perform concerts
worldwide and has toured the United States, Canada, Ireland, The United
Kingdom, Australia and New Zealand over the last several years. For more
information, visit CharleyPride.com.