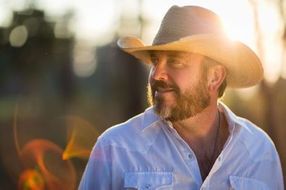 For
over a decade, singer-songwriter and musician Brandon Rhyder was living
the high life as one of the most celebrated music artists to come out
of Texas. Widely exalted for his exquisite ability to couple gorgeous
melodies with superb storytelling and deeply admired for his signature
songbird vocal style, Rhyder was on top of his game, and then one day…
he wasn’t. Health issues that could not be explained robbed him of his
resilience, his singing ability, and worst of all, his confidence
leaving him to wander in the no-man’s land of despair and bewilderment.
Brandon Rhyder has privately trekked this onerous journey for half a
dozen plus years in search of reclaiming himself, his music and his
inner fortitude. Now, armed with answers to long unanswered questions,
Rhyder is ready to open the book on his long hiatus from the music
spotlight, and on September 13th, he will reemerge with a brand new song
for the ages.

18
years of highly praised albums, a rigorous tour schedule of 175 plus
dates a year, a publishing deal in Nashville and the privilege of
working with top-notch songwriters like Liz Rhodes, Keith Gattis, Lori
McKenna and Radney Foster, Rhyder was harvesting the fruits of his
labor. It was 2012 when the downward slide began. What felt like flu
symptoms kept a hold on Rhyder with regularity. His performances on
stage became a gauntlet he had to cross every night. His vocal power
decreased rapidly and his struggle to hit notes that were always before
well within in his comfort zone were now just too far out of reach. He
recalls very clearly, “I’ll never forget one night I was on stage and I couldn’t remember the words to one of my songs. I
was trying to hit those notes by forcing it, but I was just hurting
myself, and when you lose confidence, it messes with your mind.” No
matter how much he searched for answers, the tally of personal and
professional losses was mounting. His time honored ritual of meeting
fans after each show was another painful loss for Rhyder. He was
exhausted after performances, and time between shows was often spent
just trying to recover. Trying to nurture his personal relationships
with his music peers was also a painful loss. How could he explain his
strange behavior to them when he didn’t know what was wrong? Doctors
were seen, tests were run, no answers were found, so with no hope of
resolution Rhyder stepped away from the spotlight and moved his family
out to the country in an effort to live a simpler life. Having this
time with his wife and 2 kids was indeed good medicine and in 2017 after
several years of looking inward, he released his self-titled album
produced by longtime comrade Walt Wilkins. The album was hailed as
another classic soundtrack with all the signature qualities Rhyder is
known for. Praised by the media including Rolling Stone Country, Taste
of Country, TheBoot.com, Wide Open Country and Lone Star Magazine, it
seemed like his musical flare was not lost, but the health issues
continued to plague him and he couldn’t shake the self-doubt. Questions
like: “Am I crazy?” “Is this all just in my head?” “Am I just being lazy?” “Is this what middle age feels like?”
played like disgruntled melodies through his mind. He decided to make
some changes; quit using nicotine, reduced his caffeine and alcohol
intake, nothing helped. In 2018 he was hospitalized, but couldn’t be
diagnosed and was given antibiotics and steroids. Then, in January 2019,
the mystery was finally solved. He met a different kind of doctor, a
functional medicine practitioner who took 4 vials of blood from Rhyder
and handed him back 70 pages of confirmed food allergies that was
causing his internal issues. With immediate dietary changes his life,
body and signature voice has rebounded. Now able to reach those notes
he hasn’t been able to hit for years, Rhyder has reemerged a brand new
man with a brand new single and a live acoustic album to follow.

On September 13th Brandon Rhyder will release his new single “I Felt Good Today,”
a magnum opus of a song inspired by his resurrection and layered with
the poignant sentiment of loss. The song emerged out of the ether like a
sunbeam breaking through the clouds. Driving home from Galveston on a
beautiful January afternoon, 55 degrees, widows rolled down, enjoying
the perfect solitude, and quietly, the gripping melody bored into his
unsuspecting mind like a new virus. Within minutes the song took its
first breath of life, and when it happens that fast, it’s almost always a
divine cosmic energy that brings it forth. These are the kinds of
songs that never die. They snap the ears to attention and the heart
into feeling within seconds of the opening chords. It’s an ode to his
newly regained well-being and also to his beloved father-in-law whom he
recently lost. “I Felt Good Today” speaks the language of the
soul and carries the freight of human inspiration, the incredible will
to carry on. It’s a ray of light that traverses the darkness and waltzes
away with your heart in perfect three quarter time.

This song and 3 other new studio recorded creations will join some of Rhyder’s classics like “Freeze Frame Time,” “Backroads.” “Rock Angel” and “Let The Good Times Roll” on his forthcoming live acoustic album “Main Street Crossing”
to be released later this year. The acoustic aspect of Rhyder’s life
is the genesis of his career and the means by which he became a
songwriter. His 10th album release to date, “Main Street Crossing”
intimately represents the best of Brandon Rhyder’s music both old and
new, and is the culmination of two separate nights of live acoustic
tradition recorded at Main Street Crossing in Tomball, Texas. It’s raw
and exposed, much like the man himself these days, and it showcases a
redeveloped voice beautifully seasoned by trial. At his core, Brandon
Rhyder is a songwriter who has the uncanny ability to create songs that
mean different things to different people. He writes the stories of our
lives exposing all the milestones that make us human. Today he travels a
brand new road and the new music fueling this ride has never been
better.

“When
you chase your dream, and fulfill that dream, that just makes you a
dreamer for life. This is a second chance that I never thought I would
ever get. Now, I feel like the best part of my writing is ahead of me.”