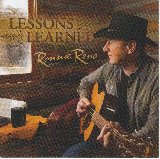 LESSONS LEARNED
Ronnie Reno (Rural Rhythm Records)
Ronnie Reno may be familiar to tens of
thousands of people who have never purchased one of his albums or
downloaded any of his songs. He is the host of the long-running TV
show, “Reno’s Old Time Music,” that pulls in more than a
million viewers monthly on RFD-TV and earned him the title of “IBMA
Broadcaster of the Year” in 2013.
Reno’s music career goes back a
L-O-N-G way, beginning in 1955 at the age of eight, performing with
his father as part of Reno & Smiley and The Tennessee Cut-Ups
(whose recording of the Don Reno-penned “I’m Using My Bible as a
Roadmap” reportedly saved King Records from bankruptcy).
Ronnie Reno is still very much alive
and kickin’ in 2015, and, at age 67, the man who describes himself
as “Bluegrass music’s youngest old-timer” has released his
first studio album in over a decade. By mid-July, ‘Lessons Leaned’
was already hovering in the Top Ten of Billboard’s Bluegrass chart.
‘Lessons Learned’ showcases Reno at
his best with eleven tracks that make the most of his easy-going,
laid-back vocal style and mature songwriting talent.
The album kicks off with “Lower Than
Lonesome,” a song with a sad theme but to which Reno adds a new
twist by presenting it as an up-tempo cut – and it works. As Reno
says, “I wanted to write an up-tempo song that wasn’t the high
lonesome sound but the low lonesome feelings you have and how you
deal with emotions when you lose the love of your life.”
Similarly, on “Our Last Goodbye,”
Reno turns what is often a heartbreak song concept into a positive,
saying that second chances can work out if you are prepared to try
one more time.
“I Think of You” is the sweetest,
most lyrical song on the album. “There’s not a day goes by I
don’t think of you / I remember the good times and all we’ve gone
through / I think of our love, I know you do too / Not a day goes by
I don’t think of you.” In the album’s liner notes Reno says of
the song, “Every man thinks of his wife or special person this way,
so this is from us to you.” Awwwww…!
On a different tack, Reno gives us “Bad
News at Home,” a wry look at learning lessons the hard way when it
comes to ‘messing up’ at home, staying out late playing poker
with boys.
“Reno’s Mando Magic,” a classic
Bluegrass instrumental featuring Reno’s mandolin prowess, was
written just twenty minutes before it was recorded and sparkles with
the spontaneity that comes from a studio full of skilled musicians
rising to the joy of giving their all to a brand new tune. Released
as a single, the cut debuted in the Top Ten of the Bluegrass Today
chart in July.
On a bonus track, “Always Late,”
Reno duets with David Frizzell on a song written by Frizzel and
Blackie Crawford that Reno used to do, back in the day, with Merle
Haggard, and in this high-energy arrangement, features the amazing
sound of not one, not two, but three mandolins, rounding out a
powerful album and leaving the listener breathless.
Reno is
celebrating his 60th year in the music business on August
5 with a special appearance on the highly acclaimed radio show,
“Music City Roots Live From the Factory,” playing selections from
throughout his career as well as songs from the new album. (You can
check out details about the show at www.musiccityroots.com
)
Over the years, Ronnie Reno has shared
the stage with the likes of Johnny Cash, Conway Twitty, The Louvin
Brothers, Willie Nelson, Merle Haggard, The Osborne Brothers and many
more. With “Lessons Learned” Reno delivers an album that will
please Bluegrass fans both old and new.
For more about Ronnie Reno, visit
www.ronniereno.com
CD review by Preshias Harris for Country Music News International
# # #