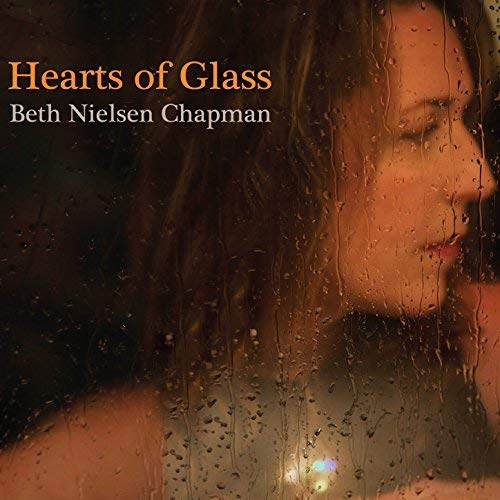 Track List: Come to Mine / Old Church Hymns &
Nursery Rhymes / Epitaph for Love / Enough for Me / Rage on Rage /

HEARTS OF
GLASSis an11-track project that was released in
the UK prior to a four-week tour. Itmarked Beth Nielsen Chapman’s
twelfth solo album and her first new material since THE MIGHTY SKY dropped 6
years ago (she also released Liv On, a collection of healing songs with Olivia
Newton-John and Amy Sky in 2016).

Another first was she tasked producer duties to Sam Ashworthallowing
him complete creative control. He is the son of Charlie Peacock (Civil
Wars producer). After early conversations with
Ashworth, Chapman felt self-assured that this would be a successful
partnership. Chapman has been making wonderful records since 1990 with
many top producers, but she had been at least a co-producer.

“Creatively this was an interesting new dynamic for me,”
Chapman shared. “Handing over so many of the decisions and trusting the
process, while trying to quiet my inner control freak. By doing so, I ended up,
not only with something I loved, but I learned a lot about myself and the
places you can go when you let someone else drive.”

For those that study album credits
I was constantly drawn to her name throughout the 90s with a catalogue
of many favourite cuts such as “Down on My Knees” (Trisha Yearwood), “Five
Minutes” (Lorrie Morgan), “Happy Girl” (Martina McBride) “Strong Enough to
Bend” (Tanya Tucker), and the CMA winning song “This Kiss” (Faith Hill).

Like many her 1997 album Sand and
Water (co-produced with Rodney Crowell) was a starting point to her solo work
and remains very special to this day.

Having lost a husband to cancer and a breast cancer survivor
herself her songs have healing powers and with her heartfelt references to
grief she has captured better than most.

New set HEARTS OF GLASS is a
collection of sparse arrangements that continues that signature vein of
vulnerability with positive messages in finding strength, which includes
several new compositions and a few outstanding versions of rediscovered songs.
Riveting and sparse, these songs, like the heart, traverse the delicate line
between vulnerability and strength.

As well as new material fans will recognize some of the
tracks which have been re-recorded from earlier albums along with songs she has
written but had never recorded herself and arranged for guitar rather than
piano.

The shiny new Come To Mine kicks off the album, a
co-write with Graham Gouldman and Kevin Montgomery that materialized from Chris
Difford’s songwriting retreat in Somerset. The carefree song has some gentle
catchy rolling rhythms as love blooms in a confused modern world.

The song Epitaph For Love, featuring Matt
Slocum on cello, is a delicate and haunting ballad. It talks of being thankful
for what you have and overcoming sad losses through love.

Enough For Mehas a joyful upbeat vibe with warm touches
courtesy of employing flugelhorns in the bouncy mix.

Rage on Rageis a dark affair re-visiting her 1993 album YOU
HOLD THE KEY. It speaks ofdrinking which leads to domestic abuse which has resurfaced
from the past: Oh, my sweet one, What
have I done, Turn back the page and see, All that was done to me

You’re Still My Valentineis a
softly spacious lullaby which lets the singer to be front and centre with words
drifting perhaps in the Paris romantic air.

All for the Loveis a soothing affair and the gentle Child
Again is reborn from her 1990 debut which paints a picture of an
elderly woman in a nursing home reliving her youth.

Life Holds On,the opening cut on her 1990 debut here is stripped
right back to Beth’s voice and the throbbing of an electric guitar with
hymn-like harmonies.

Dancer to the Drumis again a new reading which treads
an unknown path as a child embarks on life: One
is born into a life of hunger, One will be a king or a rich man’s son