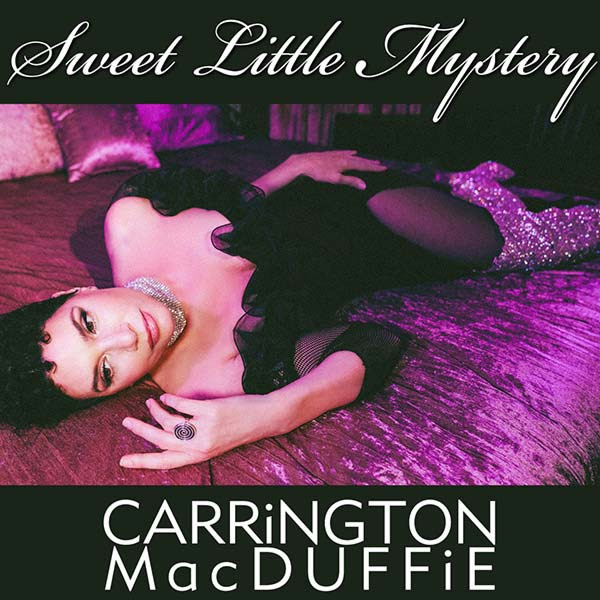 Far-reaching influences of a musical New York childhood weave through Carrington Macduffie’s unusual, hook-laden songs, and stand out in her new EP “I’m The One,” which evolved through rapid spiritual and personal growth into the form of dynamic music. Pulling from all facets of life, Carrington channels her diverse musical tastes into an edgy blend of roots, pop, and rock, resulting in a sound all her own. In Scotland in 2018 Carrington had the thrill of performing in a church on the site where her ancestors worshipped. The experience deepened her connection to her Scottish roots, and to the country itself.

Tell us about your 2-month tour of the United Kingdom in 2019?

That was a wild and woolly tour. I played all kinds of venues throughout England, Scotland and Wales, mostly an electric duo with my guitarist but also some dates with a full band. I had 3 different guitarists on that tour, all of them were terrific, but conditions on the road are changeable and you have to be able to go with the flow. We played some venues in London, and various festivals including a couple of Pride Festivals. It was a much longer tour than most sane people would attempt, but the booking wound up that way and actually it enabled me to connect with some really great musicians and a range of crowds.

How much do you like your career as a renowned and versatile voice actor? Which roles have you played recently?

This is a wonderful career, because it draws on all such a high skill set. I recently narrated a children’s book, playing the part of a 10-year-old boy from Texas, and also a book titled “Arnold Falls,” in which I played about 20 different comical characters, and which won an audiobook award. Perhaps my favorite role in this story was the irascible reprobate politician in this New York State town.

How many poems were included in your book “On the Dreaming Earth” and what inspired you (influences etc.)?

I’m very influenced by the surrealist poets of the early 20th century, also by Rilke, and by the lyric poets throughout the 20th century. The book is 62 pages long, with about 50 poems. I’ve collaborated on a German translation of one of them, “White Rose,” which I’m planning to set to sound and video: “Die Weiße Rose”. I’m just getting the shop set up on my website, and the book will be available there (carringotnmacduffie.com)

What are some of your hobbies?

I’m currently training in target shooting, with a 9mm handgun, and I’ve also done some training in performance driving on the race track, and in small plane piloting. Other than that. I’ll dance any time I get the chance!

Tell us about your family – are they supportive of your musical achievements?

I have 3 sisters, all very different and all of whom I adore. I do feel they are supportive, and all are interested in music in their own lives, in different ways. They can all sing too!

What is your favorite song among all the songs you have recorded and what’s the story behind it?

Like most artists, my most recent song tends to be my favorite, so I’ll chose that one for now. “You, Baby” will be included on my upcoming LP.  I recorded it in Nashville with my super fine musicians there, then tracked vocals at my drummer’s studio, and then wound up changing the drums and working with a different drummer in New York for the final drum track. So there were 3 drummers on this prroject, and we retained the percussion from one and the drum performance from another. I wrote it to a Bossa beat so the groove is crucial.  I wrote the song while kicked back in my chair after a long day shooting video out on a boat on a lake on an extremely windy day with a really fun, handsome boat captain, and I suppose I was inspired by the chemistry we experienced in front of the camera that day.

Who inspires you musically?

I’m inspired by a wide range of musical styles, but especially by certain Americana songwriters — John Prine for instance, and Guy Clark. Most recently though I’ve been listening to Britpop – bands of the ‘90s – Oasis, Blur, Pulp, The Stone Roses.

Which university did you graduate from and were you crafting songs during your studies there?

I attended three universities but obtained my Bachelor’s degree from Boston University, in English. I also was deep into French throughout my schooling, and at BU I had the good fortune to take courses at the Program in Artisanry — weaving on a floor loom — and also got interested in astronomy and the physics of music.

Do you plan any duet in the future?

I actually haven’t performed a duet yet, but it’s in the works! My guitarist in Glasgow, John Gray, is an extremely fine classical guitarist and a wonderful vocalist, and we’re working on a collection of acoustic numbers that will yield at least one duet — probably a duet of the title track of my forthcoming album, “Sweet Little Mystery”.  If you’d like to hear his acoustic guitar playing, you can check “The Kiss I Didn’t Get Last Night (Acoustic)” on my YouTube channel: THE KISS I DIDN’T GET LAST NIGHT (ACOUSTIC) Official Lyric Video. We started working together when I was on tour in 2019 and needed a guitarist right away. I was referred to him and it was a great match. He’s my music director in the UK now.

What are the stories behind your singles “Sweet Little Mystery” and “The kiss I didn’t get last night“?

“Sweet Little Mystery” outlines the mystery of romantic attraction — something we can never fully understand, but is imbued with magic; and it’s the magic that I’m really in love with, which is what this song is about.  I wrote this song in Glasgow in the deeps of winter in 2020, in an empty flat overlooking the city, while the snow was falling and disappearing into the River Clyde.

The Kiss I Didn’t Get Last Night arose from a longing for connection that I think we all feel — and there is a specific understanding between women that is being specifically sought after in this song. So it’s a love song to someone as yet unmet at the time of the writing….

Next up is “Baby Played Me,” which drops on April 9th — this weekend! — with a video following on April 30th.  This song expresses the separation anxiety following the connection that musicians make with each other through music. Playing music together is a form of falling in love — and there’s a certain amount of heartache when you have to separate, but the beautiful thing is the recorded music that remains.