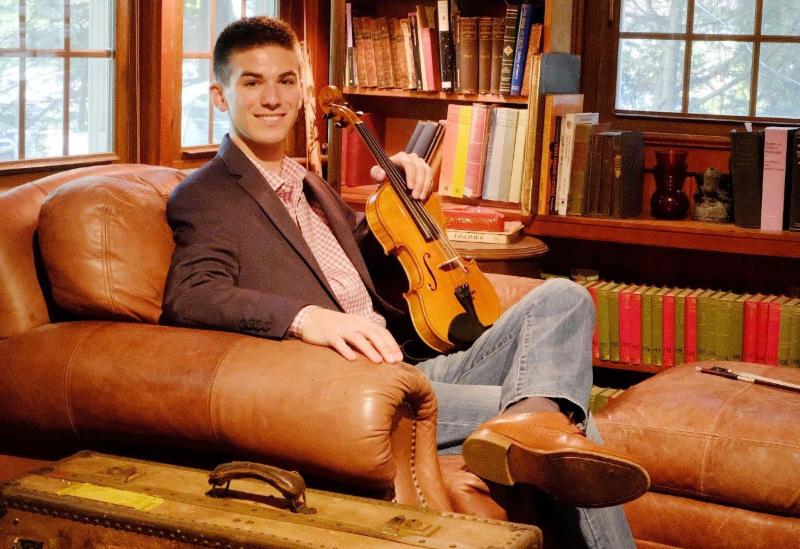 Daniel Greeson To The Fold

“Daniel will bring a whole new dimension to our sound.”

“We’re
really excited to have Daniel join our band,” says Skip Cherryholmes,
founding member and guitarist for SIDELINE. “He will be the youngest
member of the group by far, but he has a great understanding of the old
style and gives it youthful execution and tenacity.”

Just
21, Daniel already has years of experience under his strings. The
Jamestown, North Carolina native began playing fiddle when he was only
six years old – after his uncle found a fiddle in the trash. Under the
tutelage of J.B. Prince, he would go on to join the famed Junior
Appalachian Musicians program. JAM offered Daniel the chance to meet
many great players – and he would go on to study under Dewey Brown and
Hunter Berry. Currently enrolled in the Bluegrass program at East
Tennessee State University, Daniel has been a traveling member of the
Bluegrass/Gospel group, The Churchmen, for the last three years.

Notes
Daniel, “I’ve been blessed to play with some wonderful musicians and
meet some great people these past few years. I look forward to the
opportunity to travel and grow that SIDELINE offers.”

The newcomer joins the powerhouse players just as their latest single, “Thunder Dan,” is impacting radio. The track is from the band’s upcoming album, FRONT AND CENTER, on Mountain Home Music Company.

A
pedigreed six-piece powerhouse that has set the pace in Bluegrass for
over two decades, SIDELINE was founded by Steve Dilling (banjo), Skip
Cherryholmes (guitar) and Jason Moore (bass). The three have all made
historical and significant contributions to the genre as members of
highly-awarded groups, with multiple Grand Ole Opry appearances, and
years of global touring behind them. What started as a side project for
these seasoned players soon moved to the front and center, and the band
is now rounded out by Bailey Coe (guitar), Troy Boone (mandolin) and
newest member, Daniel Greeson (fiddle). With songs that range from
pulse-pounding barn burners to those sung from the heart, this sextet
brings perfected timing and dynamic – as well as visceral emotion – to
their music. With three previous successful album releases, audiences
have found that whether live or recorded, the group moves dynamically
from well chosen, neo-traditional covers to new material curated with a
holistic sense of identity and mission. Add their on-stage energy and
powerful harmonies to the mix, and you have the best of the revered
Carolina-Grass sound.