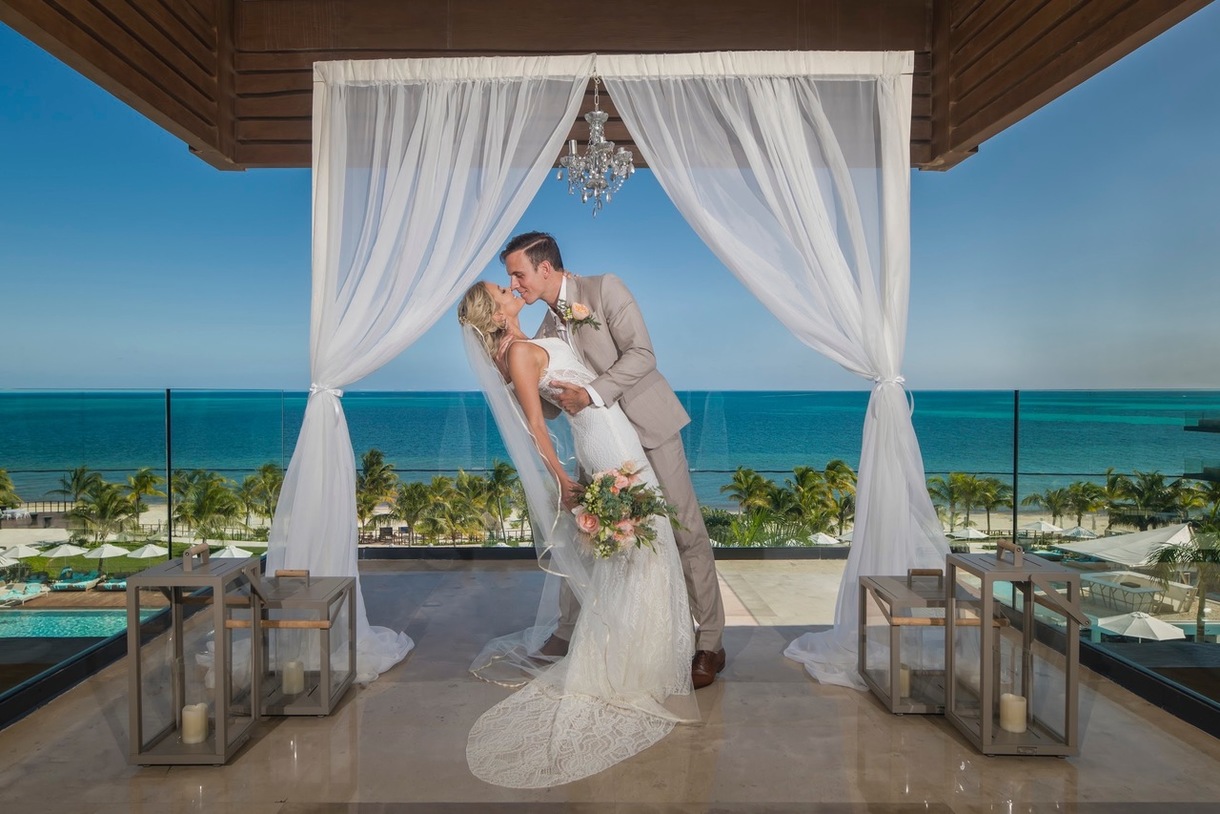 Canadian country artists Eric Ethridge and Kalsey Kulyk have officially wed, opting for a warmer weather wedding at Mexico’s Haven Riviera Cancun on Tuesday, December 3.ET Canadabroke the news, treating fans to a first look at photos from the day on Friday (12/6).

“It was more beautiful than I could have imagined. She had been showing people pictures of her dress for a month, so I was just dying to see her in it,” Ethridge toldEW Canadaof seeing Kulyk in her dress for the first time. “Watching her walk down the aisle was something I’d imagined for a long time and it exceeded my wildest expectations.”

The two met in a songwriting session in 2017 after Ethridge reached out to Kulyk and other finalists in the Canadian Country Music Association’s Discovery Program, having won the award the previous year (2016). He and Kulyk (who then won the 2017 award) started dating a year ago.

“We were touring Canada, but on opposite sides of the country and Eric called saying, ‘I’m coming over for your birthday. Want to go to Banff?’” Kulyk told the outlet of the proposal. “We were on the side of a mountain and he showed me [footage] from the drone connected to his phone, then said, ‘Hold on. I’ve got to grab a cable.’ Then I saw him on one knee in the footage! He totally surprised me.”

The intimate ceremony gathering included a sand ceremony, hand-written vows and a seaside reception, where the two danced to a cover of Bryan Adams’ “Heaven,” which they pre-recorded as a duet.

Ethridge and Kulyk, who both call Anthem Entertainment their label home, have experienced great success this past year in their prospective careers: Ethridge toured extensively and, in his down time, hit the studio to work on his sophomore album, due out early in 2020. The video for his debut single “If You Met Me First” premiered exclusively withBillboard, who praised Ethridge’s “smooth vocals” and “yearning lyrics” on the track.

Self-made singer songwriter Eric Ethridge is making his way across North America connecting with audiences and living out his wildest dreams. With an undoubtedly unique path, this past year has seen him pivot from a profession as a doctor to full-time country artist. Still practicing when he released his first self-titled EP, which features his breakout single debut, “If You Met Me First,” the ability to express himself creatively was what always gave him the most joy. “To me, a successful life is doing something you love while changing people’s lives for the better while doing it.”

Canadian-raised, his EP hit Number One on his country’s overall iTunes chart and was streamed over 3 million times in the first 6 weeks, with no promotion. Subsequently, the lead track earned a coveted spot on SiriusXM’s tastemaker program “On the Horizon” for 24 consecutive weeks.

Performing in a cover band while attending chiropractic school went along with his four jobs to help pay for the prestigious degree. His passion and focus shifted to music thanks to a string of rapturously received festival appearances, performing to crowds of 40,000. As his music and fanbase grew (thanks in part to wildly popular YouTube covers), Ethridge landed a performance slot betweenThomas RhettandFlorida Georgia Lineat the major Canadian country festival, Boots and Hearts when he realized he needed to follow his heart and pursue music full time.

“I’m so grateful every day. I cannot wait to continue building this life in music,” he says. “Every day is an opportunity.”

The Canada native has been honing her craft since the time she could talk. Her first talent show was at three-years-old and she owned her first guitar at 13. In high school, Kulyk was diagnosed with Hodgkin’s Lymphoma and underwent six months of chemotherapy. Though a bit of a setback, the turn of events solidified her love of music and her call to create it. “There were a lot of people I got to meet during chemo. I’d run home and write about their incredible stories. I had to get it all out, and I wanted to give that voice to people that didn’t necessarily have it.”

After recovering, Kulyk spent time in Las Vegas studying music underFleetwood Macproducer Richard Dashut and made frequent trips to Nashville for meetings and co-writes. In 2017, she was invited to participate in both the Canadian Country Music Association’s Discovery Artist program, as well as ole’s “On the Spot” competition, winning both. She now proudly calls Music City home, where she is busy launching her career.

“I’m really excited about the music that I have now. I feel it really encompasses everything about me and who I am, and what I want to give to my audience. I grew up around a lot of old school and ‘90’s country music – John Prine, Dolly Parton, Shania Twain, Emmylou Harris, Jason Isbell – and I think that can be heard in the overall style of my music.”