BRENDA LEE NO. 1 ON BILLBOARD 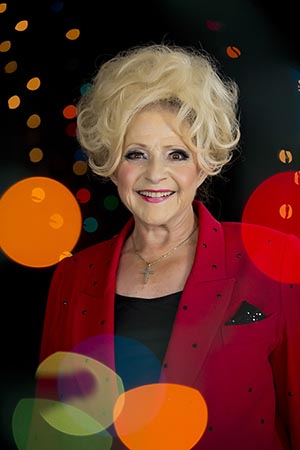 BRENDA LEE NO. 1 ON BILLBOARD COUNTRY STREAMING CHART WITH “ROCKIN’ AROUND THE CHRISTMAS TREE”

Country Music Hall of Famer’s Christmas Classic Breaks Top 40 on Billboard Hot 100
NASHVILLE, Tenn. (December 23, 2015) – Iconic entertainer Brenda Lee dashes to the top of the charts with “Rockin Around the Christmas Tree” at No. 1 on Billboard’s Country Streaming Songs and hits the top forty on the Billboard Hot 100 for the first time since 1961.

Most recently, “Rockin’ Around the Christmas Tree” remained at No. 1 on the Billboard Holiday Airplay charts.

“It’s amazing how that song continues to resonate with every age
group and just about everybody. I was just a kid when we recorded
‘Rockin Around the Christmas Tree’ and it makes me feel so good knowing
it still brings Christmas joy to others,” Lee said.

The Country Music Hall of Famer recorded “Rockin’ Around the
Christmas Tree,” written by Johnny Marks (“Rudolph the Red Nosed
Reindeer,” “A Holly Jolly Christmas”), when she was 13 years old. The
tune was originally released in 1958.

Lee, who celebrated her 71st birthday Dec. 11, is enjoying the
holidays at her Nashville home after performing for a packed crowd
during the Country Music Hall of Fame and Museum’s Deck the Hall concert
series.

Known as “Little Miss Dynamite,” Lee has sold more than 100 million
records worldwide and charted in more categories – including pop, rhythm
& blues, rock, easy listening and country – than any other women in
the history of recorded music. She’s been inducted into the Country
Music Hall of Fame, Rock and Roll Hall of Fame and Rockabilly Hall of
Fame.

Lee can belt out rockabilly, country and pop standards with equal
conviction with the kicking, countrified upstart of “Jambalaya” and
“That’s All You Gotta Do,” the pert, jaunty rocker of “Sweet Nothin’s”
and “Let’s Jump the Broomstick,” the heartbroken balladeer of “I’m
Sorry” and “Break It to Me Gently,” the sophisticated songstress of “I
Just Want to Be Wanted” and “You Can Depend on Me,” and the country
storyteller of “Big Four Poster Bed” and “Nobody Wins.”