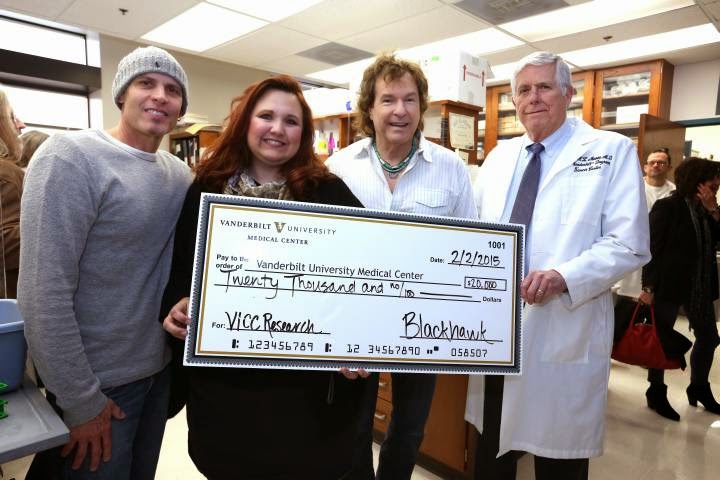 BLACKHAWK PRESENTS $20,000 CHECK TO NASHVILLE’S VANDERBILT-INGRAM FOR CANCER RESEARCH
Annual donation brings grand total to $100,000 raised on behalf of late bandmate Van Stephenson
Nashville, TN – February 13, 2015 … One of country music’s most loved groups, BlackHawk,
has once again raised funding for Nashville’s Vanderbilt-Ingram Cancer
Center on behalf of the Van Stephenson Memorial Cancer Research Fund.
BlackHawk’s two surviving founding members – Henry Paul and Dave
Robbins – presented their annual donation to the hospital in honor of
their third bandmate Van, who died from melanoma skin cancer in 2001.
The latest donation brings their total to $100,000 raised for
Vanderbilt-Ingram’s research lab since 2006.
“The
funds that BlackHawk has raised and donated have made a real
difference in our ability to accelerate research and provide better
treatments for patients with malignant melanoma,” says Dr. Hal Moses,
director of the Frances Williams Preston Research Laboratories at
Vanderbilt-Ingram Cancer Center.
In addition to their
check presentation, Henry and Dave, along with current guitarist and
vocalist Randy Threet, also visited with staff and patients throughout
the hospital, performing some of their hits from their career to help
bring a smile to their faces. “We want people to know that we are
thinking about them and we have been affected by the disease as well
with our loss of Van,” says Henry. “Sometimes music is a very uplifting
distraction from the crazy reality of battling a deadly disease.”
“The
older we get, the more people we know – friends, family members and
fans – are being touched by cancer in some way,” Dave adds. “It’s just
amazing how many people are affected by cancer. That’s one reason why
this is so important to us.”
Before Van passed
away, he asked for two things: for BlackHawk to continue making music
for years to come and for his bandmates to do what they could to find a
cure for cancer. “By doing this every year, we get to live up to our
promise to Van to help find a cure for cancer and to make sure
BlackHawk survives day after month after year,” says Henry. “It has a
very personal connection for us. We all have a job in this life, and
this is ours.”
BlackHawk became a
multi-platinum-selling trio in 1993 with the release of their
self-titled debut album which spawned the Top 10 hit “Goodbye Says It
All,” “I Sure Can Smell the Rain,” “That’s Just About Right” and the
chart-topping “Every Once In A While.” Five more albums and several
more hit songs would follow in years to come including “I’m Not Strong
Enough to Say No,” “Almost a Memory Now” and “Postmarked Birmingham.”
Their latest album, Brothers of the Southland, was released last July. The project marked the band’s first studio album in 12 years.