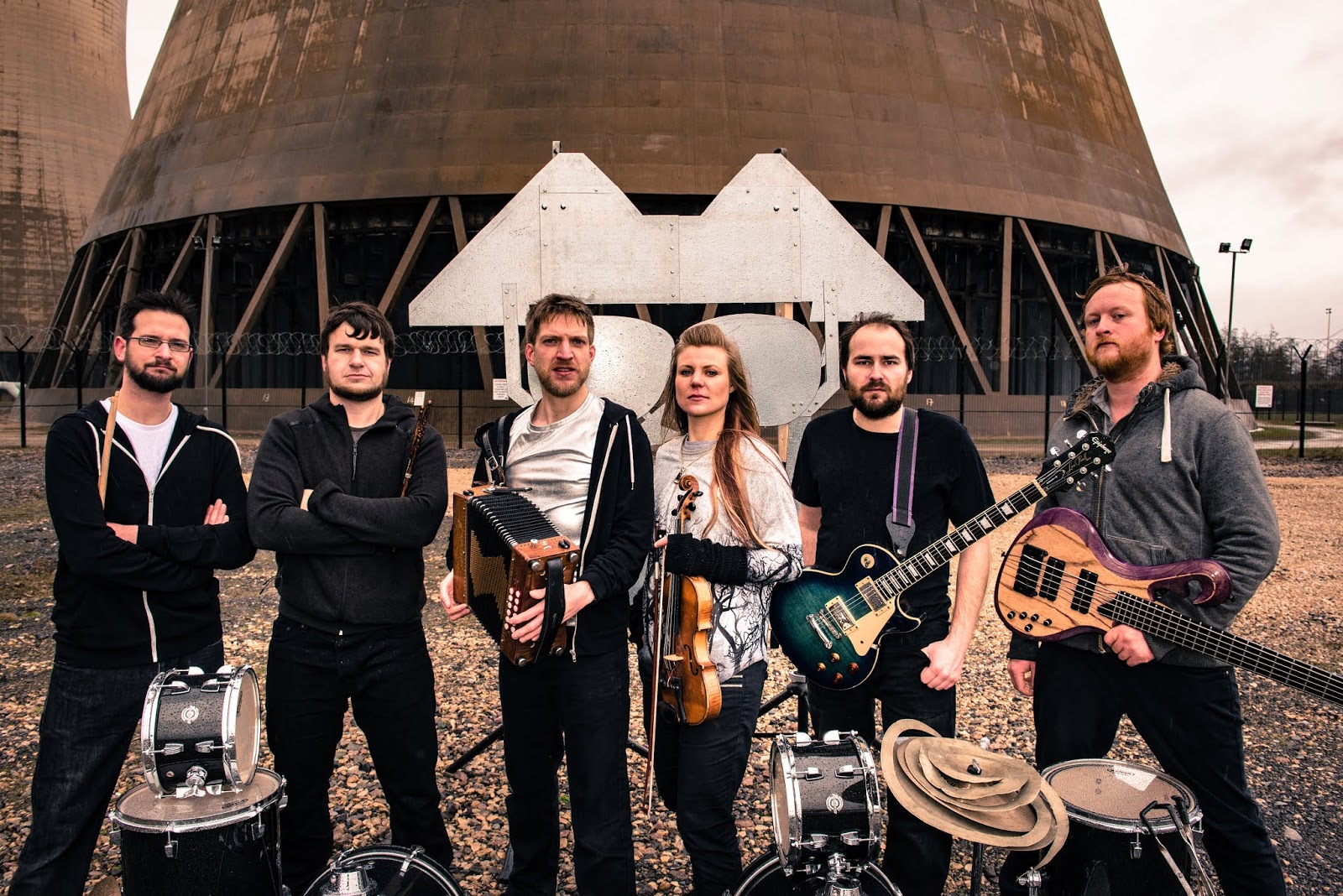 Answer:  We‘re a six piece folk-rock band from the
North East of England. We mainly play traditional English folk songs and folk
tunes, but give them a heavy rock arrangement influenced by bands like Rage
Against The Machine, Tool and Iron Maiden. We also write some of our own songs
and instrumentals in a traditional style.

Answer:  In April 2018 we released an EP called
Leviathan! There are three songs on the CD that explore different aspects on
the whaling industry which was at its height in the 18th and 19th centuries.
The traditional folk song The Diamond was a rallying cry for whalers and
documents the excitement of setting out on a whaling voyage. Leviathan! was
written by our singer Stuart Giddens and depicts an adrenaline fuelled
whale-hunt based on a real account. The EP closes with another traditional
song, Weary Whaling Ground, which shows the full gruesome horrors of the whale
trade. The songs are complemented by two instrumentals penned by our fiddle
player Laura Boston-Barber. The EP’s short-form lends itself well to pursuing a
single narrative strand across several tracks, and we’re proud that it’s a
lean, slick piece of story telling. We recorded it in the studio over a
fortnight with our producer Dave Boothroyd and we love how strong and full it
sounds. It’s our best record yet.

Answer:  We always begin with traditional folk music.
We actively participate in the UK’s thriving folk scene, and we pick up songs
and tunes from other players in pub music sessions or in written collections of
folk music. When we write our own music we try to choose themes and structures
that will complement the traditional music so as not to be jarring for the
listener. Once we have the raw material, we head to the rehearsal room and
build the arrangement – each adding our own influences from roots and world
music, to rock and heavy metal.

Answer:  For the first time we introduced two full
drum-kits to the band. Before that, percussion was played on djembe and cajon.
It’s created a much fuller sound, pinned down by interlocking drum grooves and
heavy bass lines. It’s louder and rockier than ever before but is the best
realisation of our musical vision and the best demonstration of our musical
influences.

Answer:  The Bonny Ship the Diamond is a traditional
whaling song that’s been sung by many folk bands in the UK, Ireland and further
afield, most notably by The Corries. It’s a kind of recruitment song, and we
emphasised this aspect in the arrangement – there’s a driving military-style
drum line that runs through the song. From there, the arrangement really built
into a four-to-the-floor dance number and it’s quickly become a favourite with
audiences when we play it live. We shortened the song‘s name to simply ‚The
Diamond‘. We created a music video for the track too which you can find on
YouTube. In the video we playing in the dark with the outline of our bodies
simply outlined by neon lights. It’s a really fun effect!

Answer:  We have complete creative control. We do not
have any management or a record label. We are completely independent. It means
a lot of work – arranging all recording, touring, promotion and booking
ourselves – but we love the freedom it allows us.

Answer:  Most of our fans are totally mad, and we
seem to inspire real devotion. Because we are named after Blackbeard our fans
often appear at our gigs dressed up as pirates. We’ve even been invited by fans
to play gigs on pirate ships and at pirate themed weddings. Some fans even take
it one step further, dressing up as characters from our songs. Notably, one fan
appeared at a gig dressed as The Steam Arm Man, a gothic character with one arm
built from leather and steel pipes!

Answer:  We love to play live. We began our careers
busking on the streets of our home town York, and we’ve always thrived on
instantaneous audience reaction. We love to make audiences dance, laugh and
cheer. As we’ve grown, we’ve had the opportunity to play on larger and larger
stages, and our show has become more and more theatrical. Our recent festival
run included huge metal structures on stage, sychronised dance moves, a light
show and a number of outfit changes.

Answer:  With every CD we realease our music grows
and changes organically, and our stage-show grows too. We’ve been together
almost 10 years, but we’re still becoming more confident in our sound, and
defining a sound which is truly distinct from other bands in this genre. It’s
exciting to have a big back catalogue to choose from when we write a set-list
too, and we love re-interpreting songs from earlier in our career. I think if
we weren’t growing and trying new things creatively all the time, we would
quickly become jaded with what we do. Taking our music beyond its current
borders is really what we thrive on.

Answer:  Hard work, confidence and a lot of
self-belief have always been our core principles. We’ve never been blessed with
good industry connections, or family who are established in the genre, so the
music and the show have to be the driving force for success. We try to put on a
really exciting stage-show, play as many gigs as we can and hope that the music
speaks for itself.

Lamitschka:  What’s unique about you that will
differentiate you from other artists?

Answer:  We never hold back when it comes to wearing
our rock influences on our sleeve. We take it further than most folk-rock bands
with driving riffs, distorted guitars and heavy drums. Our brand of folk-rock
could never be described as ‚twee‘.

Lamitschka:  Who is your biggest critic, yourself or
others?

Answer:  Definitely others!! We never lack a bit of
self-belief. Because of the loud, rocky nature of our music it can be very
divisive, especially amongst the standard folk crowd, and we’ve recently heard
criticism that we take it too far. I think it’s important for us to pursue our
own artistic vision, and, secretly, we enjoy the fact that our music isn’t for
everyone: we would much rather be loved and hated in equal measure than to be
thought of as ‚nice‘.

Answer:  Unlike lots of bands who’ve been together
for nearly a decade, we consider each other firm friends and we spend time
together even when we’re not playing music. We love to meet up to share food
and beers, often barbecues or our famous Blackbeard’s Christmas Dinner.

Lamitschka:  What can your fans expect to see when
they see you in concert?

Answer:  There will be a spectacle on stage. We’ll
always do at least one thing totally unexpected. And you will dance!

Lamitschka:  Do fans mob you everywhere you go or do
they respect your privacy?

Answer:  One thing that’s great about the folk scene
is there’s plenty of interaction between fans and artists. If we are playing a
festival over a few days, we will always ask to camp with ticket-holders,
rather than being put up in a hotel. Our fans are so much fun, so we love
having the opportunity to meet them and find out more about them.

Answer:  We have a website www.blackbeardsteaparty.com where
you can view our gigs listings, buy our music and find out more about the band
and each member. We’re also very active on Facebook.

Lamitschka:  What’s the best compliment a fan has
ever given you?