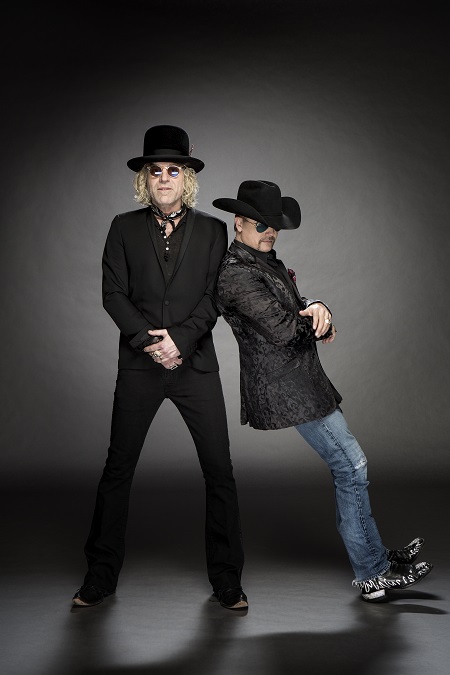 NASHVILLE, TENN. (May 9, 2017)
– The CMT Music Awards just announced their finalists, and energetic
country duo Big & Rich have scored a nomination for “Duo Video of
the Year,” with “Lovin’ Lately,” guest starring Tim McGraw, who is also
featured on the track. Big & Rich’s fan nation, dubbed the FREAK
PARADE, can vote for “Lovin’ Lately” HERE. The Charles Esten hosted spectacle will air LIVE on June 7 at 8:00pm ET, where all of the winners will be revealed.

Big & Rich’s latest single, “California” continues to turn heads,
after recently storming into the Top 40 at country radio.The song’s
brand new video made its broadcast premiere earlier this week on CMT,
where it was aired on the hour for an entire day. Fans can watch the
full adventurous video, which is now available worldwide HERE. The track serves as the lead single from the upcoming album Did It For The Party,
set for release later this year. The single and album will also be
promoted at Walmart® stores nationwide, after the newly announced
partnership with TWIX®. “California” is available on iTunes, Spotify and wherever music is sold.

The CMT Music Awards nomination comes on the heels of a
career-defining year, which saw the dynamic duo scoring their third
back-to-back Top Ten record on country radio with the award nominated
smash “Lovin’ Lately” featuring Tim McGraw. Since launching Big &
Rich Records, the larger-than-life pair continued to soar to new heights
with their previous project Gravity, after achieving consecutive back-to-back Top Ten hits for the first time in their 13 years together.

About Big & Rich:
Big & Rich is comprised of Big Kenny and NBC’s “The Celebrity
Apprentice” winner John Rich. The multi-platinum hit duo have garnered
multiple Grammy, ACM, CMA and CMT Music Award nominations. Their
previous release, Gravity helped propel them to new heights, producing
three back-to-back smash hit singles with “Look at You,” “Run Away With
You,” and “Lovin’ Lately” featuring Tim McGraw. The Country superstars’
first studio album, Horse of a Different Color, includes their hit
infectious single, “Save a Horse (Ride a Cowboy).” Other hits include
“Comin’ to Your City,” “8th of November” and their No. 1 hit, “Lost in
this Moment.” Meanwhile, “Comin’ to Your City” is nearing a decade as
the theme song for ESPN’s “College GameDay.