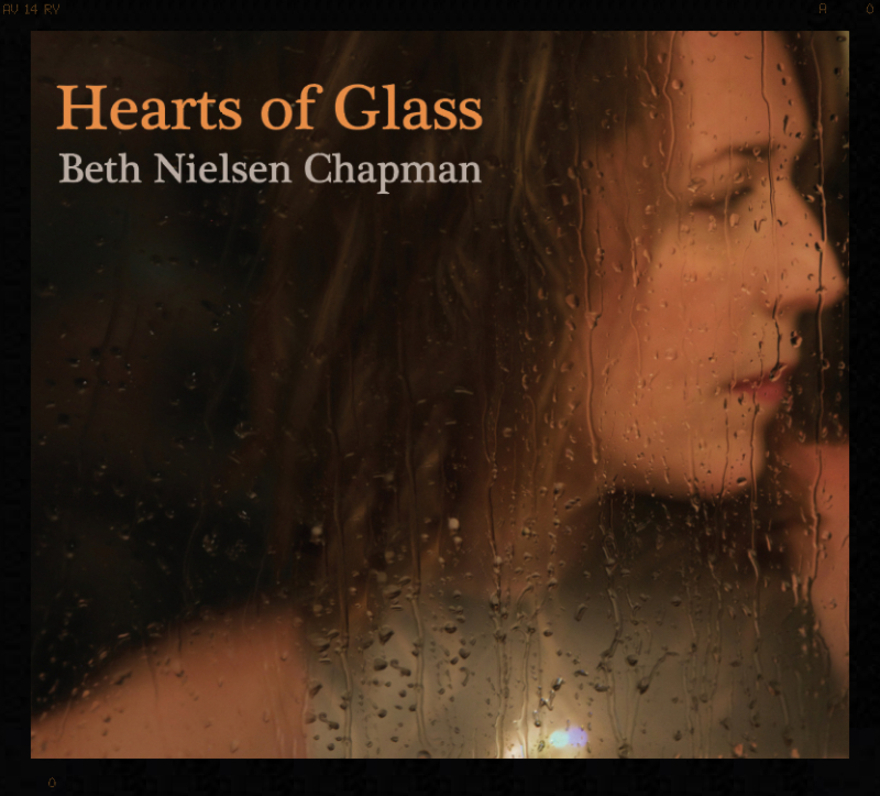 (NASHVILLE, TENNESSEE) March 6, 2018 – Hearts of Glass, a beautiful new album by Beth Nielsen Chapman,
will be released in the United States on April 27. The celebrated
songwriter issued the project in the United Kingdom in February prior to
a four-week tour there.

Chapman also includes on the record a pair of early songs recorded by
Waylon Jennings (“Old Church Hymns & Nursery Rhymes”) and Willie
Nelson (“If My World Didn’t Have You”). Rodney Crowell provides
background vocals on “If I Didn’t Have You,” and Ruby Amanfu sings on
five of the album’s 11 tracks. Hearts of Glass is Chapman’s 13th studio album and her first release since her 2016 induction into the Nashville Songwriters Hall of Fame.

Although Chapman has been making records since 1980 with many top
producers, Hearts of Glass marks the first time in a long time  she has
not been at least a co-producer. Inspired to create an album with
clarity and space, in the same vein of the Civil Wars, Chapman contacted
Charlie Peacock, their producer. Peacock embraced her vision. However,
when their schedules did not align, Peacock set up an introductory
meeting with his son and fellow producer, Sam Ashworth. After initial
conversations with Ashworth, Chapman felt confident that this
partnership would work and turned production completely over to him.

For Hearts of Glass, Chapman refreshed five songs that have
appeared on her past albums: “Rage on Rage,” “All for the Love,” “Child
Again,” “Life Holds On” and “Dancer to the Drum.” Ashworth approached
the new recordings with minimal touches of production, occasionally
moving the accompaniment from piano to acoustic guitar. The spare
arrangements are especially effective on poignant songs like “Epitaph
for Love.” Meanwhile, “You’re Still My Valentine” provides a unique dip
into the complexities of deep lasting love.

“Creatively this was an interesting new dynamic for me,” Chapman says.
“Handing over so many of the decisions and trusting the process, while
trying to quiet my inner control freak. By doing so, I ended up, not
only with something I loved, but I learned a lot about myself and the
places you can go when you let someone else drive.”

Ashworth and Chapman  also worked together as songwriters on the
jubilant “Enough for Me.” In addition, she collaborated with Graham
Gouldman (of 10cc) and Nashville songwriter Kevin Montgomery on the
inviting lead track, “Come to Mine.”

Her impressive songwriting catalog includes “Down on My Knees” (Trisha
Yearwood), “Five Minutes” (Lorrie Morgan), “Happy Girl” (Martina
McBride), “Here We Are” (Alabama), “Nothing I Can Do About It Now”
(Willie Nelson), “Strong Enough to Bend” (Tanya Tucker), and “This Kiss”
(Faith Hill).

As a breast cancer survivor, speaker on grief and creativity, and a
teacher of songwriting, vocal, and creativity workshops, Chapman, in
addition to her concerts, has delivered deeply moving and inspiring
keynotes at various conferences. Her stories and delivery illustrate the
healing power of music, as she weaves her music into this theme,
opening every heart to experience how resilience is fueled through
creativity. That is the clear focus in her presentations as she deems
herself a “creativity whisperer” with a passion for inspiring others to
fully blossom into their creative life.