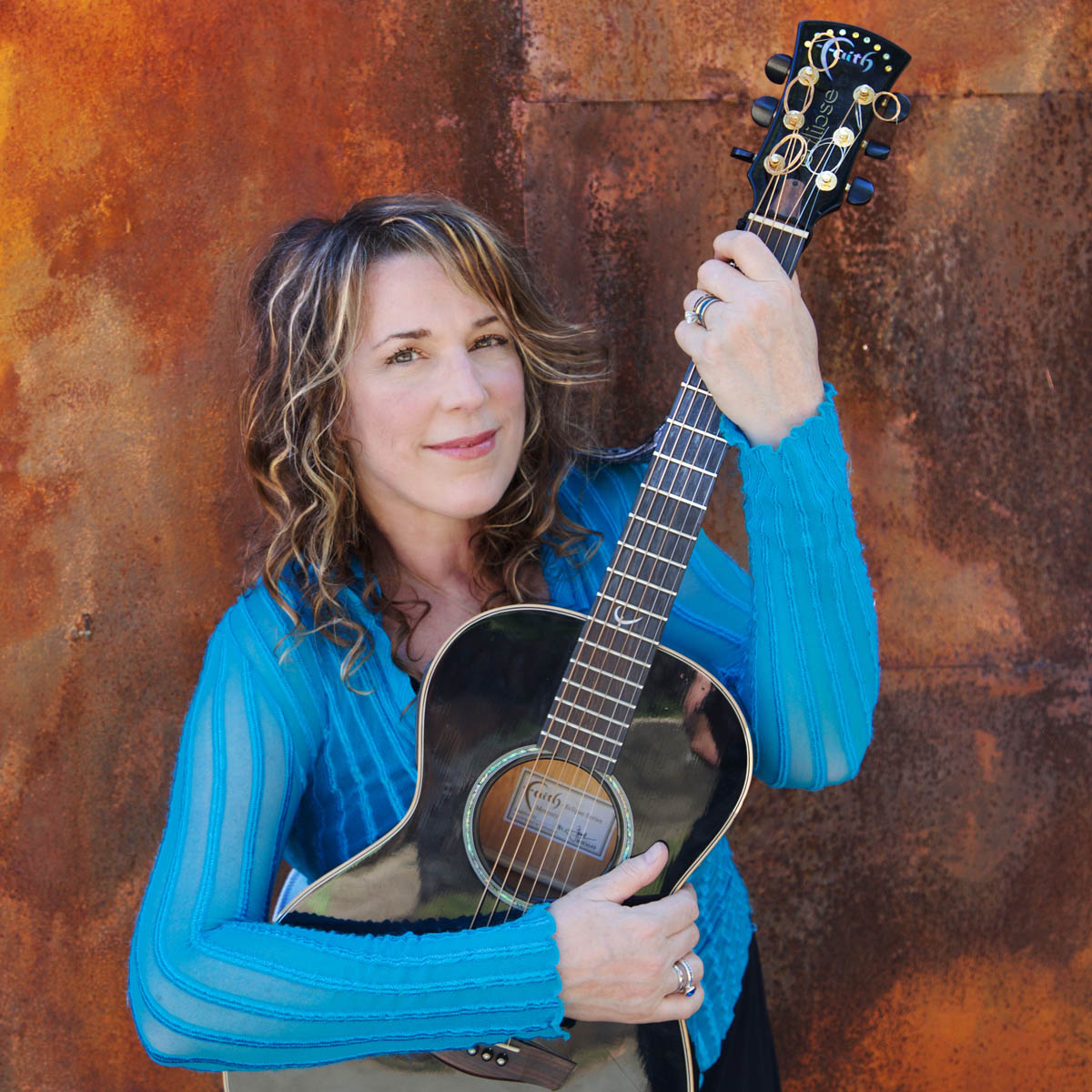 Lamitschka: How would you describe yourself and
the music you play to someone who has never seen or heard you?

I would describe my
musical taste as “melting” pot from all the influences and cultures that I have
been exposed to from my childhood growing up in a military family, moving
around every couple of years. Add that in with growing up in the 60s when radio
was very diverse and of course I got a good hit from my parents record
collection which included all the great masterful songwriting of the 30s and
40s. Then really coming of age in the 70s with all the singer-songwriter
swirling about was such a rich time to be immersed in so much great music. I
have always had a hard time picking one category to exist in, so my songs range
pretty widely in terms of the style but I do believe a great song can adapt to
any style of production or presentation.

This last year was
very challenging for me as my husband was diagnosed with leukemia in August and
we spent the whole month of August with him in critical care. Fortunately he is
doing very well now and is expected to make a complete recovery. In the midst
of all that I was finishing this record and trying to get it out into the world
but as life stuff has a tendency to do it created quite detour! So I would say
the highlight of the year for me was getting through all of that and finding
out that he was in remission and early fall. It’s remarkable to me how grateful
one can feel after coming through a difficult time…just to be grateful for
life to go back to normal actually!

My latest release
called “hearts of glass“ has been doing great! It is coming out in the US in
late April and has done really really well in its release in the UK where I am
now touring for the next several weeks. The reviews have been wonderful so far!

Lamitschka:  How did you choose the title for the
CD?  Is there a story behind the name

The title of the CD “hearts
of glass” came from a line in one of the songs called “epitaph for love”.   “ diving headlong off the overpass with our
hearts of glass for love”.   It felt that
all the songs on this collection really captured that essential space between
vulnerability and straits that I think we all inhabit within our hearts.

Lamitschka:  Please tell us about the songs on
your album (influences, etc).

The songs on this
album or a mix of new songs and a few old favorites of mine that I have always wanted
to re-visit with very sparse production.I was inspired to make this album very
sparse in production because I really enjoyed the work of the group called “the
civil wars“ and I sought out there producer Charlie Peacock who was actually
originally going to make this record with me when his schedule changed suddenly
and I ended up having his son Sam Ashworth produce the record. Sam is extremely
talented and actually came by the suggestion of Charlie.

Lamitschka:  What is the difference between your
last CD and your current one?

My last CD “UnCovered“
was a collection of songs that I had written for other artists that were hits
for them–songs which I have never recorded myself including such compositions
as “this kiss” which was the number one hit for Faith Hill, “nothing I can do
about it now“ which was a #1 one hit for Willie Nelson, and several others.

My new CD“Hearts of Glass“ is a collection of new
songs and a few old gems that I dug out which I have always wanted to re-create
in a more sparse setting.

I like to record all
kinds of songs I don’t really have a favorite. I have done quite a bit of
diverse styles over the years including a children’s album on astronomy called
“the mighty sky“, a collection of old ancient Latin hymns called “him his“, and
a double CD song in nine different languages from various cultures and paths of
faith called “prism”.  I just follow what
inspires me at the moment.

Answer: I have had some
wonderful feedback from fans over the years from my music. Some letters and
emails have been very moving to me. One in particular was from a man who had
lost his wife 10 years before and he had pretty much stopped living… He wrote
to tell me that he heard the song “sand and water“ on the radio and went out
and bought a CD player and a CD and took it home and over the weekend listen to
it over and over and cried and cried. My favorite part of the letter was the
last sentence where he said “and Monday morning I put the CD away and I started
to live my life again.”

Lamitschka:  What do you think about today’s
music scene versus its past and where do you see it going in the future?

Answer: Well I believe
creativity and musical expression is alive and well, while it has been a very
difficult era since Napster came along and gutted the music industry, the
creative expression of individuals writing songs and making music has never
lost its value although I think it’s much more difficult now for those
struggling up-and-coming musicians to find a way to make a living which is
absolutely unacceptable to me.

Lamitschka:  What do you think about today’s
music industry?

Answer: I think today’s music
industry is still in recovery mode and unfortunately I believe it is still a
bit of land grabbing that prays on the creative class but I am hopeful with
some of the new technology that we will see more transparency which is really something
that each creator is owed. To be able to track where ever there material has
gone and who has benefited from it’s out reach. And mostly to be fairly
compensated for their work which so enriches the lives of many and fills the
pockets of those who are the gatekeepers.

Lamitschka:  If you had the chance to change
something about the music industry, what would it be?

Answer: If I could change one
thing about the music industry it would be to create transparency so that
everyone could see what everyone is doing and we could all thought on the side
of fairness.

Answer: My favorite activity
is the moment that I finished a new song after what is usually many many hours
of work to try to make it right. There is a sacred moment before anyone else
has heard it when I really enjoy feeling of accomplishment and centeredness
like no other.   A close second to that
is the joy that I have in performing and feeling the love from an audience
enjoying the work that I have done.

Answer: I actually work very
hard to avoid being driven. I find it’s a lot more fun just to float!

I actually work very
hard to avoid being driven

I was inspired to be
an artist by all the artists that inspired me.

Lamitschka:  When you get time off, how do you
like to relax?

Answer: When I have time off I
love to relax doing other forms of art such as painting or jewelry making and
of course number one on the list is playing with my little grandson who is just
turning five.

Lamitschka:  When you’re on tour, do you have
time to play tourist?

Answer: When on tour I always
try to find something local wherever I am. I really enjoy being in the UK where
there are still so many small businesses and restaurants run by families which
is very rare in America now. I’m not a fan of chains and global brands as much
as finding something really unique from a local when I’m in the area.

Answer: My website is
bethnnielsenchapman.com and I have everything there -all the information etc.
about what I’m up to!

Lamitschka:  What’s your favorite song that you
wish you could have recorded?

Answer: There are so many it’s
hard to pick one… But I think one of my favorite recordings I’ve ever heard is
“song of Bernadette” by Jennifer Warnes. If I were to record this myself I’m
afraid I would be just trying everything I could to do it exactly the way she
did it which is perfection.

Lamitschka:  What message would you like to send
your European fans?

Answer: I would say to my
European vans I am trying to get there! I would love to tour there much more
than I do and I’m looking for ways to do that!

Lamitschka:  Fans are always hungry for good road
stories. Do you have one you can share with us?

Answer: I love riding on
trains so whenever possible I leave the band to drive to the next gig and I
jump on a train. And this one particular instance I was putting superglue on my
fingertips because playing the guitar with my fingers was really painful. Just
as I got the superglue have to dry the train stopped at the station that I was
meant to get off on and I was ill prepared to be ready to get off the train in
time for the door to close again. I jumped up and tried to grab my guitar and
computer etc. but my fingers have gotten stuck to the inside of my purse which
was very pathetic and now I left but at the moment I was quite panic stricken
of course I did miss my train stop and had to go several miles out-of-the-way
get off the train in the middle of nowhere and switch back to get back to where
the gig was. My road manager just looked at me and sighed.

Lamitschka:  Describe what a perfect day is like
for you.

Answer:A perfect day for me is to get up and
meditate and drink a cuppa coffee and go for a walk in nature and come back
home and make a lovely brunch and spend some time writing and in the afternoon
go pick up my grandson and take them to the playground and then come home and
cook a fabulous meal for my husband.