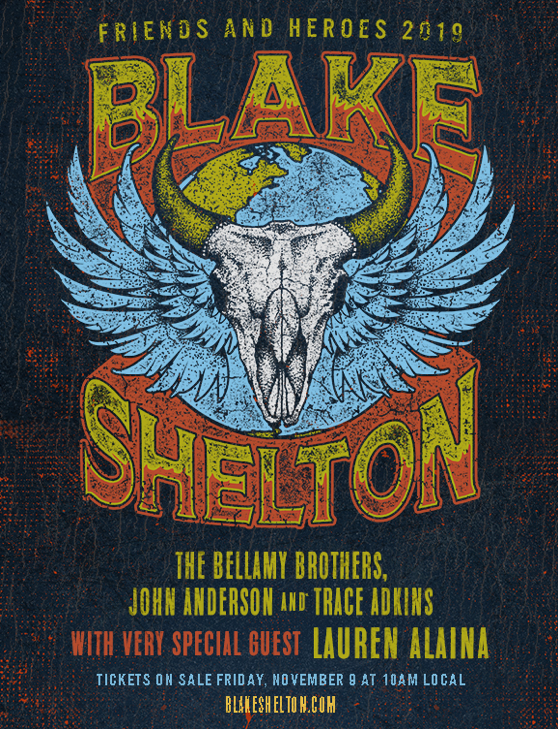 From his team members on The Voice to veteran country artists, Blake Shelton
has a history of demonstrating his support for the people in whom he
believes; when he realized that fans across the country needed to hear
music from his friends and heroes, he decided to bring them all out on
the road. “Friends & Heroes 2019” will kick off on February 14 in
Oklahoma City, Okla. and will span 18 dates across the country (full
list below). Very special guest Lauren Alaina joins Shelton for the run
along with special appearances by country icons the Bellamy Brothers,
John Anderson and Trace Adkins.

“I’m really excited about my tour because it’s taking where I came from
and the music I listened to growing up, and actually introducing it to a
whole new audience,” Shelton said. “I feel like a lot of people might
know the Bellamy Brothers’ and John Anderson’s music, but maybe they’re
not familiar with who they are as artists. I think that this is going to
be a great opportunity for the country music fan base to be
re-introduced to these guys and, selfishly, I’m just excited to share
the stage with them! It’ll be great to have Trace back out on the road
with us, and I can’t wait for one of my newer friends and heroes, Lauren
Alaina, to blow these crowds away.”

VIP experiences will be available throughout the 2019 tour with premium
perks ranging from a great seat on the floor to exclusive merchandise.
The BS’ers VIP Lounge will also return, including the opportunity to
pose in Shelton’s chair from The Voice, plus he will play a private acoustic set in select cities. Blake Shelton VIP Experience details are available HERE.

In addition to “Honky Tonk Ranch,” the Bellamy Brothers recently
released their autobiography “Let Your Love Flow: The Life and Times of
the Bellamy Brothers.” Autographed copies of their book are available
EXCLUSIVELY at honkytonkranchtv.com. Special bundle prices also available when purchasing their book and 40th Anniversary 2-Disc CD set.

Country Music Association’s 2012 “Entertainer of the Year,” five-time
Male Vocalist of the Year winner and GRAMMY nominee Blake Shelton
continues to add to his superstar status. His most recent album Texoma Shore became his sixth record to debut at No. 1 on the Billboard Top Country Albums chart and marked his 11th all-genre Top 10. Texoma Shore
features tracks including “I Lived It” and “I’ll Name The Dogs,” a
romantic tune that boasts more than 115 million streams and marked his
25th No. 1 song. His current hit, “Turnin’ Me On,” is the project’s
third single and was most-added upon impact at country radio. In the
week following album launch, Shelton became the first artist in Country
Aircheck / Mediabase history to have six songs chart simultaneously. Texoma Shore follows 2016’s Gold-certified If I’m Honest,
the best-selling country album release of the year, which spawned three
chart-topping songs and earned him a No. 1 on both the Billboard Top
Country Albums and the all-genre Top Album Sales charts.

A member of the Grand Ole Opry, Shelton has earned a host of honors
throughout his career including 20 ACM nominations and both the male and
overall Video of the Year trophies at the 2018 CMT Awards. As a coach
for the Emmy Award-winning television show The Voice, Shelton
is a six-time champion, most recently with his contestant Chloe
Kohanski. Off stage, Shelton has teamed up with Ryman Hospitality to
open a string of Ole Red entertainment restaurant venues, a nod to his
2001 hit of the same name. The first location in his hometown of
Tishomingo, OK opened in September 2017, while the space on Nashville’s
lower Broadway hosted a week-long grand opening in June of 2018.
Locations in Gatlinburg, TN and Orlando, FL are due to follow.

Georgia native Lauren Alaina captured America’s hearts when she competed
on Season 10 of American Idol. In 2017, Lauren followed up her No. 1
debuting first album, Wildflower, with the release of the
critically-acclaimed Road Less Traveled. The album landed on multiple
end-of-year “Best Of” lists including Billboard, Rolling Stone and
Amazon, and it became the top-streamed female country album release of
the year. Praised as “full of life lessons and uplift” (PEOPLE), the
collection of 12 songs all written by the young star includes Lauren’s
first No. 1 hit, title track “Road Less Traveled.” The “sassy Southerner
with killer pipes” (PARADE) has shared the stage with superstars
including Jason Aldean, Alan Jackson, Carrie Underwood, Luke Bryan and
Martina McBride. Lauren recently joined Cole Swindell and Dustin Lynch
on the Reason to Drink Another Tour.

Lauren is this year’s ACM New Female Vocalist of the Year and performed
on the Apr. 15 broadcast live from Las Vegas. She was also nominated for
ACM Vocal Event of the Year for “What Ifs,” the double-platinum-selling
No. 1 collaboration with her childhood friend, Kane Brown. Lauren is
one of CMT’s Next Women of Country and she received her first CMT Music
Award for Breakthrough Video of the Year with her No. 1 smash “Road Less
Traveled,” This year she received her second CMT Music Award for
Collaborative Video of the Year, with Kane Brown.  In addition to
performing on the 51st Annual CMA Awards, 2017 saw Lauren earning
nominations for CMA New Artist of the Year, several Teen Choice Awards
and Radio Disney Music Awards. In 2018, Lauren is again nominated for
CMA New Artist of the Year, and is the reigning Breakout Artist of the
Year for the Nashville Business Journal. Her current single, “Ladies of
the ‘90s” is at country radio now.

The story of John Anderson is the true-to-life, yet larger-than-life,
saga of one of the most dramatic career turn-arounds of the 1990’s.It’s
the story of just reward for a singer who originally took country music
by storm and helped keep it true to its roots back in the early ’80’s.
His memorable hits from that musical era included “Wild and Blue,” “I’m
Just An Old Chunk Of Coal,” “1959,” “I Just Came Home To Count The
Memories,” “Black Sheep” and “Swingin’.”   “Straight Tequila Night,” the
lead-off single from 1992’s Seminole Wind went to number one
across the board on every country chart, and spawned another run of hits
in the decade to follow such as  “Money In The Bank,” “I’ve Got It
Made,” “I Wish I Could Have Been There,” “Let Go Of The Stone,” “Bend It
‘Til It Breaks,” “Mississippi Moon” and “Somebody Slap Me.” John
Anderson… an influence to many of today’s country artists, a colorful
character and truly a country music treasure!

Towering baritone Trace Adkins has sold more than 11 million albums and
charted more than 20 singles in his 25 years in Nashville, a remarkable
run for one of country music’s most easily identifiable stars. The
Louisiana native recently released his 12th studio album, Something’s Going On,
on BBR Music Group / Wheelhouse Records. A three-time GRAMMY Award
nominee, Adkins has won three Academy of Country Music Awards, including
the 2009 Single of the Year Award for “You’re Gonna Miss This” and
Vocal Event of the Year with Blake Shelton for “Hillbilly Bone” in 2010.
The Grand Ole Opry member is also an author and spokesman for the
Wounded Warrior Project and The American Red Cross, for whom he raised
more than $1.5 million dollars as winner of NBC’s All-Star Celebrity Apprentice. In recent years, Adkins has performed for our service members across 12 USO Tours. In his 2007 autobiography, A Personal Stand: Observations and Opinions from a Freethinking Roughneck,
Adkins recounted his rise to fame, brushes with death, and battles with
personal demons. Adkins has also acted in multiple films and television
shows, playing a tough-as-nails biker in The Lincoln Lawyer (starring Matthew McConaughey), a desperate father in Deepwater Horizon (starring Mark Wahlberg) and a wise oracle of a tattoo artist in the family friendly film Moms’ Night Out
(starring Patricia Heaton, Sean Astin, Sarah Drew). His most recent
role was that of MercyMe’s real-life manager, Brickell, in the box
office smash “I Can Only Imagine.” The film was the third biggest
selling movie on its opening weekend in America. For tour dates and more
information, visit www.traceadkins.com or on Twitter, Facebook and Instagram @TraceAdkins.