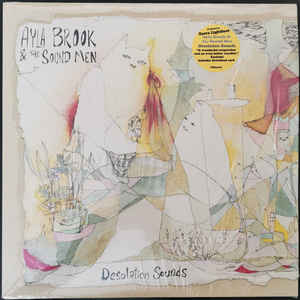 “Lift You Up”, begins the
album with a lone keyboard. Its soft tone really gets you set as Ayla’s vocals
come in. It opens the album showing off their vocal and lyric talent. It really
gives you that desolate feeling, I assume which reflects the winters in Canada.
That lasts the first 39 seconds of the song, and just when he says, “Lost in
desolation’s sound,” he’s painted that picture across the cold winds, snow and
the small town. Then the Sound Men come in. First, a set up hard chords mixed with
the light keyboard. Then, the drum beat kicks-in, and the tempo picks-up to
almost hard classic rock.

From that introduction alone, I knew
in which direction I had to head next, “Cheap Microphone & an Old Guitar.”
Because that first track didn’t sound like an old microphone or cheap
guitar. But I wasn’t let down the intro riff was really rough, and the
microphone sounded like it came from the 40’s or 50’s. The song itself is “old
town rock & roll” with the background vocals and everything. I’m sure this
song gets the crowd moving. It’s got a hard-fast drumbeat and a tempo that
reminds me of “Johnny B. Goode” by Chuck Berry or any Stray Cats tune. It’s a prime
example of rockabilly.

“Floated So Far”, has a
beautiful keyboard and an acoustic guitar opening. The tempo picks up a
bit when Kimberly Macgregor’s vocals come in. The song is a showcase of the
bands range of genres. The layover of her vocal tracks just adds to the allure
and enchantment of the lyrics. It’s almost as if a siren is singing from the
vast emptiness of the Canadian parries.

The album ends with “Who Are You.” Opens
with some slow guitar picking and some reverb. This song is a softer sound than
the rest of album. The vocals almost sound like an eerie echo. There is a very
deep bas riff that’s joined by the picking of what sounds like a steel guitar.
The background vocals and humming just add that almost eerie sound. The entire
tune is run through reverb, but that’s the magic of it.

This is definitely an album that is
worth a listen maybe a buy.  I’d
recommend it. The production quality is amazing, the showcase of talent is
rarely seen, and the lyrics are pure poetry. I didn’t know what I was going to
get when I picked this up, but I’m fortunate I did.