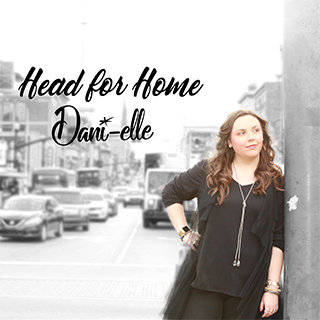 “I knew that I had to release “Head for Home” as the next single from
the EP “Runnin’ On Dreams” because I just know it is a song that so many
people are going to be able to connect to on so many levels,” reflects
Dani-elle Kleha. “I am all about making as big of an impact as I can
through my music, and I hope that this song does just that.”

“Dani-Elle’s plaintive vocals drive this soul-searching ballad and truly
evoke the deep questions to the listener,” expressed produced, Chip
Martin. “Her obvious experience and pain is clear and present, and
resonate straight to the heart.”

“Head For Home” is a heartfelt song that everyone of any age can really
relate to. This is one of those songs that flowed out during the writing
process. In every person’s life there are ups and downs and the lyrics
of this particular song defines how we all go through the process.
Dani-elle and her mom were hit by a drunk driver in a car accident and
she still has a tough time dealing with the emotions from that.  Sitting
at the piano one day the thoughts started flowing from the accident. No one thinks they will be in a terrible accident or thinks about having to figuring out how to deal with the mental challenges one endures. The answer is really about surrounding yourself with the right people and simply “Heading Home” to regroup. Dani-elle wanted this to be a message of knowing it’s alright to not be ok all of the time and a strong reminder that you are not the only person who goes through it. whether it be a breakup, loss of a loved one or just dealing with life.  The song has had a great connection with her Positive Youth Tour in a powerful way that only music can. The goal is to change a lot of lives and touch many hearts with this song.

Dani-elle continues to promote her last single “Get Back Up” released in April 2018, a song that inspired her Positive Youth Tour,
a series of live shows performed at schools in Pennsylvania’s
Lackawanna and Susquehanna counties, where the concerts include segments
during which Dani-elle speaks to students about following their dreams,
bullying, and self-worth.

Dani-elle Kleha is an aspiring, performer and recording
artist from Jermyn, Pennsylvania with a sound well beyond her years.
Her voice is a combination emulating a throwback to 90’s country mixed
with a modern flair. The ability to captivate the audience from the
moment she steps on stage to the moment the crowd files out the doors,
Dani-elle always leaves her fans with a lasting impression. She has
shared the bill with artists Luke Bryan, Jason Aldean, Dierks Bentley
and more. Along with her busy schedule, Dani-elle makes time to give
back to the community and nationally with her position of being the
National Spokesperson for “Veteran’s Promise” as well as headlining the
“Positive Youth Tour,” a series of live shows performed at schools in
Pennsylvania’s Lackawanna and Susquehanna counties, where the concerts
include segments during which Dani-elle speaks to students about
following their dreams, bullying, and self-worth. This is only the
beginning and there is no stopping her now. Her fresh new look and
unique sound has her taking the Country Music world by storm one song at
a time. Stay current with everything Dani-elle Kleha on her website dani-ellesings.com.