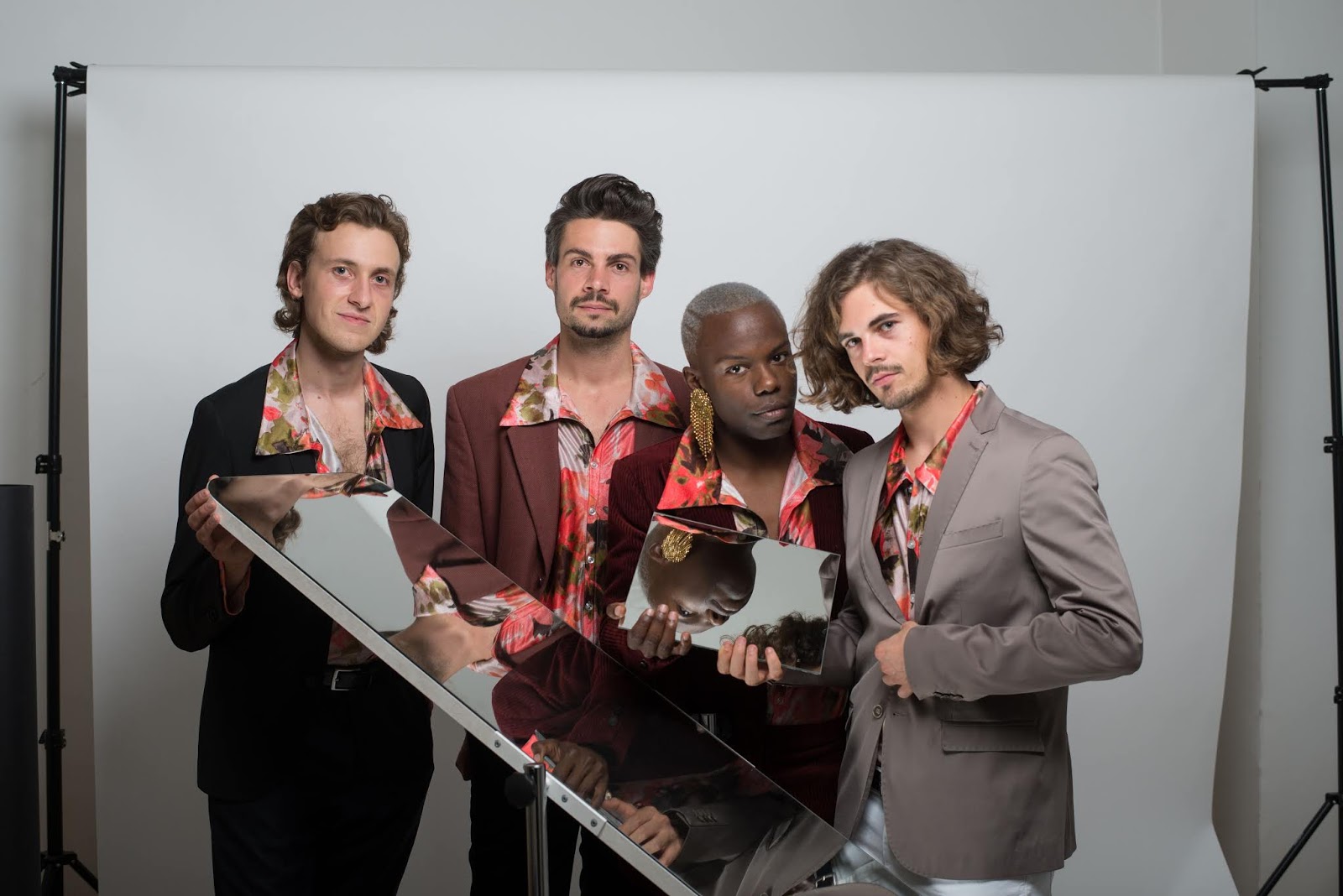 Answer:
We are 4 musicians of different social, cultural, ethnical and migrational
backgrounds and therefore faced different challenges. With Music we want to
overcome those challenges. Hence,
for us, diaspora-artists like Bob Marley, Freddie Mercury or M.I.A. are real
lions. Such
artists believe in themselves and therefore bring a new vision into the world,
which as well is our aim.

Answer:
The last year was crazy: we recorded our debut-album „Believe Us“, released three
singles and played some huge shows at the FM4 Frequency Festival and Reeperbahn
Festival. Now we started the year at the Eurosonic Festival and released yet
another single titled „Believers“ together with the album.

On the day the picture
of the cover was taken, Mwita‘s life and perception of the world changed. His
religious mother had him baptised against the will of his atheistic father.
This was one of the reasons why his parents ended up getting a divorce.
Disregarding the context (baptism/religion), what’s relevant here is, that both
were so convinced by their own belief in what’s right, that it ended their
relationship to one another and left their child divided: What is the “right”
belief? Who is to say what’s right or wrong?

Our debut album “Believe
Us” deals with such topics. It is a call up to believe (in) ourselves again. We
define ourselves predominantly through differences and we forget about the
universal faith in mankind. Our faith can move mountains, but only if we build
bridges instead of walls.

Answer:
With our latest single „Believers“ we want people to get into contact with
their innerselves, figuring out who they really are and where they wanna go.
Also its video toys with the song’s topic of believing by staging a live-show
as an almost religious ceremony in a way where you go deep into your own mind.
Therefore, it’s a worthy representative of our debut-album „Believe Us“.

Answer:
We can identify that there a new gatekeepers. Historically there have been this
big magazines in the German and British markets which where dominating the
public opinion. Since the introduction of streaming-platforms and the growing
importance of playlists there a new numbers and actors becoming relevant. The
way music is being consumed on these platforms in a rather single- and less
album-focussed manner will also have new effects on songwriting, production and
publishing.

Answer:
Definetly touring! It’s always such a great moment when you can connect to your
fans during shows, see new faces singing along to your songs and create a
special bound to the audience. It’s like a drug for us, we can’t get enough of
it.

Answer:
At our very beginning we got invited to play a show in Italy. Noone knew us
back then, so our expectations were pretty low. But as we all love to travel,
we accepted. Five minutes before the there was really strong rain and literally
noone was in front of the stage. As we started playing slowly but steadily
people started to show up, despite the rain! So at the end of the set we saw us
confronted with a crowd of crazy Italians who were dancing and singing along to
our music without even knowing us. This was one of those moments where you are
thinking „yeah, that’s exactly what I wanna do“.

Answer: Every
concert is kind of a spiritual fusion with the crowd and us. Everytime when
this fusion happens you feel a real great power in yourself. when that happens
the concert  is just amazing.

Answer:
We are trying to be disciplined as a band by getting up early and do like a
little tourist tour. So once we played at a festival in Skopje. No one of us
has ever been in Macedonia. After sleeping for about 3 hours we all got up at 7
in the morning and did our self-guided tour. It was tough, but definetly worth
it!

Lamitschka:
Most careers don’t last as long as yours.  What’s given your career the
staying power?

Answer:
The personal relations between us: We’ve met as strangers and now we are
brothers. We were walking together this whole rock’n’roll path with all its mountains
and valleys, this either makes or breaks you. Hence, we are proud of ourselves
that we always believed in us.