AS THE OLYMPICS BEGIN, ‘U.S.A.’ GOES GOLD AND PLATINUM WITH LEE GREENWOOD 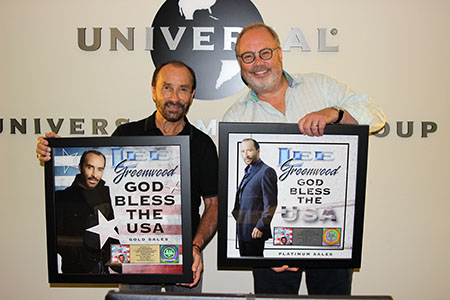 AS THE OLYMPICS BEGIN, ‘U.S.A.’ GOES GOLD AND PLATINUM

“Throughout our history, we’ve had songs that have been a battle cry,
that have given us courage and strength. Each time, people reach out
for something that will unite them, and make them feel proud as
Americans. And every time they look for it, they find “God Bless the
U.S.A.” So I sing it as much as a I can across America and I’m thankful
for every download,” Greenwood said.

As one of the most recognizable patriotic songs in America, “God
Bless the U.S.A.” went far beyond what Greenwood expected when he wrote
it in the back of his tour bus in 1983. The song has been in the top
five on the country singles charts three times (1991, 2001 and 2003),
giving it the distinction of being the only song in any genre of music
to achieve that feat. It was also No. 1 on the pop charts after 9/11.

This summer Coca-Cola also celebrated Greenwood’s mega hit with its
multi-platform “Share a Coke and a Song” campaign with his iconic lyric,
“I’m Proud To Be An American,” gracing the packaging of limited edition
cans and bottles nationwide.

ABOUT LEE GREENWOOD:
Throughout his expansive career, international country music star Lee
Greenwood has earned multiple CMA and ACM Awards, a GRAMMY for Top Male
Vocal Performance on “I.O.U,” in 1985, and a multitude of other
prestigious award nominations. His discography includes twenty-two
studio albums, seven compilation albums, seven No. 1 hits and
thirty-eight singles including songs like “It Turns Me Inside Out,”
“Ring On Her Finger Time on Her Hands,” ”She’s Lyin,” “I don’t Mind the
Thorns if You’re the Rose,” “Dixie Road,” “Somebody’s Gonna Love You,”
“Going Going Gone,” “You Got A Good Love Comin,” among others. His
stand-out hit “God Bless the U.S.A.” has been in the top five on the
country singles charts three times (1991, 2001 and 2003), giving it the
distinction of being the only song in any genre of music to achieve that
feat. It was also No. 1 on the pop charts after 9/11. Known for his
stand-out patriotism and support of the U.S. Military, Greenwood has
been honored with the Congressional Medal of Honor Society’s National
Patriot’s Award, and entertained troops on more than 30 USO Tours. His
latest book release is a children’s book called “Proud To Be An
American,” which is currently available in stores, on Amazon and LeeGreenwood.com.