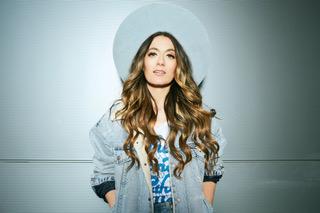 Alyssa Bonagura taking off on “New Wings” and “Paper Airplane”

Alyssa Bonagura taking off on “New Wings” and “Paper Airplane”

Hands up everyone who received their music diploma from Sir Paul McCartney?  Anyone?  Anyone?  Step forward Alyssa Bonagura.

Attending the Paul McCartney Liverpool Institute of Performing Arts – and having the diploma placed in her hands by Macca himself – is just one of the notable moments in the unique career of Nashville-area native Alyssa Bonagura, an accomplished singer-songwriter, multi-instrumentalist and producer. Her current release, “New Wings” is being followed by her newest song, the evocative “Paper Airplane.”

“It was three of the best years of my life,” said Alyssa, recalling her time in Liverpool.  “I was looking for a school that specialized in music production, but I didn’t really find any in America that I was excited about.  One day I was at a Christmas party with my parents and we met the English singer-songwriter Siobhan Kennedy who is from Liverpool. We were talking at the party and Siobhan said, ‘Have you heard of the Paul McCartney School?’ I said, ‘Are you kidding me? Paul McCartney has a school?’ She told me about it and the next day I applied. I told myself that if I was accepted that I would go.  Well, I got accepted and I received a full scholarship from Sennheiser, the German audio electronics company.  It was such a blessing.”

Alyssa has been surrounded by music since her birth, spending much of her childhood on a tour bus with her parents (Baillie & The Boys) and singing a duet, at the age of ten, with Kenny Rogers on his album, Christmas From the Heart.

“I’ve always been into music production ever since I was a kid,” she notes. “My dad had these 8-track minidisc recorders that I would start to layer harmonies on.  I was writing songs at, like, eleven and had all these parts and ideas in my head and wanted to record them.  We started building a studio in our attic when I was in high school and I’ve always been fascinated with music production.  It’s fun for me because I am able to get ideas out and record them myself and it gives me more freedom to be creative.”

Alyssa talked about her two most recent releases. “’New Wings’ was written during the pandemic. After the world kind of stopped in the very beginning of the pandemic, I was writing a ton of songs with other artists and songwriters over Zoom.  I started to really dive into Nature and go on hikes.  Every day I spent my time outside and tried to just be present in a weird, scary time.  My whole way of healing is writing songs.”

She explained the story behind “New Wings.”  “I’d found this legend by Paulo Coelho called The Lesson of the Butterfly.  In it, a man sees a cocoon hanging from a branch and a butterfly is struggling to emerge from it.  He watches it for a long time and feels bad for the butterfly and decides to help it so it can stop struggling. He gets a pair of scissors and cuts open the cocoon, but the butterfly falls to the ground because its wings are undeveloped, and it is unable to fly.  The lesson of the butterfly is that what it goes through is actually what makes its wings strong enough to fly.”

The story really hit home to Alyssa and inspired her to write what would become her song “New Wings.”

“I think we were all going through something, each with different stories of struggle,” she explained.  “2020 was like a cocoon year and I had to struggle through it so I could create my new wings so I could fly.”

The graphics that accompany the song capture the essence of the story. “They were created by an artist in the U.K. named Ben Rix who is so talented,” she said.  “I wanted it to show me in a playful world where everything was coming to life.”

Alyssa followed “New Wings” with “Paper Airplane,” the third release from her upcoming album.  It’s about a failed relationship but doesn’t focus on accusation and vindictiveness.

“’Paper Airplane’ is another song that really came to me through healing after going through a breakup,” she said.  I don’t believe in vindictive songs. I don’t like creating songs that would call out someone else.  When you really step back and look at where things went wrong, each person is to blame for their own stuff. Sometimes we don’t realize that until we take the time to be solo and reflect on it.

“This was really a reflection song for me, realizing that you’ve got to have your own stuff together and you have to heal a lot of past stuff before you get into a new relationship.  You can’t really make it if it’s not on a firm foundation.  That’s why I love the analogy of a paper airplane because it seems like it’s going to work, but it’s not made of steel and wood, it’s made of this whimsical idea.  Sometimes our relationships are like a paper airplane without the structure to hold them together over time.”

Formerly with Sony Records Nashville, Alyssa is now an independent artist and was attending Country Radio Seminar (CRS). “This is my first CRS and I’m so excited to be a part of it,” she said.  “We’ve been on the radio this year with ‘Paper Wings’ so to be included in CRS is a real honor. I’ve lived here my whole life and I grew up with country music parents so I’ve known about CRS, but I’ve never been able to be a part of it before.”

As a songwriter and producer, Alyssa has cuts on numerous artists including Steven Tyler, Joe Bonamassa, Jessie James Decker, Morgan Evans and Jo Dee Messina. She has recorded as a duo, named The Sisterhood, with Ruby Stewart after Ruby’s father Rod Stewart encouraged them to start a band because their voices sounded so good together.  They released a self-titled album in 2019.

As an opening act, she has shared the stage with artists as diverse as Ringo Starr, Jason Mraz, Marty Stuart and His Fabulous Superlatives, Sheryl Crow, The Who, Guy Clark, Jr., Steven Tyler and Rod Stewart, among others, all of whom have become her fans.

Now, in 2022, with three full-length solo albums and an EP to her credit, Country radio is sitting up and taking notice of Alyssa’s singles, “New Wings” and “Paper Airplane.”

Looking to the future, Alyssa said, “I’ve got some cool things planned and one of them is that I’ll be in Scotland playing at the Millport Country Music Festival, set for August 19 and 20. I’m really looking forward to that. Meanwhile, I’m finishing up my full-length album and I’ll be releasing it later this year. I felt that this year would be a very good year to introduce people to my music and build a following from the ground up so that in 2023 I could plan a little tour. In 2022 I’m going to keep releasing songs digitally and there are a couple of more things in the works.”

Alyssa Bonagura is a unique artist whose vocals and songwriting interlace country music storytelling with contemporary rock and even a dusting of Brit-pop.  Described by Barry Gibb of the Bee Gees, more than a decade ago, as “a future star in the making,” Alyssa has an army of fans in the USA, Europe and the UK.  Give a listen to “New Wings” and “Paper Airplane” and you’ll see why Rolling Stone hailed her as “a fixture on Nashville’s indie singer-songwriter scene.”

More about Alyssa Bonagura at http://www.alyssabonagura.com and on Instagram and Twitter @alyssabonagura. Stream “Paper Airplane” from your preferred music service at https://ffm.to/paperairplane?fbclid=IwAR372ZYUYQksLfpKeKOclI6tolU-kXagHMANoqbfbXfcCbx84RJo9mQgH2M. See her videos on her YouTube channel at https://www.youtube.com/channel/UCfsPvyTfwvfdLk8qeMzTOEw.