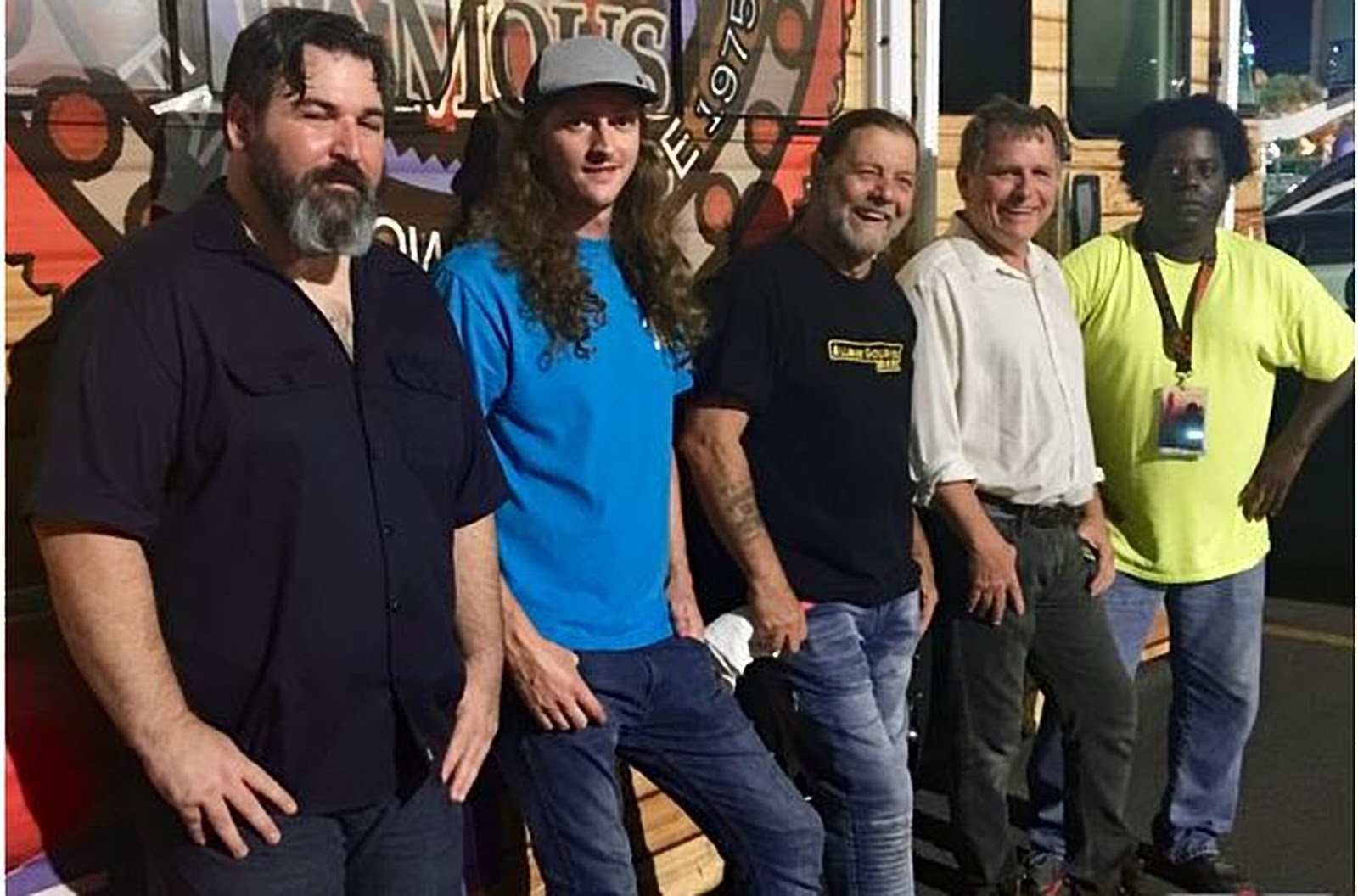 Lamitschka:  Music has many new fans throughout Europe who may be hearing about you for the

Answer: The
Allman Goldflies Band (AGB) is a group that gives a fresh take on an
original American music genre: Southern Rock. The band blends blues and
rock styles with tight double guitars and a driving rhythm section
featuring former Allman Brothers Band bassist David Goldflies topped off
with the vocals of Gary Allman who is a cousin of the great American
bluesman, Gregg Allman.

Answer: 2018
was a mixed year. It was the first time the band hit the road and we
had some great gigs and experiences. We released our first album: Second
Chance. And we won the L.A. Music Critics award for best Southern Rock
Band 2018.  Unfortunately, the band ran into an unethical manager and
that set us back. But towards the end of the year, the band did
a live-in-the-studio recording at WSRE public television in Pensacola,
Florida on a show called Studio Amped. The show can be found on Youtube.
We felt the live-in-the-studio taping really showed how far the band
had come. We also worked with conductor/composer David Ott who took an
interest in the AGB. David Ott wrote nine arrangements for our band and
the Panama City POPS orchestra. The debut of the orchestrated rock show
was to be on Oct. 13, 2018, in Panama City, Florida. Unfortunately, on
October 10, the worst hurricane in recorded history hit the Panama City
area and devastated the town. The show will be rescheduled and it will
be great to hear the songs from the Second Chance album, along with the
Allman Brothers Band Whipping Post and Midnight Rider performed.

Answer: We put out our first album: Allman Goldflies Band Second Chance in March of 2018. The album is getting great reviews and has generated lots of fans.

Answer: Our
vocalist Gary Allman was incarcerated in Federal prison. Upon his
release, he knew that this album, being the first made with his longtime
friend David Goldflies, would be his “Second Chance”.

Lamitschka:  Do you write the songs yourself? If not, how do you go about finding the songs for

Answer: Music
can be inspired by experiences we have in our life. It can also just be
created because certain sounds work well together. Second Chance has
both types of songs.  All the songs were written by Gary Allman and
David Goldflies with one of the songs, Southern’s All I Ever Want To Be,
having an additional lyricist, Cindy Menfi. Some of the songs started
out as an idea by Gary Allman.  Working together with David created the
arrangements that contained the double leads and melodies that really
make the album more than just a jam band. Both Allman and Goldflies
write a lot of songs so up to this point there hasn’t been a need to
look to outside songs to record and perform.

Answer: Given
the background of David Goldflies and Gary Allman, the main influence
is Southern Rock and Blues, particularly the music of the Allman
Brothers Band. Ever Been So Lonely Baby is just a straight up blues tune
with a section of two great guitarists riffing back and forth. The song
Fadiddle is a mix of bluegrass, metal, and a Slavic Eastern European
dance. When Jesus Calls, recorded with a live choral group, is a
gospel/rock song written in memory of Gary’s mother. Each song tells a
story.

Answer: When
we discovered that our former manager was, um, less than honest, we
wrote: “Watch out for the Fat Man.” It’s a bluesy tale of a corrupt
manager. We thought it would make a great single. It should be out soon
and we think he’ll love it!  😉

Answer:
We like to record songs and sounds that have meaning to us and our
fans. The guys in the band are really playing at a high level now and
it’s great to hear the music played back in the studio once recorded. We
love what we do.

Answer: It
was the low pay and long hours. I mean, come on, why would anyone do
this? But having worked as a sideman for years it finally became
important to try to add something original to the world. And by default,
that makes you an artist. Now the emphasis is on being a good artist!

Answer: A
really tight, Rockin’ blues band playing music that they haven’t heard
but turns them on. We give it 110% every time we play.

Lamitschka:  Many music fans today get their information about artists online. Do you have your

Answer: Our website is www.allmangoldfliesband.com.
The album Second Chance is available on all the online music sites such
as iTunes, Amazon music, Spotify, Youtube, and others. We also have a
Facebook fan page at https://www.facebook.com/AllmanGoldflies/

Lamitschka: So what is next for the AGB?

The
AGB had been approached to put together a new show that would be a
tribute to the music of the Allman Brothers Band. We know there are many
bands doing this but we feel that having David Goldflies, one of the
two surviving bassists of the ABB, along with Johnny Neel on keys (who
recorded and wrote material on the ABB Seven Turns album), and having
the vocals of Gary Allman, we will be able to take the idea of a tribute
to the Allman Brothers to a new level and really play the music in an
original and inspired way. Stay tuned on this as we are just starting
rehearsals for the summer tour now.

Answer: We hope to see you soon!