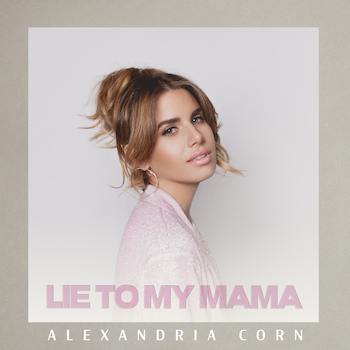 Pop/Country artist Alexandria Corn
spills the details of an on-again, off-again relationship in her latest
release “Lie to My Mama.” Despite her apprehension, Corn decides to
spare her mother the details of her breakup knowing she will feel the
same heartache she does multiplied by two. The emotional new single
written by Corn and Sam Grow is one of the most heartbreaking and honest
songs she’s released thus far. Fans can stream the single here.

“For
me, this concept is something that I haven’t heard yet in a song. As as
a girl growing up and entering the dating scene, there were so many
times that I just didn’t feel my relationship was where it should be. I
never wanted to share all those details with my mother because of all
the questions that would follow. So I would try and avoid them at all
costs and let her think everything was okay. I think a lot of women go
through feeling this way and I am just glad that we portrayed it with
this song,” said Corn.

Released
in March of this year, Corn’s previous single, “Cheated Better”, has
already been streamed nearly 50,000 times on Spotify. The singer has
been fortunate to open for artists like Toby Keith, Montgomery Gentry,
Deana Carter, Frankie Ballard, Granger Smith, Jake Owen, Chris Janson,
Blake Shelton, Thomas Rhett, Dan and Shay, Cam, and Lucie Silvas.
Currently, Corn is writing new music as well as performing at various
venues around Nashville and across the country. For more news, follow
her at herwebsite or on Instagram.

Alexandria Corn
is not your typical country singer. Hailing from Upstate New York, Corn
has a love for writing moody music with cultivating lyrics. After
making it to Hollywood on American Idol at just 17 years old, Corn
headed to Nashville where she met songwriter and publisher Jillian
Farrar. The two wrote her first single, “Say It Again,” which was
featured on VEVO Country. Throughout the summer of 2017, Corn opened for
Jake Owen at Coastal Country Jam, Chris Janson at Big Frog 104 Frog
Fest, Stagecoach VIP Party with Boots on Stage and has shared the stage
at Country Fest with Blake Shelton, Thomas Rhett, Dan and Shay, Cam,
Lucie Silvas and more. Corn has been nominated for multiple California
Country Music Awards including Entertainer of the Year, Female Vocalist
of the Year and Best Song of the Year. Her latest single, “Same Tattoo,”
received over 117,000 streams on Spotify in under three months. Corn is
set to release new music in 2020 and will be sharing select dates with
Sam Grow as well as Eli Young Band. For more information go toalexandriacornmusic.com.