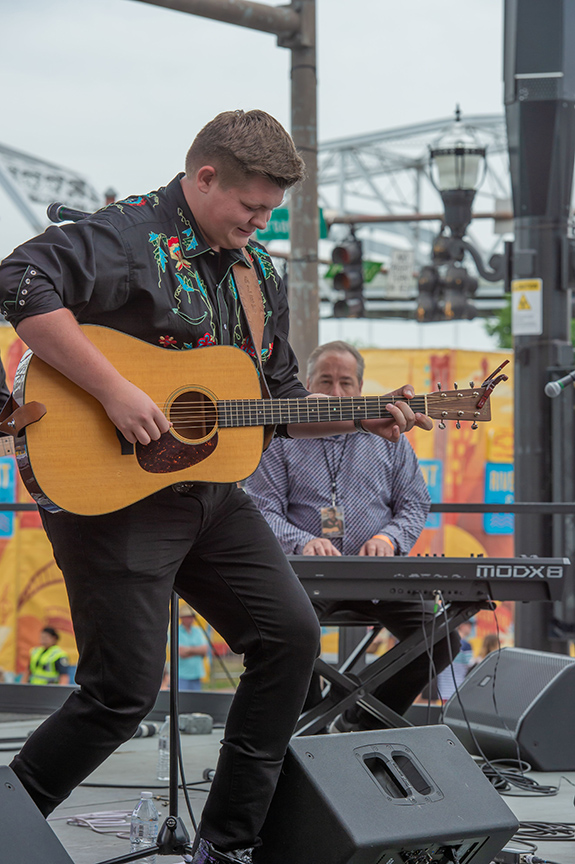 Traditional country music is alive and well – in the shape of Alex Miller. A genuine country boy – he works the family cattle farm – Alex found fame on ABC TV’s American Idol Season 19.  At the time, he was just seventeen and wowed all three judges with his self-penned song, “I’m Over You, So Get Over Me.” Judge Luke Bryan asked him, “What happens if you ever play the Grand Ole Opry?” To which Alex replied, “Oh, I don’t know, man. I’d die and go to heaven!” Luke said he’d try and make that happen.  Sure enough, Alex got the ‘Golden Ticket’ and was off to Hollywood and a national audience.

Now, the tall (6’ 6”) Kentucky native is regarded by country purists as The Real Thing: a torch-bearer for traditional country with a deep, arresting voice that defies his baby face appearance.

Despite his explosion on the music scene thanks to Idol, Alex is no newcomer to music, having performed in public since the age of seven around his hometown of Lancaster, KY, and further afield as his vocal and songwriting skills developed. In just the past couple of years, he has shared the stage with the likes of Hank, Jr, Josh Turner, Lee Brice and Shenandoah, and has performed at the Ryman Auditorium and at high-profile State Fairs. In October 2021, he was named Texas Roadhouse Artist of the Month.  Now aged eighteen, he has released his debut album titled Miller Time – although, ironically, he is still too young to purchase the adult beverage alluded to in the album’s title.

Released on the Nashville-based Billy Jam Records label, Miller Time is a showcase for his talent as both a singer and a songwriter with four co-writing credits on the album plus the solo write, “I’m Over You, So Get Over Me” that took him to Hollywood.

The album hits the ground running with “Breaking the Bank,” written by Alex alongside the album’s producer Jerry Salley. The witty lyrics and infectious tempo make this a song that Jerry Reed would have been happy to claim as his own.

Other standout tracks include the poignant “Boys in Uniform,” Miller’s take on the Hank Williams song, “I’m Gonna Sing” featuring The Oakridge Boys and the rollicking swing of “Girls Must Be Clumsy’ (“Girls must be crazy cos they’re fallin’ for me / I know it ain’t the money cos I’m broke as I can be”).

The first single from the album is “Don’t Let the Barn Door Hit Ya,” a rip-roarin’ Western Swing blazer with lyrics that are a perfect match for Alex’s dry humor delivery. Catch the fun video here: https://www.youtube.com/watch?v=6zccriNo1vE. Kentucky TV and radio host Maria Montgomery is cast as the unfortunate city girl who is having a hard time dealing with country life.  Shot in Alex’s hometown of Lancaster, KY, and on the family farm, the video also features several members of the real-life Miller family. Meanwhile, the track “Through With You” is already impacting the Billboard Indicator chart.

Alex took a brief break from his busy schedule to answer a ‘Preshias 12-Pack’ of questions.

A 12-Pack With Alex Miller

I want my fans to remember that I love them as much as they love me.

The most memorable performance was when I got to sing on the Ryman Auditorium stage. The Queen of Bluegrass Rhonda Vincent invited me to perform. It was my first time singing in Nashville and what a place to start!

I wanta be like Kenny Rogers and sing “Islands In The Stream” with Dolly Parton.

I’d be cutting hay, most likely. It’s getting to be that time of year.

Hello, I’m Alex Miller and I sing Country Music. But brother, I live and breathe it.

I’ve been listening to a lot of Charley Crockett in general lately. It just reminds me of my grandad.

I would put my name on “Detroit Rock City” by Kiss. Funny choice you’re probably thinking, but I would just love to see my guitar player’s face if he saw my name on that song!

I would’ve loved to have been at the Bristol Sessions when Jimmy Rodgers and the Carter Family cut their first records. I would literally be watching the birth of the genre I love.

I like to go fishing on the farm. It relaxes me and gets me away from the industry for a minute.

I like old Tom and Jerry. One of my first memories is watching the episodes with the singing cowboy mouse. It never failed to make me laugh.

I’d take his ability to fly so I wouldn’t have to fly on another damn airplane!

Well as you can see, Alex Miller is a real country boy with a great attitude and a sense of humor to match!