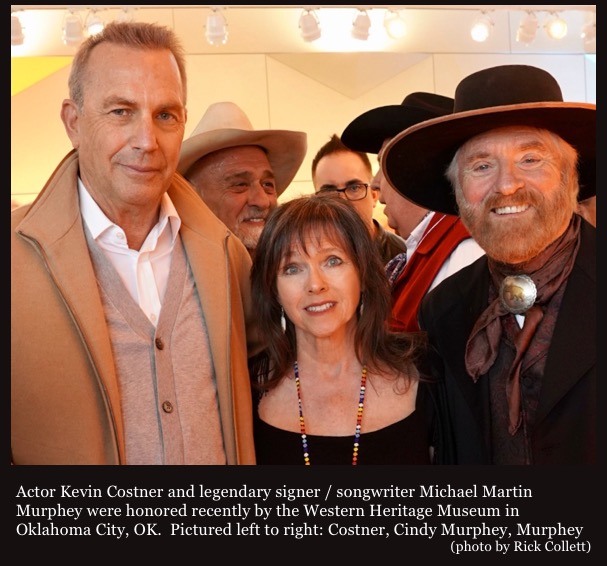 On
the bootheels of being given a Lifetime Achievement Award at the 59th
Annual Western Heritage Museum Awards in Oklahoma City, OK., legendary
singer / songwriter / Western Artist Michael Martin Murphey will be
appear at the Sellersville Theater — 24 W Temple Ave, Sellersville, PA
— at 8:00 p.m. on Wednesday, May 15. For information, visitwww.michaelmartinmurphey.com.

Murphey
was honored on April 13 with a Lifetime Achievement Award during the
59th Annual Western Heritage Museum Awards in Oklahoma City, OK.
Murphey, well known for his outspoken passion for the Western Lifestyle,
was given the honor in recognition of his nearly 50 years producing
celebrated Western music. (Other artists being honored at the event
include famed actorKevin Costner, three-time world champion steer roper (and father of Country Music iconReba McEntire) Clark McEntire, cowboy and former slave who discovered the first Folsom archaeological site,George McJunkin. Noted cowboy entertainer and musicianDave Stameywill be presented with the Chester A Reynolds Award, bestowed on a
living honoree who has demonstrated an unwavering commitment to Western
values and ideals.)

Murphey
is know for such huge hits as “Wildfire,” “Carolina In The Pines,”
“Geronimo’s Cadillac,” “Long Line of Love,” “What’s Forever For,”
“Cowboy Logic” and more.

Meanwhile,
Murphey is riding a wave of critical acclaim for his new album,
Austinology • Alleys of Austin, which features guest appearances from
pals Willie Nelson, Jerry Jeff Walker, Steve Earle, Lyle Lovett, Kelly
Willis, The Last Bandeleros, Bruce Robison, Gary P. Nunn, Randy Rogers
and more. The album is Murphey’s look at a period when he, Walker, Nunn
and a few others, pioneered the music scene in the Austin in 1968 –
1975, essentially giving birth to what is now called “Americana” Music.

Fifty
years after Murphey helped pioneer the Austin Music Scene (along with
Jerry Jeff Walker, Gary P. Nunn and more), his latest offering,Austinology • Alleys of Austin, is
a look at the seminal period of Austin’s music history that set the
stage for the “Outlaw” movement with Nelson and Waylon Jennings, among
others, and the live music scene that is still thriving there.

What is most striking aboutAustinology • Alleys of Austin,
is how relevant the songs remain. It is certainly not a trip down
memory lane as they clearly illustrate that great songs withstand the
test of time.