50 Years of EXILE: The Story of a Band in Transition – Available now

50 Years of EXILE: The Story of a Band in Transition – Available now 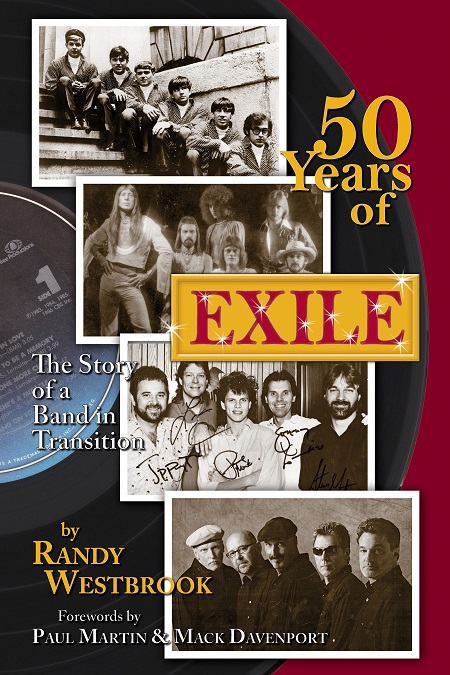 NASHVILLE,
Tenn. (September 8, 2015) – The story of one of the most successful
bands in Country Music history has been documented with the recent
release of the book 50 Years of Exile: The Story of a Band in Transition. Written
by Randy Westbrook, an Eastern Kentucky University musicologist, the
book details the group’s rise to prominence over the past five decades.

Founded in Richmond, Kentucky by Jimmy Stokley, Ronnie ‘Mack’
Davenport, Paul Smith, Mike Howard, Billy Luxon, Buzz Cornelison, and
J.P. Pennington – while all were still in high school – the band found a
following in the Lexington area. But, the Exile story doesn’t end
there. A stint on the Dick Clark Caravan of Stars in the mid 1960s
broadened their audience even more. During that stint, they opened for
such Pop acts as the legendary B.J. Thomas.

Continuing to record and tour throughout the late 1960s and early
1970s, Exile’s star began to shine bright with the 1978 release of the
single “Kiss You All Over.” After fifteen years in the business, the
band was suddenly an “Overnight Success,” with the song hitting number
one in the fall of 1978, and selling over 5 million singles. The
single’s massive commercial success introduced Exile as the new opening
act on the Aerosmith tour and then the Heart tour, respectively. The
group followed up that hit with another Top 40 on the Hot 100, “You
Thrill Me.”

In the 1980s, Pennington – along with members Sonny LeMaire and Les
Taylor – began to have success a songwriter in Nashville with cuts by
Alabama (“Take Me Down”), Kenny Rogers (“Take This Heart”), Janie Fricke
(“It Ain’t Easy Bein’ Easy”). That, combined with the fact that their
roots had always been steeped in Country (Pennington’s mother, Lily Mae
Ledford, was one of the stars of the iconic Renfro Valley Barn Dance), led them to sign with Epic Records in 1983.

Their first single, “High Cost Of Leavin,” found success at radio,
and set the stage for hit after hit throughout the decade. “Woke Up In
Love” became their first chart-topper, and it was followed by songs such
as “She’s Too Good To Be True,” “Hang On To Your Heart,” and “She’s A
Miracle.”

50 Years In Exile: The Story of a Band in Transition is an
honest look at one of America’s most enduring success stories, with
anecdotes from many of the band’s former and current members, including
Paul Martin, who later went on to fame as one of Marty Stuart’s Fabulous
Superlatives.

Praise for the book has come from a variety of critics and fans, with
Randy pinpoints individual performances, instruments as well as the
members themselves. Steve Goetzman, longtime drummer of the band, stated
“Randy pinpoints individual performances, instruments played and
recording techniques used, all in fine detail, yet in a language music
fans will enjoy reading. This musicologist’s analysis of song after
Exile song intertwined with an accurate history of a 50-year-old band
might set a new standard for music reviewers. Colorful personalities,
career-shaping decisions and solutions for longevity are talked about
here.”

Keyboardist Marlon Hargis says the book was educational – even for
him, “I learned things about the band that I never knew before! An
interesting history of Exile from a musician’s viewpoint. I recommend it
to any Exile fan, or any budding musician wanting a realistic depiction
of a band’s life!”

Published by Acclaim Press, 50 Years of Exile: The Story of a Band in Transition is
available in select bookstores and Amazon. The band continues to tour
in 2015, with dates already being added to their itinerary for 2016.