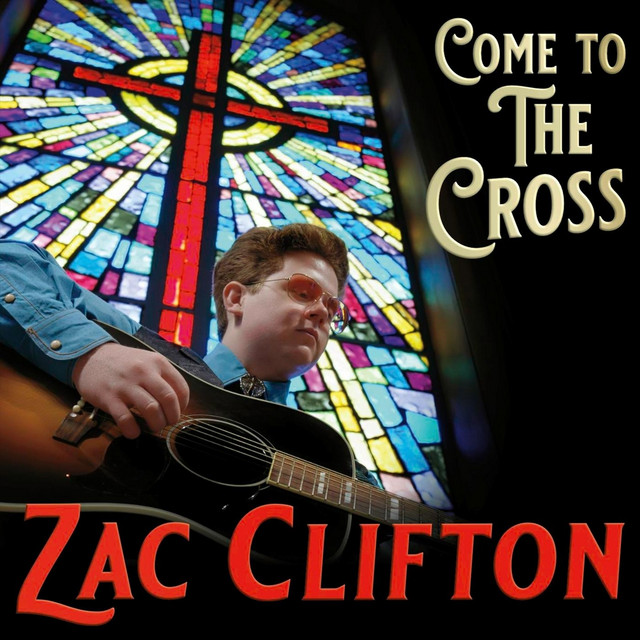 Zac Clifton Come To The Cross

Zac Clifton, 20, fresh on to the country music scene is sure to be around for decades to come. Having already been nominated for ‘’Male Artist of the Year’’ and ‘’Male Album of The Year’’ for ‘’Honky-Tonk Heaven’’ there is a lot more to come from an artist breathing a breath of fresh air in to Country and Western whilst retaining its traditional layout and structure. The album ‘’Come to the Cross’ takes you on a journey of despair and redemption whilst feeling hopeful and empowered at the same time.

The song consists of a four-bar intro followed by a sixteen-bar verse before leading into the chorus. Traditional instrumentation associated with Country and Western is used in the recording with the use of a fiddle, drums, guitar, bass, backing vocals, and vocals. The lyrical content is religious as Zac Clifton asks the lord to help him breakthrough throughout as he reaffirms his faith in the lord whilst suggesting that he is vulnerable and requires assistance to breakthrough the boundaries and obstacles blocking his path to righteousness. He believes the breakthrough will occur if he pleads enough with the lord to help him overcome the difficulties in his life. The song fits the bill when one thinks of typical Country and Western music.

The rhythm and tempo of the song takes a step back and the meter becomes 3/4 compared to 4/4 in comparison to Breakthrough and the instrumentation is the same. The tempo is slower and offers a much more reflective and laid-back feel whilst delivering the same story line concerned with religion and the necessity to place one’s faith in the lord. The lyrical content ‘’Satan longs to see your demise’’ and ‘’Salvation can be found in Jesus Christ’’ is sending the message to people that their sins can be repented and they can redeem themselves by praying to Jesus and the lord. The song reminds me of a Ballad as it narrates a story that suggests it was passed on from one generation to the next.

The tempo increases in ‘’Never’’ and the meter once again becomes 4/4 whilst using the same instruments as the previous songs in the album. ‘’There’s trouble everywhere, depression rules alongside despair’’ sets the tone for what is a song about people who may be going through adversity and might be reluctant to place faith in people or the lord. Therefore, ‘’Don’t back down and never lose faith’’ is a message of hope and resilience for those who have had their fair share of adversity to deal with. Zac Clifton reminds people they are not in this battle alone as people all over the world are going through either the same or similar difficulties and to ‘’never quit praying’’

The song takes on a slower tempo and pushes more of a reflective narrative where Zac Clifton is thanking God for all he has given him as well as guiding him through the difficulties in his life. For example, he sings about being baptised and that his body had been filled with the lord’s spirit and ‘’the rest is history’’ Zac continues to push the narrative that God can see the warning signs better than us. He thanks the lord for taking his sight which implies that his life took a turn for the worse and the only he could remain on the straight and narrow was by reaching out the lord for assistance and guidance.

Talk to The Healer

The tempo slows down again and the fiddle in the intro immediately made me feel as though I was in the deep south in the 1940’s as the song takes on what you would consider to be traditional instrumentation and structure associated with Country music. ‘’Pray to the healer’’ and ‘’he will take away all of your pain’ is another call to place one’s faith in the lord in order to live a more fulfilled and prosperous life.

Turn on The Light

The song has an injection of energy as the feel and mood of the song is a stark contrast compared to ‘’Talk to the Healer’’ The shuffle beat on the drums pushes the song in to what feels like more of a Blues song whilst the religious message and fiddle helps the song to retain the country feel. The song offers more hope with the refrain ‘’Turn on the light’’ which is repeated by Zac throughout the song.

Prayer of a Soldier

The meter becomes 6/8 and keeps the traditional country instrumentation whilst the tempo takes a step back ever so slightly to accommodate for the deliverance of a message from a soldier who is thanking the lord for escaping several near-death experiences by the narrowest of margins.

Come to The Cross

The name of the album and perhaps the most heartfelt and sensitive song on the album. This song comprises of a two-bar guitar intro followed by a more subtle vocal deliverance in terms of vocal timbre. The sensitive approach to the song eventually builds to a crescendo which offers an overwhelming sense of gratitude as well as weight lifted from one’s shoulders in the sense that one can lay their burdens down at the cross and Jesus will take care of your woes and forgive you of your shortcomings in life. The meter is 4/4 and consists instrumentally of drums, guitar, bass, fiddle, backing vocals, and lead vocals. It is an emotive piece of music that certainly tugs on the heartstrings of those who may be feeling down or as though they are missing something valuable in their lives.

The meter and tempo remain the same with fluctuation in dynamics between the verses and choruses. ‘’I am captivated by the holy spirit’’ reaffirms the storyline of the album which is Jesus, Christianity, faith, and worship. Country music, in this sense decorates a religious message and meaning and can also help those who are less religious to take a moment to reflect and think for themselves. The music allows the audience to take the message on board in a clearer fashion as opposed to sitting in a crowded church listening to the pastor or priest. Music, in this case, has the power to persuade people to become more faithful and spiritual.

The guitar intro sounds as though it briefly ascends and descends the blues scale and can be heard throughout whereas the drums and bass are locked in unison and push the song to create a bit more of a funk/blues feel. The message behind the music is his desire to keep the second amendment as the refrain in the song is ‘’You aint gonna take my bible and guns away’’ which of course will generate a great deal of popularity with southern states and Americans in general across the country. His message is that he is tired of seeing people killed but the blame should not fall with his guns or anybody else who has the right to bear arms.

The song takes on a more subtle tone instrumentally and also with regards to the meter and tempo. The song is emotional, and the soaring vocals help to intensify the emotions of those who can relate to losing a friend or a loved one. ‘’Have you spoke to Jesus?’’ and the way he delivers the refrain ‘’What’s heaven like?’’ creates a warm timbre as the song resolves itself back to the tonic. Ultimately, the album is consistent throughout with repetition of the same message which is to confide in God and pray whilst listening to Honky-Tonk.