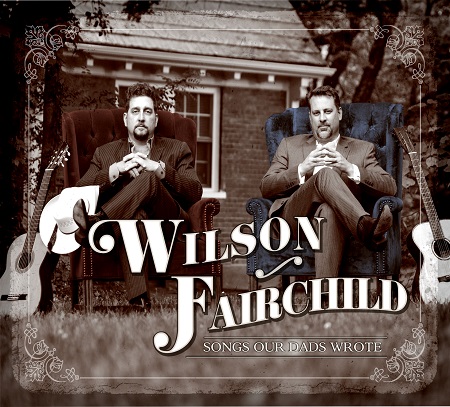 NASHVILLE, Tenn. (December 21, 2016) – Country music duo Wilson Fairchild is gearing up for their upcoming project, Songs Our Dads Wrote,
which will hit stores February 7. The duo, made up of Wil and Langdon
Reid, are honoring their fathers, Harold and Don Reid, who are both
founding members of the legendary Country Music Hall of Fame quartet,
The Statler Brothers.

The collection, which will be released via Sony Red / BFD, features
nine tracks originally co-written by Harold and Don Reid. A special
Wilson Fairchild penned tribute track, “The Statler Brothers Song,” will
be included in Songs Our Dads Wrote. Other standout songs on
the project include former Statler Brothers hit, “Guilty,” originally
released in 1983, when it stormed into the Billboard Hot Country Songs
top ten. The new version takes on a rootsy feel, with original Statler
Brothers member Jimmy Fortune also appearing on vocals.

“We’ve been wanting to record a project like this for a long time.
This is our legacy,” said Wilson Fairchild member Wil Reid. “These are
the songs we cut our teeth on and learned to sing with and play guitars
to. Hopefully we’ve brought some new life to some great old songs.”

The dynamic duo is wrapping up a successful 2016, which saw the pair
playing shows throughout the United States. As Wilson Fairchild sets
their sites on an even bigger and better 2017, they are pleased to
announce that they will be teaming up with A to Z Entertainment, Inc for
bookings.

Songs Our Dads Wrote Track Listing:
1. Left Handed Woman
2. I’ll Even Love You (Better Than I Did Then)
3. How Are Things in Clay, Kentucky?
4. She’s Too Good
5. Second Thoughts
6. Some I Wrote
7. Guilty
8. A Letter From Shirley Miller
9. He went to the Cross Loving You
10. The Statler Brothers Song

About Wilson Fairchild:
Wilson Fairchild is a country music duo made up of Wil and Langdon
Reid from the beautiful Shenandoah Valley of Virginia. These two men,
referred to as “the Reid boys,” have been writing, performing and
playing music together their whole lives. To sum up their passion and
drive for their music and career, a self-penned line from their new
title cut, “Country On”, says it all: “We love country music and we’ll
never let it die.”

Wil and Langdon are highly acclaimed songwriters. They both have been
writing songs since their teenage years, in between baseball and
football games and girls, of course. Along with recording their own
music, such artists as the Statler Brothers, Ricky Skaggs and Dailey
& Vincent have recorded their songs, as well. So yes, that means
their songwriting gamut spans through the country, bluegrass, and gospel
fields. They learned the craft from the best and know how to put an
idea to music and come away with a great storytelling song.

Fans can learn more at wilsonfairchild.com