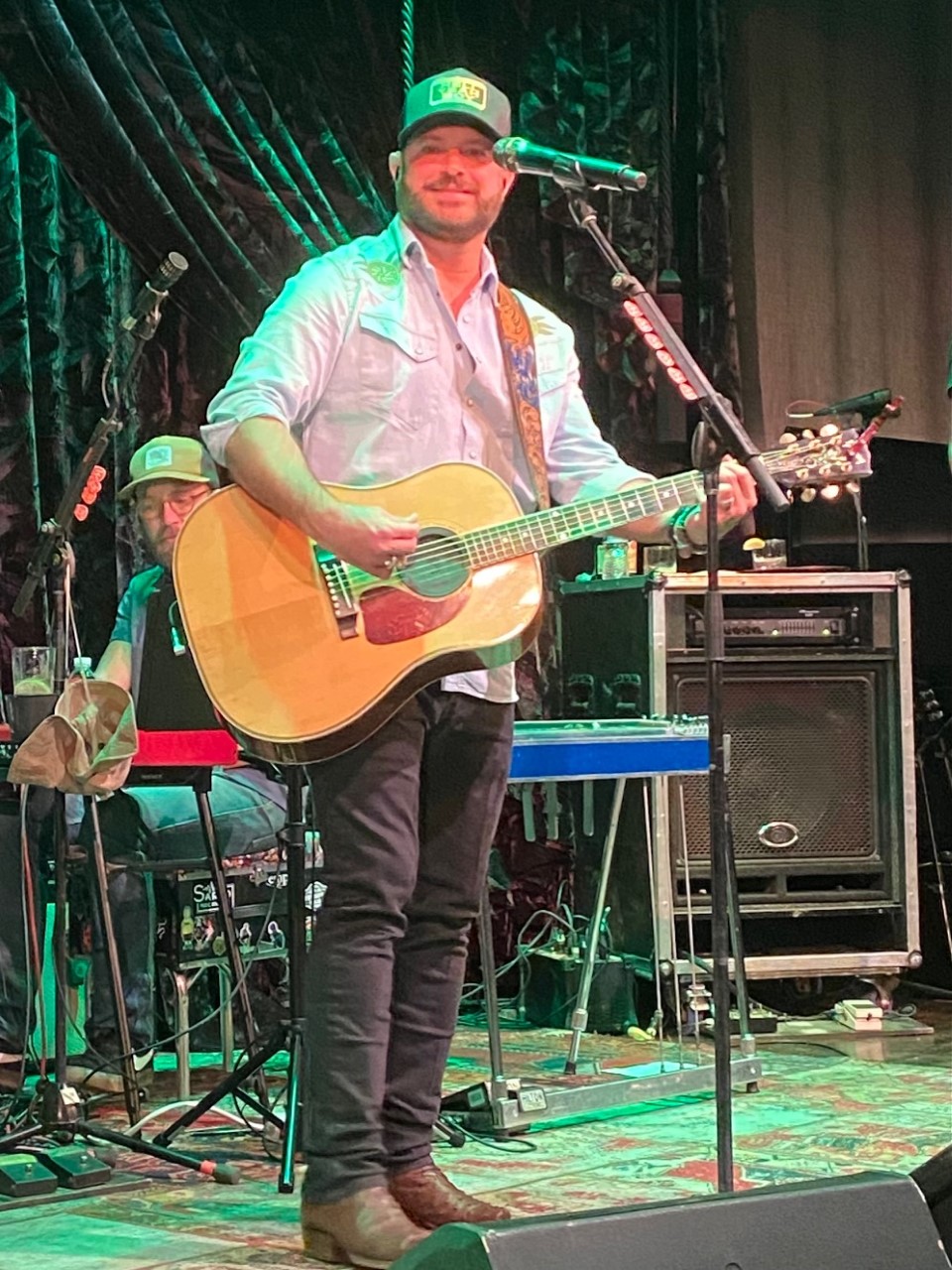 The epitome of the ‘Texas troubadour’ tradition, Wade Bowen is back with a new album, Somewhere Between the Secret and the Truth, available now from Thirty Tigers/The Orchard.

Over the years, Wade has built a growing army of loyal fans that now spreads beyond the borders of his home state. His unmistakable brand of traditional country now encompasses fans around the world.

On August 15, Wade hosted an invitation-only pop-up album release party for his new album, playing all the tracks from Somewhere Between the Secret and the Truth with a full band. The event was held at Analog in Nashville’s Hutton Hotel.  Before he took the stage, Wade sat down with me to talk about the new project and the challenges he faced while co-writing the songs during the Covid-related shutdown.

But first, I said to Wade that the album shows his love of ‘80s and ‘90s country music. I asked him what it is about that musical era that attracts him.

“Above all, it’s the honesty of it,” he said.  “I love the melodies and the lyrics but all of it goes back to being as honest as any music I’ve ever heard. They started writing songs about lying, cheating, honky-tonking, dancing, drinking beer and so on.  I’ve always just appreciated how simply they can put stuff and still have this creative appeal.  It’s a really hard thing to do.  Most importantly, the singers and the players of that era, they really have so much soul when they sing and play.  I still listen to it to this day when I’m driving around in my truck.”

One of Wade’s all-time music heroes, Vince Gill, joins him on “A Guitar, A Singer And a Song,” playing acoustic guitar, singing backing vocals and taking the vocal lead in a verse. The song feels like an intimate revelation of Wade’s relationship to the music in his life as he sings: “A guitar won’t change the world, but there’s times when I feel that it might.”

The album, in true traditional country mode, mixes tales of heartbreak, loneliness and lost love (“Everything Has Your Memory,” “Burning Both Ends Of The Bar”) with boot-scootin’ burners (“Honky Tonk Roll,” “She’s Driving Me Crazy”) that will have concert audiences up on their feet and yelling the chorus back at the stage.

Like most musicians, Wade was hit hard by the pandemic lockdown.  Not only did it put a hold on his touring, but he told me that he also went into what he called “a writer’s drought” where he couldn’t write a song because he didn’t know what to say or how to say it.  “Then I came out of it,” he told me, “and I started writing a lot.”  He now believes that the shutdown helped him stop and focus on what really matters.

During the pandemic, unable to meet up for writing sessions with other songwriters, he discovered ‘remote writing.’

“Zoom was something of a silver lining to Covid because the number of songs created during that time, by all of us songwriters, was huge,” he said, although he found it “weird” at first, being on a screen with somebody in a different city, writing songs together.

“Zoom opened up my world and so many of my songwriter friends’ worlds, too,” Wade admitted, “Being able to write in a different capacity. It’s crazy but we didn’t really have a way to focus on that [writing remotely] before or really think about it.  None of us thought about doing it until we had to.  I’m really glad we got to do that.”

The title track, “Somewhere Between the Secret and the Truth,” was written by Wade who lives in Texas and Lori McKenna who lives in Boston.  In fact, the song might not have even been included in the album.

It was then that he knew he had to include “Somewhere” on the album and it would be the title track. He had to put everything on hold for a month. “I had to bring everybody back in the studio, just to record one more song,” he said. “But I’m so glad I did. It really sums up not only this record, but ‘Somewhere Between the Secret and the Truth’ sums up country music, it sums up our lives.”

Fortunately, Wade was also the album’s producer, so it was his decision to make. “I’ve always been a very ‘hands-on’ artist anyway with my previous records,” he said. “I just like being the one who has the final say on stuff and kinda throw some salt and pepper in the pot when I think it needs it. Most importantly, I felt I had a good vision for the record.”

He added, “I write a lot of intense songs, a lot of sad, heartbreak songs and a lot of mid-tempo things that I love to create with drama and intensity with our shows and with my albums, so to have a song like ‘Honky-Tonk Roll’ where it throws all that out the window and mainly it just has a good time where we can crank it up and party for three-and-a-half minutes.  That’s a lot of fun and we’ve really enjoyed it as a band.”

Somewhere Between the Secret and the Truth is a delight for fans of traditional country and for anyone who is hungry for songs that weave relatable tales of life and love.

Play/download/stream Somewhere Between the Secret and the Truth from all leading digital services at https://orcd.co/somewherebetween Tour info, music, merch and more here at  https://wadebowen.com (@wadebowen)