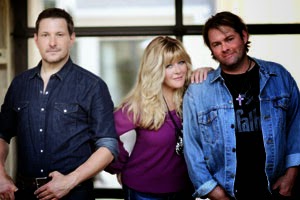 NASHVILLE, Tenn. (November 22, 2014) –
There’s an old saying about there being strength in numbers. Country
Music fans will no doubt find that out with the upcoming tour that teams
up three of Country Music’s most distinctive stylists of the past two
decades – Ty Herndon, Andy Griggs, and Jamie O’Neal. Separately, the
numbers don’t lie – and together, they are staggering – over 40 chart
singles on the Billboard Country Singles chart and millions of records
sold. Each artist has their own success story to tell, but when they are
on stage, it’s truly a magical combination – one that will stay in the
minds of fans well after the last bow.

Talk to either Ty, Andy or Jamie, and you will find nothing but
respect for the other two artists. Andy said that he’s excited to be
teaming up with a pair of artists that are among his favorites, though
he does admit that opposites do attract. “We all blend together about
like Tupac, Bill Monroe and Joan Rivers but somehow it works on stage!
Go figure! But when we’re not singing our hearts out together it’s the
most awkward, misplaced, dysfunctional, hilarious carnival that has ever
been displayed!” Andy expects being on the road with Ty and Jamie to be
nothing short of…entertaining.

When discussing Jamie, Andy says “Take a phenomenal female vocalist.
Now add a husband to go with that that has to carry her 10 piece luggage
all over God’s creation. Then, mix it with her having to put up with 2
guys that are more different than night and day and can’t even agree on
having a vocal rehearsal which in return drives her so far up the wall
that she’s on verge of quitting the whole tour at any given moment of
any given day and that’s Jamie,” he says, adding that Ty is also an
interesting character, as well.

“God certainly displays his amazing sense of humor each time he
places me and Ty on tour together! I’ve never known a guy that I had
half of the things in life in common with (born in the Spirit filled
Bible Belt, completely southern, in love with the same kind of
music…etc..) but then again can’t be any more different than John
Wayne and Prince! There’s no way for us to completely understand each
other’s taste buds of life and we don’t even pretend to try. That would
be a total waste of each other’s time. It’s the strange ironies and
upside down compasses in life though that makes us all rich. With Ty and
myself, we share 2 of the rarest things in common. I suppose they out
trump the mountains of shortcomings and differences that lay between us.
Those two qualities we share are: being real and true to our natures,
and being friends.”

Jamie feels that the new partnership will definitely be entertaining –
on stage and off. “I’m so excited to be a part of this. Ty and Andy are
two of the best male vocalists from any genre. They’re so funny, good
looking, and just a couple of goofy smart asses! I just couldn’t resist.
Ty is the most well put together, smoothest control freak I’ve ever
met. Andy is a cute, lovable redneck with the softest heart. I only know
when we sang together for the first time something very special
happened and here we are, taking the next obvious step.”

Ty believes that the fans are going to get their monies worth when
seeing their show live. He knows he’s been entertained from the stage.
“The first time the three of us did a show together I wondered how in
the world this would ever work. At first we did separate shows, but as
time went on we started doing our shows together. The crowd seemed to
love the fact that they got all these hits in one 2 hour show. Then we
started singing harmonies with each other. I noticed pretty quickly that
we had something special. Three powerhouse vocalists coming together
and taking things to a new level. I first noticed it when something went
wrong on stage and we had to save our asses by singing something
acapella. ‘Amazing Grace’ never sounded so good. It was magic!”

About Ty Herndon:
Ty Herndon was born in the heart of Mississippi, and was raised in
Alabama. He grew up enamored with much of the Gospel music that was
around the south, performing around home as a teenager. After high
school, he moved to the Lone Star State, where he developed his craft so
well he was named as Texas Entertainer of the Year in 1993. Not too
long after that, Ty found himself on the roster of Epic Records. His
first single, “What Mattered Most,” topped the charts in the summer of
1999, and led to other number ones as “Living In A Moment” and “It Must
Be Love.” He notched a pair of Gold albums for his first two releases – What Mattered Most and Living In A Moment. The
past few years have seen no end to Ty’s artistry – as he earned a Dove
Award and also a Grammy nomination for his 2010 release “Journey On,”
and received some of the most sterling reviews of his career for his
thought-provoking “Lies I Told Myself,” from his album of the same name.

About Andy Griggs:
Louisiana native Andy Griggs was a one-time minister in his home
state before being signed to RCA Records in the late 1990s. His 1999
debut, “You Won’t Ever Be Lonely” (from his Gold-selling album of the
same title) was one of the most played hits of the year, paving the way
for such future hits as “She’s More,” “I’ll Go Crazy,” and the powerful
“If Heaven.” Andy has collaborated with some equally talented artists in
the past – such as Martina McBride, Blake Shelton, and one of his
heroes, Waylon Jennings – with whom he teamed up on his debut album for
“Shine On Me.” Andy’s soulful delivery can ooze romance or bring people
to tears – especially on ballads such as 2013’s “20 Little Angels,” a
song after the tragic events of Sandy Hook, CT. The singer also earned
quite a bit of attention for his all-acoustic album Naked, which was also released in 2013, and for this year’s Triple Play EP, which was released on iTunes.

About Jamie O’Neal:
Performing comes very naturally to Jamie O’Neal. She started
performing in a band with her family in Australia.  Jamie signed with
Mercury Records in 2000. Right off the bat, she scored with not just a
“Hit” record, but an instant classic with the haunting “There Is No
Arizona.” Her follow-up, “When I Think About Angels,” also hit the top
of the charts, helping to propel her debut disc, Shiver, to
Gold status. She hit pay dirt time and again with other records like
“Tryin’ To Find Atlantis” and “Somebody’s Hero.” Her 2002 collaboration
with Mark Wills, “I’m Not Gonna Do Anything Without You,” remains a fan
favorite to this day, and she was featured on the soundtrack of the box
office hit Bridget Jones’ Diary. Eternal, her most recent
album, contains her take on many classic songs by some of her favorite
artists – including a smoldering take on Larry Gatlin’s “I’ve Done
Enough Dyin’ Today,” as well as a take on the George Jones and Tammy
Wynette classic “Golden Ring,” with Andy.